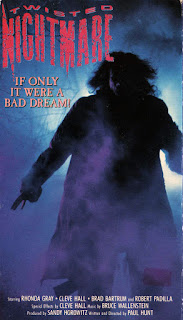 I'll start this review off by stating a simple, unarguable fact: TWISTED NIGHTMARE is not a movie. It’s a product. Everything you would expect from a movie is missing. There are no characters, just bowling pins. There is no real narrative, just an ever-escalating series of brutal murders. It has the appearance of a movie, even having a beginning, middle and end. But in between all the requisite bits and pieces one would need to gather in order to make their product feel like a movie, there’s nothing. It’s as empty and hollow as it ever could be.

The central plot set-up, if one could call it that, is simple. A group of teenagers all receive mysterious invitations to a gathering at a summer camp, the same summer camp they all frequented back in the day. They are all presumably friends with deep histories. Laura, the female lead, has brought along her new boyfriend. She has a brief dialogue exchange with the gorgeous, blonde Julie, during which it is hinted that Julie once had a habit of stealing her friend’s boy toys, or so we assume. We meet muscle bound Dean and quickly learn that he’s an asshole. We can assume he had a falling out with the rest of the group some time ago. Our group of teens run into the Native American handyman, Kane, or at least we assume he’s the handyman.

That’s one of the big problems with TWISTED NIGHTMARE. We need to assume a whole bunch of things. Laura’s developmentally challenged brother died at the camp a few years back, inexplicably exploding into flames while hiding in a nearby barn (fans of FRIDAY THE 13TH, PART III will recognize the location), the result of some bad Native American joojoo. We learn that his body was never found. Is that why this summer camp appears to be closed in the middle of summer? Is it now derelict or abandoned? Why does no one seem to know who Kane is if he really is the handyman around the camp? And why does no one question the mysterious invitations they all received in the mail?

I have absolutely no idea because the film doesn’t seem to give a shit about anything it’s presenting to us. Characters have histories we never learn about. Characters have motivations they never share with us. Even the explanation for why all of this is happening isn’t fully thought out or well explained, just hand waved away as evil Native American magic. Laura’s brother was first burned to death by some ancient evil, then resurrected as a snarling, drooling monster with a penchant for mutilation. Laura, we’re led to believe, has somehow concocted all of this, bringing her friends back to camp like lambs to the slaughter, allowing her demon-brother menace to wipe them out for… Well, I don’t know what.

After all, it isn’t the fault of her friends that her brother met a fiery end. That was all the result of Native American demons angry that the camp was built over top an Indian burial ground (I think). Most slasher movie villains have an air of the anti-hero about them. Marty Rantzen throws a mock high school reunion so he can viciously murder the gaggle of teens involved in his disfigurement. The killer in PROM NIGHT is avenging the death of his little sister, the unfortunate outcome of a childhood game gone tragically wrong. But the killer in TWISTED NIGHTMARE isn’t even laying waste to a guilty party of callous brats. I kept expecting a last minute twist in which Laura realizes that she’s not in cahoots with the killer, but that the killer is simply a manifestation of ancient evils out to punish anyone invading their sacred land. But nope. That would have required thought and energy.

TWISTED NIGHTMARE exists solely for the rending of teenage flesh. Back in the early 80s, Roger Ebert coined the term “Dead Teenager Movie” to describe the slasher film. His definition of the term was rather simple. Here’s a group of teenagers, now watch them die. He viewed the slasher film as an empty, nihilistic brand of exploitation. Now, while that isn’t necessarily true, it’s also not necessarily false, but most slasher films at least gave their characters backstories and personalities. They at least gave the characters a chance at survival. I’m surprised TWISTED NIGHTMARE even gave them names.

This isn’t a slasher movie. It’s bowling. Deaths come at a steady clip with nary a character moment in between. Characters just wander off and die at regular intervals, usually after taking off their clothes. It’s as minimalist and perfunctory as you can get, and while I’m not some raging moralist who has a problem with wanton destruction and bloody movie violence, it would be nice if a film actually tried to inject some level of humanity into the proceedings. TWISTED NIGHTMARE is a humorless affair with no interest in creating any semblance of human characters. In fact, the character who becomes the Final Girl of the film is just some throwaway blonde who spends much of the third act locked inside an outdoor freezer. Was I really supposed to care if she escaped?

It would be nice to have a single character to root for or care about, just one goddamn character to hang my hat on apart from the girl whose brother spontaneously combusted inside a barn two years ago. It would be nice if the gaggle of teens actually talked to one another outside of the sex scenes. It would be nice if the film made any sense or actually built to a conclusion that felt earned. But as it stands, all TWISTED NIGHTMARE could offer me was a parade of poorly filmed, never convincing murder set pieces. I spent 90 minutes with TWISTED NIGHTMARE. I could have spent five minutes watching any of the thousand “INSERT MOVIE TITLE HERE – KILL COUNT” videos on YouTube and my experience would have been just as fulfilling.
Posted by David Grant at 10:05:00 PM
Email ThisBlogThis!Share to TwitterShare to FacebookShare to Pinterest
Labels: 1982, 1987, Devon Jenkin, Horror, Paul Hunt, Rhonda Gray, Slasher film, Twisted Nightmare