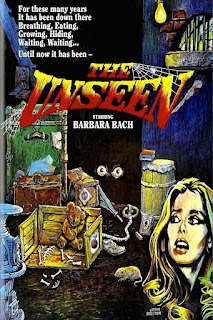 Future FRIDAY THE 13TH, PART V: A NEW BEGINNING director Danny Steinmann’s 1980 pseudo-slasher THE UNSEEN begins in grand Hitchcockian style. Borrowing a page from REAR WINDOW, Steinmann begins his film with nothing more than pictures and set dressing. We see a photograph of a beautiful woman (that would be Jennifer, played by the always exquisite Barbara Bach). It’s a professional photograph, the kind that would be used in print ads. We see shelves lined with sports trophies. A few shots later, we see a man’s leg, a large scar on his knee. The man’s name is Tony. Jennifer appears in the room, in her hands is a large overnight bag. She storms out, leaving Tony to meander around the room alone. This relationship is clearly on the rocks.

Jennifer meets with her two friends, camerawoman Karen and Vicki, her little sister. The three women head to Solvang, a Danish community in Southern California (and yes, it is apparently a real place) to film a news feature on the town’s annual Danish parade. Jennifer is a news reporter and damn glad to be taking this trip. She needs to rethink her relationship with Tony, a professional football player sidelined (perhaps forever) with a bad knee injury. She’s also pregnant and wanting an abortion.

After arriving in Solvang, the gals discover their hotel reservations have gone missing. With no place to stay, they hit up another local hotel hoping to book a room. Alas, this old hotel is no longer a hotel, but a living history museum. They meet the owner, a meek and lightly strange man named Ernest. Just before the girls leave, Ernest decides to make them a friendly offer. They can stay with him at his home. Because this is a horror movie, the girls immediately accept the offer.

Upon arriving, they meet Ernest’s perpetually distraught wife, Virginia, and settle into their rooms. Vicki is tired and in need of a bath so she hangs back while Jennifer and Karen hit the town to get some footage of the parade. As she lounges in the tub, Ernest spies on her through a keyhole. Vicki’s day goes from bad to worse when she is dragged into a heating vent by someone – or something – with obvious anger management issues.

So far, so fine. It’s your standard horror set-up. Young, lovely lasses accept an offer of shelter from a kindly stranger only to meet sticky ends at the hands of a maniacal family. But something is definitely off here. First, the setting is clearly quite strange, set up in a way to simulate the typical ‘fish out of water’ horror trope without ever having to spend the dough on stock footage of a plane landing and maybe a few foreign sounding street signs to sell the illusion that we’re no longer in Kansas anymore. I'll freely admit, going for a California Danish town instead of simply pretending to be in an actual Danish town is ballsy and unexpected, but let's not mince words. A backwoods community would have sufficed. But that's only the tip of the strange iceberg that is THE UNSEEN.

What kind of news crew sends two women, one with a 16mm camera and the other with a microphone that’s very clearly not plugged into anything, to film a news report? That seems a bit odd. And if Solvang is a few hours car ride from home, why do these women even need a hotel room in the first place? Couldn’t they just drive home? Why do we cut to Virginia graphically decapitating a live chicken or to a shot of a cat licking a shoe? Is it just to accentuate the weirdness of the whole damn film? Maybe it’s best not to dwell on the particulars, but Steinmann is clearly up to something here. Jennifer divulges her pregnancy to Tony while puffing on a cigarette. Ernest’s past trauma is delivered completely through auditory flashback, his angry father’s voice pitched one notch below R. Lee Ermey’s Gunnery Sergeant Hartman. Maybe this wasn’t ever meant to be a straight horror film at all? Maybe, just maybe, instead of screaming, I'm supposed to be laughing?

Ernest’s dirty little secret, in case you’re wondering, is that Virginia is not really his wife. She’s his sister. Ernest had raped Virginia many years ago, a terrible act which resulted in a pregnancy and the end result of said pregnancy was Junior, a gibbering slob they keep locked up in the basement. Junior mistakes our bubbly leads for playthings, resulting in Vicki and Karen’s deaths. Realizing the gravity of the situation, Ernest locks Jennifer in the basement, hoping Junior will snap her pretty neck. Unfortunately for Ernest, Virginia is getting awfully sick of his cruel games and Junior… well, Junior isn’t too fond of his dad either.

The final act of THE UNSEEN is one of the strangest final acts in all of horror. Practically wordless, much of the action focuses on a four way fight for survival. Not only is Jennifer fighting to survive, but Ernest, Virginia and Junior take their sweet time bashing, slapping, clubbing, pushing and punching their way through long standing family resentment issues. Although 99% of the finale occurs in a basement, Steinmann still finds a way to soak Barbara Bach’s ultra thin shirt with water, even offering up what could be seen as a dry run for Pam’s slow crawl away from Roy during the ending of FRIDAY THE 13TH, PART V: A NEW BEGINNING.

As the villain of the piece, Junior is, shall we say, problematic and not just because the make up effects for the character were purposefully designed to make Junior look as if he had down syndrome (it was the 1980s, people). Junior is meant (I think) to be sympathetic. He doesn’t attack Jennifer when he first meets her. He tries playing with her. He even gives her a teddy bear. He also gibbers and moans CONSTANTLY. Ceaselessly. Endlessly. Infinitely. And as we spend a good three or four minutes with Junior and Jennifer before all hell breaks loose, Junior stops being threatening and starts becoming insufferable. Worse, Steinmann and Co. have him bounce around the room like a gorilla, slapping himself in the chest, bellowing and grunting like Kong trying to impress Ann Darrow. It’s both laughably lame and yes, completely distasteful.

But again, I don’t really know what the fuck this movie is even trying to be. If it’s comedy, it’s bad comedy. If it’s horror, it’s bad horror. Once I reached the point in the film where Ernest placed clothes pins on his nose to threaten his sister/lover/punching bag, my brain just kind of shut off. I gave up, or gave in, or whichever. I sat there and allowed the film to take me wherever it wanted, and where it took me was so damn bizarre that I left somewhat impressed. It’s a minor miracle that a film like this was ever made within a studio system, let alone attracted talent like Bach, Sydney Lassick and Lelia Goldoni. It’s a Bizarro World rendition of TOURIST TRAP or THE FUNHOUSE. I mean, did Steinmann and Co. really give Jennifer an unwanted pregnancy in an attempt at arguing that it would be better to abort a child than have it born into a dysfunctional family, that giving birth to an unwanted child is to run the risk of giving birth to a drooling, unibrowed halfwit with murderous tendencies?

You know what? Maybe it really is best not to dwell on the particulars. At the end of the day, THE UNSEEN is odd enough to recommend, but too damn weird to truly love.