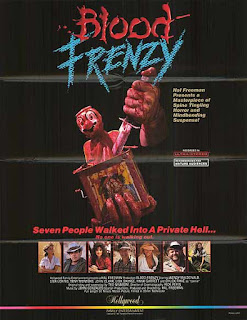 The set-up is pure THE HILLS HAVE EYES. A camper full of people gets waylaid in the desert by someone – or someones – out for blood. In execution, however, Hal Freeman’s 1987 slasher flick BLOOD FRENZY is little more than a workaday blood bath with no social conscience in sight. It’s the kind of film in which every character is potentially the killer, a choice which greatly undermines any emotional investment it might have been able to muster up.

The folks in the broken down camper in the middle of the Mojave desert (of all places) are there for a weekend “confrontational therapy session” led by Doctor Barbara Shelley. Shelley’s motley crew of clients include traumatized Vietnam vet Rick, conniving lesbian Dory, middle aged alcoholic Crawford, gorgeous nympho Cassie, irascible asshole Dave, and Jean, a woman terrified of being touched. Immediately, things go bad. Dave is nearly knifed by Rick when the obnoxious prick knowingly triggers Rick’s ever-worsening Nam flashbacks. Dory’s temper flares when Cassie turns down her offer of a little girl-on-girl action. Things seem to be building to a fever pitch. When the group wakes one morning to find Dave dead in his tent, you can feel the film bracing for a descent into fiery confrontation, paranoia and bloodshed.

But then BLOOD FRENZY does something a bit unexpected. It dials itself way down and stays way down for the rest of the film. Just when things should be picking up momentum, Freeman grinds the film to a halt, eschewing any possible character driven, murder mystery angle for slow paced slasher movie theatrics. And ‘slow paced’ is not this film’s cup of tea.

The first half hour of the film is a parade of histrionics, beginning with a flashback murder set piece detailing the death of an abusive, drunk father at the hands of his child. Arterial spray galore. Once we move into present day, the arguments begin. Characters shout at one another endlessly. Rick stares off into the distance, all but muttering “Charlie in the trees...” over and over again as he recounts his time at war. Dave’s hyper aggressive masculinity results in frequent shouting matches with the equally predatory Dory. Cassie seductively licks a spoon while flirting with every man in the camper. Crawford’s drunk ramblings begin to sound like beat poetry. Once they arrive in the desert, everyone is at everyone’s throat and punches are not being held.

This first act is loud and ridiculous, verging on comedy, with performances so broad you'd need a whaler to cross them. So the sudden shift in tone from cacophonous and hyperbolic to slow and measured doesn’t quite work, especially since the characters don’t shift with it. They remain every inch the easily triggered, over emotional train wrecks prone to making bizarre decisions. After one of the group commits suicide via stick of dynamite, a shell shocked Cassie wanders over to Dory with a disembodied hand. Without so much as missing a beat, Dory whisks her away to an abandoned mine and swiftly seduces her. It’s the kind of scene that would leave even the most hardened of bad movie aficionados to question just what the hell they’re watching.

This weird conflict between tone and presentation never sorts itself out. The film remains in this strange limbo between genuine horror film and off-kilter black comedy. It’s like listening to a song played at three-quarter speed. It just feels… off.

The odd concoction of serious tone and playfully inept execution might undermine the scare potential of many of the late game slasher set pieces, but BLOOD FRENZY most certainly isn't anemic. What it lacks in frights, it more than makes up for in viscera. Characters die and die bloody. Cassie’s long and torturous death scene is easily the highlight, a gratuitously violent bit of mutilation that might not be convincing, but sure as shit is effective. The final fight is a four way struggle for survival during which buckets of blood are spilled, characters scream unintelligible lines at one another, and someone tosses a mining pick through the air, embedding it in the killer’s back in a way that defies all known laws of physics.

Many times I didn’t know what the hell I was supposed to be feeling. Am I supposed to be frightened? Worried? Thrilled? Amused? I simply couldn’t tell because the film had left the realm of reality for something approaching lunacy. The over the top violence of the final act certainly sent BLOOD FRENZY out on a high note, but for much of the film, I found myself rather nonplussed. I’m generally not a fan of the “just turn your brain off and enjoy” line of reasoning as I think actively watching a film is more enjoyable than merely passively swallowing whatever the film throws at you. But with BLOOD FRENZY, I think it might actually be best to just sit and drool through it.