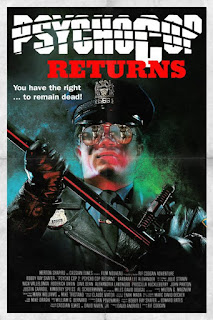 I will begin this review by stating that I have never seen PSYCHO COP. I have no idea if it’s meant to be a riff on Bill Lustig’s MANIAC COP or not (though it surely must be, right?). I have no idea what if any, shall we say, lore I’ve missed out on. I don’t know what the tone of the film is, if it’s played straight or for laughs, or whether or not it’s even a decent watch. By all accounts, PSYCHO COP is a bad film, but if Adam Rifkin’s 1993 follow-up PSYCHO COP RETURNS is any indication, I’m not sure the franchise creators view “bad film” as a pejorative.

PSYCHO COP RETURNS kicks off in a diner with smug, obnoxious Larry and skittish Brian going over the plans for a late night office bachelor party for their pal Gary. Despite the fact that there’s a cop sitting directly in Larry’s eye line, he loudly asks Brian if he managed to score some weed. That triggers the cop to passive aggressively threaten our blue collar leads. On their way back to the office, Brian notices that the cop from the diner is following them. This isn’t just any cop, mind you. This is the titular Psycho Cop, a kinda/sorta undead Satanist with a passenger seat full of rotting body parts.

Once the office closes for the night, Larry bribes the night watchman to let a few prostitutes into the building. And thus begins the bloodbath. Once Psycho Cop tricks the night watchman into letting him inside, the madman begins systematically eliminating every ‘law breaker’ he comes across, from an adulterous putz and his bleached blonde squeeze to the poor night watchman who just wanted to watch a baseball game on TV.

Now that sounds like a whole lot of fun, a real nice subversion of the typical slasher set-up. Workaday stiffs being stalked and killed in an office building after hours is just what the doctor ordered after the endless summer camps and high school proms of the 1980s slasher film. And truthfully, when PSYCHO COP RETURNS is trying to be a slasher film, it works rather well. It’s nasty, bloody, mean spirited and altogether irreverent.

PSYCHO COP RETURNS is a horror-comedy, but not in the vein of something like SEVERANCE or FRIGHT NIGHT. No, think lower brow. Think broader. Think THE NAIL GUN MASSACRE. Yep, it’s that kind of film.

Psycho Cop is basically Robert Z’Dar with his chin filed down to normal human proportions. He’s chubby, hyperbolic and altogether not very threatening. He’s also a pun machine, the worst kind of humor imaginable. After ramming a pencil into the night watchman’s eye, Psycho Cop tells him to stay put and “keep an eye on things”. Once that line wafted through the air like the stench of a wet fart on a hot summer’s day, I knew I was going to hate this every moment I spent with this character.

Some of the humor actually works though. I liked when the characters finally realize their friends are being murdered. Brian, the only character with an inkling that something terrible is going on around them, reacts with a mixture of excitement and horror, screaming “I knew I was right! I’m NEVER right!”. I liked the fact that people were flirting via fax machine. And then there’s the unintentional (I think) screw ups, like a shot of characters in an elevator that’s ascending followed by a shot of an elevator that is clearly descending. I even like the clever gratuitousness the film sometimes displays, especially the scenes of call girls dancing naked while a stag film plays in the background, a nifty way to increase the amount of breasts on display without having to hire more actresses to strut in front of the camera.

And like I said, some of the horror stuff actually works rather well here. So it’s a shame that our villain is given so many horrible one liners before and after each and every murder scene. I really do have to wonder what the hell they were thinking when they wrote this character’s dialogue. Because no one is going to find this shit funny. When Psycho Cop throws a woman off the roof of the building, her body lands in a dumpster. Cue the “act like trash, get treated like trash” punchline. That’s not funny. That’s not even clever. I shouldn’t be groaning every time the killer opens his mouth, especially after watching him pull off a double impalement or throw a man down an elevator shaft.

PSYCHO COP RETURNS is a decent horror movie wrapped in an abysmal comedy, but I think that’s exactly what Rifkin and Co. were trying to make. The obviousness of the humor, the way every punchline is so deliberately on the nose… That’s not an accident. No one confuses that sort of thing for good comedy. So how does one properly evaluate a movie that’s actually meant to be, well, kinda bad? Make no mistake, the comedy side of this film is really, really awful. So does that actually mean it’s pretty great? Do I need to praise the film for achieving its goal of being a bad comedy? Is PSYCHO COP RETURNS actually one of the greatest films ever made?

The world may never know.