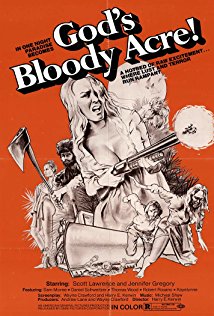 Harry Kerwin’s 1975 exercise in moonshine-tinged weirdness GOD’S BLOODY ACRE is some kind of film. I do mean some kind of film. Is it hicksploitation? At first glance, it certainly fits the bill, with its trio of redneck vagabonds clashing against ever-encroaching capitalist city folk out to turn their beloved woods into luxury camping grounds. Is it horror? It certainly turns into horror as the film goes along. Is it a drama all about disillusionment and unfulfilled emotional needs? Is it a comedy? Is it an art film? Truth is, it’s a little bit of all of that.

It begins with an unconvincing “this story is based on true events” placard before introducing, in descending order of mental acuity, Monroe, Ezra, and Benny, three good ol’ boys living in the forests of Florida. They watch as a group of construction workers level trees and destroy foliage in preparation for the building of camp grounds. When most of the group head off on break, Monroe and Sons attack a lone bulldozer operator, pelting him with stones before bifurcating the poor guy with his own bulldozer. That would appear to be the end of that.

We meet Richard and his wife Carol as they drive down a lonely stretch of road. They pass three black men and their car. Richard takes the opportunity to remark about how unlikely it is that three INSERT RACIAL EPITHET HERE came into possession of a Rolls Royce through hard work and proper finance. Carol, being more socially conscious (and less of an asshole) than her husband, wastes no time in chastising Richard for his less than politically correct observations. Their relationship on the rocks, the couple is on a long trip to God Knows Where in hopes that time away from the kids will help mend their marriage.

Next, we meet David, a straight laced dude on a motorcycle that's about to break down on the side of the road. As David wanders off looking for a garage, we’re treated to a flashback. David is standing in the office, everything is off-kilter with slightly askew handheld camera work and Echoplexed sound. It’s a stylistic choice that borders on self-important avant-garde wankery. Unable to muster another day working for a company which, in David’s words, creates “weapons of war”, David packs his bags, bids adieu to his lovely girlfriend, and hits the road.

We’re not done with the distractions yet, folks. We still need to meet Leslie, a free love kinda gal whose boyfriend isn’t having it when Leslie says no to sex. He smacks her around and threatens to rape her. The next time we meet Leslie, she’ll be sitting in a small town restaurant, again being threatened with rape by a group of hyper-masculine men. The guy running the place throws the men out, but wastes no time in criticizing Leslie’s apparent dislike for bras.

These disparate lines of story coalesce when all the characters converge on the unfinished camp grounds. Richard and Carol discuss their relationship issues, only to be interrupted by the arrival of David and Leslie. David has been robbed and beaten by the black men we saw earlier and Leslie has been caring for his wounds (and having impromptu sex with him in a nearby lake). In an odd act of kindness, Richard invites the couple to have dinner with him, much to Carol’s chagrin (“that’s the trouble with this country, we don’t help each other anymore”, says the racist Richard to his otherwise compassionate wife). But dinner will never come. After horsing around for damn near 60 minutes of this 86 minute movie, Monroe and Sons decide to get down to some unfortunate, bloody business.

It’s an odd and circuitous route for GOD’S BLOODY ACRE to take. From the 60 minute mark on, it’s an all-out bloodbath with our city folk heroes coming to blows with our redneck antagonists. Ezra, the lecherous virgin of the three, assaults Carol. Richard winds up with his neck in a noose. David and Leslie do their best to hide from Benny and his brother only to be dragged into a brutal battle royale. There is a bit of Peckinpah’s STRAW DOGS here. Carol’s sexual assault begins as a rape, turns into a consensual bit of lovemaking, before turning back into a rape. David, whom the film views as effeminate, reclaims his masculinity through bloodshed (I mean, this cannot possibly be a coincidence, right?). It’s an effective and satisfying conclusion to an otherwise meandering film, at least on a visceral level.

If co-opting the gut punch finale of Peckinpah’s classic was really Kerwin’s goal, he largely succeeded. I just wish he paid more attention to the 70 or so minutes Peckinpah spent building up to that climax. GOD’S BLOODY ACRE doesn’t really have a solid through line, no real substantial subtext or underlying theme. Like STRAW DOGS, there is a strong current of territoriality at play here, with the three vagabonds defending what they view as their private territory, but that thread of subtextual richness gets tossed aside for gratuitous rape and wanton destruction. Also like STRAW DOGS, the issue of masculinity gets play time here, with the women all being victims of male chauvinism and the men all acting as pawns in some grand game of ‘my dick is bigger than yours’. The fact that both villain and hero end up as victims of female violence is wonderfully ironic, but it doesn’t really do much to address the issues dancing around the periphery of the film.

I can get what Kerwin was trying to say, but the need to turn in a feature length film meant the director had to up the running time. As a result, we spend far more time watching characters travel than we do seeing them usurp the so-called natural order of the vagabonds. We spend more time talking around the issues the film brings up than we do actually talking about them. So when the credits roll on GOD’S BLOODY ACRE, we’re left with a movie that was meant to be about something, but never got around to actually being about something.

Still, I don’t think the movie is a waste of time, just a waste of opportunity. I liked the louder than loud performances and I found the oddly shifting tone of the film quite interesting at times. The ending is a knock-out, filled with fights that don’t look choreographed (I wouldn’t be surprised to learn that someone broke a rib or two during filming). It’s semi-charming, oftentimes brutal stuff, a nice schizophrenic mix of hicksploitation, backwoods horror and 1970s hippie melodrama. A weird, unstable mix, to be sure, but one with a certain charm and charisma to it.
Posted by David Grant at 10:11:00 PM
Email ThisBlogThis!Share to TwitterShare to FacebookShare to Pinterest
Labels: 1975, drama, God's Bloody Acre, Harry Kerwin, Hicksploitation, Horror