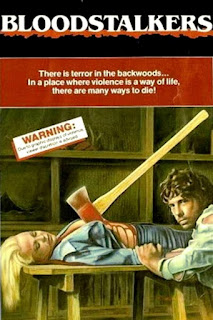 Last month, I reviewed Harry Kerwin’s 1975 shocker GOD’S BLOODY ACRE, a movie all about three hillbilly rednecks attacking a quartet of damn Yankees squatting in their little area of the Florida wilderness. It’s a small premise stretched out to feature length, with the entire first half of the film devoted to people driving, arguing and walking down the sides of lonely roads. This narrative tedium is flavored with bizarre detours into avant-garde aesthetics and strange stream of consciousness diversions. But just as the film is starting to wear out its welcome, it explodes into a barrage of brutal violence, delivering a final 20 minutes that completely makes up for the long, anemic wait.

BLOOD STALKERS, the 1976 feature film debut from professional Bigfoot tracker (!) Robert Morgan, is cut from the same cloth. Here, we have a trio of backwoods types (one of whom inexplicably has a British accent) terrorizing a gaggle of vacationers who are spending the weekend in an isolated cabin just outside the Everglades. Like Kerwin’s film, most of the running time is devoted to character stuff - relationship issues, talk of financial woes, even old war stories. The film doesn’t really come to life until the halfway mark when our group is attacked by something rather large and hairy, triggering a downward spiral into graphic bloodshed and revenge.

The man in charge of the weekend festivities is Mike, a Vietnam vet who was once admitted to a mental hospital after his wartime activities resulted in the deaths of multiple civilians. His wife, Kim, is instantly put off by the backwoods town they will be spending time in, endlessly (and I do mean endlessly) pleading with Mike to turn the car around. Along for the ride is Danny, a businessman whose fortunes are on the downturn, and his age inappropriate, ex-stripper wife, Jeri. The group stops off at a small gas station in hopes of getting directions to Mike’s old family cabin. The gas station attendant, a mean old man covered in muck, tells them to get the hell out and never come back. “This is blood stalker country”, he tells them, just before our trio of gun toting, bandanna wearing goons make their first appearance.

Despite the locals (all 30 or so of them) all giving them the cold shoulder, Mike travels on, eventually reaching the cabin. They have dinner, make out, go skinny dipping, tell spook stories about Native American mythological monsters… the usual stuff. But when Mike goes to get something from the car, he notices large animal tracks on the hood. A little later, Mike and Kim hear a loud animal call, like a panther. After they settle down for the night, a large, hairy arm bursts through the wall, grabbing Jeri by the neck. Clearly under assault from something, Mike decides to go get help, only to have everyone, including a minister, turn him down. Meanwhile, back at the cabin, our helpless trio falls prey to whatever it is that lurks in the nearby woods.

It’s almost pointless to discuss the first hour of BLOOD STALKERS as nothing much really happens. There are some interesting juxtapositions and moments of not-so-subtle, ironic humor. Beautiful nature shots of clouds and fields are inter-cut with images of poisonous snakes. An intimate, tear filled discussion between Danny and Jeri occurs. He breaks down in tears over his business woes. She offers to start dancing in strip clubs again to help pay the bills. Danny doesn’t want his wife to do that, to be a sex object for lusty, dirty men. We immediately cut from this raw, emotional discussion to Kim swimming naked in a nearby lake, the camera soaking up the sight of Toni Crabtree’s bare breasts. That’s about the level of intellect this movie operates on during this first half.

The majority of this time is spent rehashing the same moments over and over. Kim says they should turn around. Mike tells her to shut her trap. Danny makes bad jokes. They stop to get directions only to be shot down (the only person to help them is a mentally challenged man who communicates through hand gestures and vocal tics, the “funny retard” character that unfortunately often pops up in all these films). Even when they reach the cabin, we spend most of our time watching characters mill about than actually do anything worth watching. It’s tedious time wasting, just padding to get the film up to feature length.

But once that hairy arm comes bursting through the wall of the cabin, BLOOD STALKERS undergoes a strange metamorphosis. The direction becomes noticeably more experimental, with multiple close ups giving way to slow motion action shots and off-kilter camera angles. The lighting becomes less naturalistic and more artificial. As he searches for help, Mike inexplicably comes across a church group having choir practice, the melodic singing underscoring Mike’s desperate pleas for help and his frantic return to the cabin. It’s like we slipped out of the workaday, low budget B horror film into the land of bizarre Southern Gothic. It’s a major tonal shift and a complete reversal of the visual style of the proceeding 60 minutes.

It probably won’t surprise you to learn that the monsters terrorizing our protagonists are not monsters at all, just the trio of rednecks decked out in cheap Bigfoot costumes. But even this reveal (and the slaughter that proceeds it) is handled in a fashion not usually found in movies like this. Mike’s return to the cabin triggers the most shocking scene the film has to offer, a real gut punch of a moment that actually rendered me momentarily speechless (and made me remember just how stunning the final act of Sergio Martino’s TORSO was the first time I saw it). It’s a brave move for Morgan to make and the concluding action of the film doubles down on the nasty bloodshed that triggered it.

Make no mistake, the final 20 minutes of BLOOD STALKERS is damn good stuff. Like GOD’s BLOODY ACRE, the biggest complaint I have about the film is that it takes so damn long to get there. Half of the audience will check out well before it reaches the end of the second act. It would have helped if Morgan gave us characters with whole personalities instead of just flashes of internal conflict. Danny is worried about money. Jeri is torn between wanting to support her husband and not wanting to go back to stripping. Mike suffered emotional trauma in Vietnam. Kim… well, she just won’t stop whining. None of these character moments matter at all. They’re just brought up, explored for a few minutes, and then dropped. As a result, the characters (despite being well acted by an energetic cast) feel cardboard and flimsy, and the time spent with them doesn’t add up to much.

But once the film starts picking up speed and the main threat is revealed, BLOOD STALKERS becomes a rather excellent little horror movie. It’s difficult to stay angry about the slow, plodding first half of the film when it ends in such glorious fashion. After all, it isn’t how you start the game, it’s how you finish it that matters. BLOOD STALKERS might stumble out of the gate, but in its final act, it puts on one helluva good show.