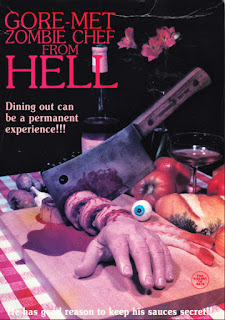 What should be a mercifully short 67 minutes feels like an eternity. Don Swan’s 1986 Super 8 atrocity GOREMET, ZOMBIE CHEF FROM HELL begins in a field in the year 1386. Three men clad in black robes, members of the Righteous Brotherhood, expel one of their own, Goza, for high treason. As punishment, Goza is condemned to eternal life, an auspicious ‘curse’ which carries an unfortunate caveat. In order to avoid rotting, Goza must consume human flesh.

It was at this point, less than 10 minutes into the film, that I knew I was going to hate every single minute I spent sitting in front of my television. This is roughly the same set-up as the one found in DON’T GO NEAR THE PARK, a movie I hate so much it hurts. I will say that GOREMET, ZOMBIE CHEF FROM HELL is nowhere near as awful as Larry Foldes’ 1979 abortion, but that’s really not saying much. That’s like saying radiation sickness isn’t as awful as prostate cancer.

We move 600 years into the future. Goza is now running a crappy little restaurant with his henchman, Blozor. I would like to give you some kind of plot synopsis, but this movie simply does not have a plot to synopsize. It’s a tired parade of character introduction, character death, character introduction, character death repeated ad nauseam until the final 10 minutes. At that point, the men who expelled Goza 600 years ago reemerge to bring an end to his reign of terror. Even if there was a plot to be found here, I doubt it would be comprehensible.

I’m not going to slag off the film for looking like shit (it was shot on Super 8, after all), nor will I chastise Mr. Swan for not equalizing his sound mix (good luck hearing 25% of the dialogue over the awful slap bass synth puke this movie calls a score). Instead, I’ll take it to task for committing the gravest sin a movie called GOREMET, ZOMBIE CHEF FROM HELL could ever commit.

The VHS box art is glorious, promising some semblance of splatter and gore. Apart from a few dime store severed limb props, there’s very little in the way of splatter to be found here. In the only somewhat competent murder set piece the film has to offer, a man’s head is punched off and his spurting blood is sipped like water at a park fountain. It’s the only on-screen death they bothered to film. I will include for your viewing enjoyment three stills from the film. Here, have a look… 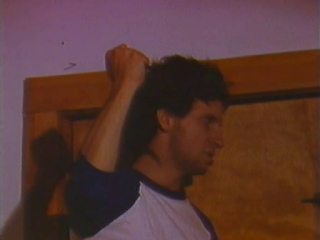 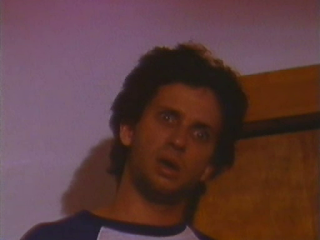 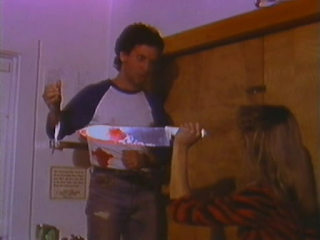 See that? That is an actual murder scene in the film. The man in the pictures is Larry, some doofus desperate to find his finance after she went missing in the restaurant. What you’re seeing is the actual death scene. There is no action missing. It’s done in three individual cuts. We never see the girl stab Larry. We never see the knife extend towards him. This is EXACTLY how the death is presented in the film and when I can recreate with 100% accuracy the action of a moving picture in still shots, something is horribly, terribly fucked up.

I should point out that GOREMET, ZOMBIE CHEF FROM HELL is a horror comedy and not a straightforward chiller. This does not let it off the hook for being incompetent. When we first meet Larry, he’s sitting next to Sherry, his soon-to-be finance. She looks like this... 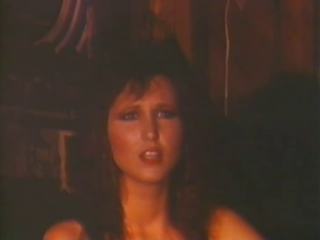 Larry attempts to slide a ring on her finger, but the ring is too small. He can’t get it past her knuckle, despite trying very, very hard. And yes, this is how she wears the ring for the rest of her scenes, with it sitting just below her knuckle. Now, the problem is… I can’t tell if that was intentional or not. Was that meant to be a joke? Was the fact that Larry refers to Sherry as “a blonde” a joke? She’s clearly a brunette so why is he referring to her as a blonde? Was it because Don Swan couldn’t find a blonde actress and never bothered to correct the script to reflect the casting? Was it an attempt at humor? I honestly cannot tell because the movie is so inept and stupid that it slips into Poe’s Law territory. I have no idea how to suss out what is intentionally stupid and what is unintentionally stupid.

Like, was I supposed to be on the edge of my seat as Goza and one of the priests from the Righteous Brotherhood have a Force battle in the park (and yes, they do throw each other around simply by extending their hands, a la STAR WARS)? There are actual stakes in those scenes, unlike the rest of the film. It’s the big fight between good and evil. So was I supposed to care or laugh?

I mean, I didn’t care OR laugh, but you get my point, right?

Another problem is just how padded out this 67 minute film is. Songs are played in their entirety, including one impromptu blues performance in the restaurant. There is a 32 second long shot of two women sitting at a booth during which not a single line of dialogue is spoken. There is an over two minute long scene of Goza making a mixed drink. And what’s worse, because there is no such thing as character development in this film and all the deaths are bloodless, off-screen affairs, each new victim does nothing but prolong the pain. I should be excited when new characters come wandering into the restaurant. I should be giddy at the thought of watching them being butchered. But I don’t get to see that. So every time a new character was introduced, I groaned. It was never going to end. This fucking movie was Never. Going. To. End.

I hated GOREMET, ZOMBIE CHEF FROM HELL every minute it was on my screen. Even when the mystical goddess of the magical brotherhood of Force wielding monks super glued Goza’s lips shut so he would painfully starve to death, I didn’t grin. I didn’t once chuckle or giggle like an idiot. I just wanted it to be over with. I couldn’t wait for it to end. It’s a great, big black hole of a film, just a fun vacuum that sucks up an hour of your life. I would tell you to avoid it, but we both know that you won’t. You’ll want to see it for yourself because… well, it’s called GOREMET, ZOMBIE CHEF FROM HELL. It’s a great title, fantastic even. It’s also the one and only thing good about this whole rotting, stinking affair.