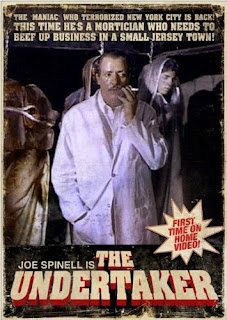 Calling THE UNDERTAKER an oddity is a bit of an understatement. All but abandoned when the production ran out of money and lead actor Joe Spinell kicked the bucket, this low rent slasher film (with no fewer than four directors, here credited under the collective pseudonym Franco Steffanino) first hit DVD a few years back, only to be later reissued on Blu-ray by the venerable cult maniacs at Vinegar Syndrome. The Code Red DVD was my first experience with the film and I was dumbfounded by how much footage from other B-movies was incorporated into the proceedings to fill dead air (in particular, footage from Wallace Fox’s 1942 schlocker THE CORPSE VANISHES appears again and again). Watching the Vinegar Syndrome release was like watching an entirely different movie, albeit one with abrupt and sudden shifts to VHS quality inserts, a compromise needed to present THE UNDERTAKER in a somewhat complete form.

The movie issued on Code Red DVD barely made any sense. It was haphazardly constructed, sliding into absurdity at the drop of a hat. Whole scenes appeared to have been out of place or improperly positioned in the edit. Watching the Vinegar Syndrome release definitely helped smooth over the rougher edges, but those lapses of logic and strange tonal shifts persisted. This was of course because the film had never been finished and while all of the major set pieces seemed to be in place, it was clear that the interstitial stuff – the transitions, establishing shots, inserts of people entering or leaving rooms – was simply never filmed or was lost to time.

As such, we have a movie where our lead villain, the necrophiliac undertaker Roscoe, has a brief dialogue exchange with a comely co-ed in broad daylight. A single cut later and he is standing outside of a woman’s house in the middle of the night. As Roscoe spies on the shapely lass cooking a hamburger in a frying pan, we cut again. We’re now standing inside the kitchen and Roscoe has mysteriously teleported inside with us. There are dozens and dozens of these moments in the film, noticeable gaffs in which characters seemingly teleport around locations or magically summon implements of bodily destruction from the ether.

The real question to ask is does any of this detract from the experience of watching a movie as goddamn bizarre as this? More on that in a moment. For right now, it’s best to summarize what passes for a plot.

Roscoe runs the local morgue. He’s also a necrophiliac serial killer responsible for a sizable amount of disappearances over the past few months. Roscoe has a nephew named Nick and recently, Nick has become suspicious of his uncle’s behavior. In a strange twist of movie fate, his anthropology professor, Pam Hayes, is currently teaching her class all about cultural traditions of necrophilia. Instead of going to the police, Nick partners up with his teacher to investigate Roscoe’s after hours activities. When Roscoe catches Nick snooping around, he quickly dispatches his nephew and sets his sights on Pam.

While all of this is going on, Roscoe attends horror movie showings, the local cops poke around crime scenes and discuss how there was “traces of semen on the intestinal tissue” of a victim (their words, not mine), a security guard with delusions of grandeur goes about solving the case himself, and an old man out for a jog pratfalls into a puddle of bloody muck.

So yeah, this movie is kind of a mess. Spinell’s performance is all over the place, giving us half-maniacal serial killer and half… well, plain old MANIAC. Sometimes, he likes to babble to the corpses he has hanging from meat hooks in the basement. In these moments, he’s essentially portraying Frank Zito in a lab coat. At other times, he’s playing something akin to a mad scientist, often talking about his laboratory as if he’s engaging in science of the ‘gone amok’ variety. It’s not difficult to guess on which shooting days Spinell showed up drunk. His performance, always the strongest suit of any horror film he appeared in, is so erratic and undisciplined here that you might think this film had four goddamn directors all of whom seemed to want to make a different film.

And that’s exactly what appears to be the case here. The film vacillates wildly between softcore porn (virtually every actress is unclothed at some point), graphic gore film, police procedural and run of the mill killer thriller. You can kind of see individual threads begin to appear. Roscoe states that the damn Surgeon General and popular diet fads are eating into his business. Maybe this was going to be a black comedy at some point before it was deemed necessary to have Joe Spinell rape the corpse of a woman he just stabbed to death? Nick’s rather early departure seems like a nod to PSYCHO. The cops actually do cop stuff here, unlike your usual low budget horror film. When Roscoe takes in a nice Satanic horror film at the local theater, we’re not given any indication that the Satanic ritual we’re watching is not actually happening in the film, a little scene that leads me to believe that someone in the crew of directors had at least one meta bone in their body. What exactly was this movie supposed to be?

I have absolutely no clue, but what I can say is that watching THE UNDERTAKER unravel was far less painful than I expected. Because there is no single guiding vision behind it, the film feels positively schizophrenic. The missing bits of interstitial stuff gives it a slipshod grasp on reality. It’s sometimes even difficult to know when one day ends and another day begins in this film. It’s a stream of consciousness feel, an accidental bit of art house wankery that just adds to the overall strangeness of the proceedings.

The kills are bloody and mean, the acting is just the right shade of excruciating, and the abundant female flesh caked the whole thing in lovely, lovely grime. It’s an ugly film and a borderline mad experiment, one that would have probably been ruined had filming reached completion. Because the absurdity of it, the ‘work in progress’ feel, is what make this otherwise mundane “been there, done that” two cent shocker into a genuine curiosity.

*** You can grab a copy of THE UNDERTAKER from Vinegar Syndrome HERE.
I was not provided a copy for review. I bought it with my own damn money, but Vinegar Syndrome deserves support and links help with search results. So fuck it, there's a link. ***