A NIGHT TO DISMEMBER 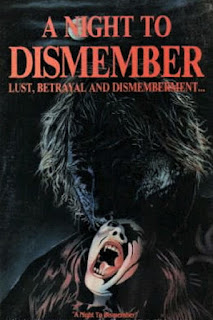 The second VCR my family ever owned was a gloriously large, ridiculously heavy Zenith machine that we bought from K-Mart for a couple hundred bucks. It was a definite step up from our first videocassette recorder, with true composite cable output and a remote control that actually worked from more than five feet away. It also had a feature I didn’t know even existed at the time. While it would still only rewind at standard speed during playback, this Zenith VCR could fast forward at variable speeds. Press the button once and it would move through the film at 2x speed. Press it a second time and it would run noticeably faster. Pressing the button again would kick the machine into overdrive (relatively speaking), zipping the movie along at a whopping 6x speed. A truly remarkable feature for those of us desperately seeking out whatever nudity a film contained while our parents were busy at the grocery store.

When DVD came along, I was blown away by the picture quality, the sound clarity, the special features, all that jazz. But for some reason, I found myself genuinely disappointed by – of all goddamn things – the fast forward and rewind features. Seems like a fairly stupid nitpick, doesn’t it? Well, it is, but I have to admit that back in the day it absolutely annoyed me that kicking the fast forward into high gear didn’t result in a smooth image. I expected something like an old chase scene from a silent movie. What I got was more or less a slide show, with the film seeming to leap forward every ten or fifteen seconds. I’m sure you all know what I’m talking about, right?

I want you to hold that thought for a moment while I give a very brief (and possibly fabricated) history of Doris Wishman’s 1983 film A NIGHT TO DISMEMBER.

This low rent slasher flick was intended to be Wishman’s first full blooded foray into the horror genre, a real change of pace from the kind of nudie-cutie and roughie flicks Wishman had spent the last two decades creating. Filmed almost entirely in 1977, Wishman’s film plays a bit more like PIECES than HALLOWEEN, a grim and nasty B-movie filled with more than a few gialloesque moments. It might have been yet another success for Wishman had the film been released as intended, but as fate would have it, the world would never set eyes on a fully completed A NIGHT TO DISMEMBER.

According to legend, nearly 40% of the film negatives were destroyed by a disgruntled lab technician and Wishman, contractually obligated to deliver a feature length film, had to spend the next year or two shooting all new scenes in a desperate attempt to piece together what was left of her film. Whether this story is true or not, I have no idea, but it is very, very easy to tell that A NIGHT TO DISMEMBER is far from complete.

And this brings us back to my petty annoyance with the fast forward feature on my DVD player. Because watching A NIGHT TO DISMEMBER is a lot like watching a movie with the fast forward cranked up to 16x speed. The first few minutes of the film are a disjointed mess, an attempt at back story cobbled together not from whole scenes, but from scene fragments. In order to make this intelligible, Wishman employs voice over narration from a police detective named Tim O’Malley. He tells us all about the Kent family and the horrible fates that befell them in the far future of 1986.

It’s a relatively straight forward bit of exposition covering two generations of the Kent family. In the first, young Susan kills her younger sister, Bonnie, with a hatchet before accidentally falling on the blade herself. In the second, a husband returns home from a business trip to find his beautiful wife dead in a pool of blood. It is later discovered that the husband had hired someone to kill his wife. After his arrest, the man hangs himself in his prison cell. That sounds straight forward, right? Not difficult to follow at all, just a clear cut way of showing that the Kent family tree sure can produce some nuts.

Except watching it play out on screen is a different story. We begin with a zoom-in on an upstairs window of a home, then cut to an old man playing cards. We cut to Bonnie stripping in the bathroom then to a doorknob turning. Bonnie steps into the bath, a hatchet is shown in shadowy silhouette, another window is zoomed in on, then Susan hacks her sister to pieces. Once the bloody work is done, we are treated to a shot of a dead (though still blinking) Susan lying motionless on the floor. We then immediately cut to the second of the two stories without any indication of changing location. A man returns home. He looks around the empty room. We then cut to Detective O’Malley speaking to the man on the phone. This leads to an outdoors shot of a busty, barely clothed woman walking through the woods. When we cut back to the home, the man wanders into another room. We see a brief shot of someone, presumably his wife, lying nude in a blood filled bathtub. The next series of shots involve a black gloved hand turning a doorknob, the wife sitting in her bedroom, a silhouetted murder, another too brief shot of a body being dragged into yet another room, and a silhouette of someone dangling from a noose.

It is obvious that this entire set-up ran much longer in the first cut of the film (if it was included at all; I’ve had difficulty finding out what was originally shot back in 1977 and what was later added to bolster the running time), but here, it plays as a series of disconnected, disjointed shots. Were it not for the voice over narration, none of it would make any sense. This is a problem the film never manages to overcome.

The next scene takes place five years in the past, a plot detail that only serves to further the confusion. Two teen boys are chased into a basement and savagely killed. We learn the culprit is yet another Kent, a young(ish) woman named Vicki. We then move ahead five years to the present day. Despite brutally murdering those two boys, Vicki is released into her parent’s custody after her shrink declares her “cured” of her insanity. This rubs her siblings, Billy and Mary (both of whom are still living at home in their early 30s), the wrong way. Billy is fearful that Vicki might once again go insane. Mary, clearly the petty one in the family, simply doesn’t want Vicki stealing all the attention. Even though both siblings are well aware that Vicki’s brief stint of madness resulted in violent murders, they set about driving their sister crazy. All the while, someone is messily bumping off extended Kent family members.

Had the film been properly completed, all of this would make for a rather enjoyable, exploitative romp. Unfortunately, because it’s such a goddamn mess, Wishman needs to utilize more and more explicit voice over narration as the film goes along. As a result, we don’t even get to entertain the idea that Vicki might be losing her mind once again. We’re flat out told that everything that is happening is being caused by Billy and Mary, even the murders. Hilariously, once Detective O’Malley starts his investigation, the film has O’Malley narrating his own investigation in the third person. This absolutely drove me bonkers as the film went on as I could see the potential in the material. At one point, this was a movie I would have genuinely enjoyed watching.

The murder scenes lay somewhere between Herschell Gordon Lewis and Juan Piquer Simon, unconvincing but appropriately gooey and gross. A head is run over by a car, a knife is repeatedly stabbed into flesh in gruesome close-up, hatchets are slammed into skulls, fingers are cut off, nails are rammed through throats… It’s gloriously nasty and utterly mean spirited. The nudity is plentiful, the acting is dreadful, the excursions into strange 1970s editing are wonderful, the use of superimposition and classic spook show lightning effects are fantastic… It’s all there.

Except that it isn’t. Not really. It’s a bag of flesh with no skeleton to keep it upright. The film had to be re-dubbed years later by a voice cast of about three people. Sound effects are all done with voices, the stabbing sounds accomplished by having someone go “squish squish” close to the microphone. A dog barking is actually just someone going “arf arf arf” in as highly pitched a voice as they could muster. The score is comprised of inappropriate library tracks. Vicki’s awkward return home is scored with light elevator rock music while her tender reunion with an old boyfriend is scored with booming, Gothic horror music. I’m fairly certain that Wishman used porn loops for the sounds of moaning that accompany all of the murder set pieces, as the actors all sound like they’re getting their rocks off from having their limbs removed. Many of the close-ups in the film are clearly made from B-roll material, as the actor’s close shot reactions rarely suit the context of the scene. With almost a half hour to go in the film, the voice over narration simply stops, rendering much of the final reel unintelligible.

I won’t say, as many other have, that A NIGHT TO DISMEMBER is one of the worst films ever made. It’s still somewhat enjoyable to watch (and at 69 minutes, it won’t waste much of your time) even if it rarely makes much sense. It would be rather easy for me to dismiss any and all criticism of the film by stating “well, it was never finished so...”, but that wouldn’t be an honest bit of argumentation. This particular version of A NIGHT TO DISMEMBER might not have been the intended version, but the fact remains that this is what was released to the public. This IS the film unfortunately and it’s a mess. A complete and total mess.

But damn it, there’s a good film here, or at least an entertaining film. You can see it among all the confusion and cacophony. I stand by that. This could have been another PIECES, but as it stands, it’s just… wait for it… pieces, held together with tape, gutted and hallowed out. A shell of what it could have been.

Posted by David Grant at 12:07:00 AM
Email ThisBlogThis!Share to TwitterShare to FacebookShare to Pinterest
Labels: 1977, 1983, A Night to Dismember, Doris Wishman, Horror, Samantha Fox, Slasher film