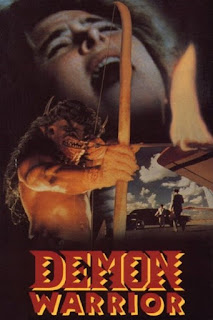 Through a clumsy exposition scene we learn that the old Willard property used to belong to some Native Americans. Old man Willard stole the property from it’s rightful owners and the Native Americans, none too happy about that fact, placed a curse on the land. Every ten years, for an unspecified amount of time, an ancient muscle-bound man in a monster mask materializes in the woods, hunting and killing any white man or woman he comes across.

A gaggle of college aged whities are about to have a really bad weekend as their hunting trip turns into an implied bloodbath, 90% of which happens during the daytime hours. Will Neal, the youngest member of the Willard family to ever return to the old family lands, be able to stop the marauding Demon Warrior before he can kill his lovely girlfriend, Sarah, and his friends Brent, Hassmiller and… sigh… a guy named Badger? Neal might be in luck, as an investment banker turned Indian shaman has arrived on the scene with a magic arrowhead, ready to do battle with the buff guy in the monster mask.

So yeah, Frank Patterson’s 1988 low budget slasher movie DEMON WARRIOR is yet another Native American themed horror film, just another romp about some well-to-do white people paying bloody reparations for the sins of their fathers. It seems this kind of film pops up from time to time. POLTERGEIST featured the typical Indian Burial Ground trope, a nicely done and lovingly cynical look at the underbelly of white suburban life. Tobe Hooper’s (or Steven Spielberg’s) film sits at the top of the list, a genuinely good large scale horror film. Much, MUCH further down the list you have tripe like Fred Olen Ray’s SCALPS and George McCowan’s SHADOW OF THE HAWK, and somewhere in the middle, there’s some fairly decent stuff, like William Girdler’s gonzo sci-fi/horror mash-up THE MANITOU and the Wendigo cycle of horror films from Larry Fessenden.

Where does DEMON WARRIOR fall on the list? Pretty low, to be honest. This is a film where virtually every detail of the script seemed to be dictated by the incredibly low budget. Although our cast of characters are all crashing at Neal’s family home, we spend very little time there, most likely because the production could only afford the location for a single day and the owners didn’t want their nice hardwood floors stained red with food coloring. As a result, the vast majority of the film takes place outdoors, but not in the woods or near any kind of eye catching scenery. Expect a lot of walking and running through wide open fields with characters simply crossing through the frame because no one could afford a Steadicam or any other kind of camera-stabilizing mount.

90% of the film happens during daytime hours, a good choice if you’re looking to save a few hundred bucks on lights and generators, but definitely not a good choice if you’re trying to create atmosphere or scares. The demon warrior is wisely kept off screen in these daytime scenes, only showing his poorly constructed face during the nighttime scenes that bookend the film. He’s a ridiculous creation, literally just an oiled up bodybuilder in a Halloween mask. He doesn’t even get a roar or a growl. He just shoots arrows and moves at a light jog so the actor in the oversized mask won’t trip on a log or a rock.

The only saving grace in DEMON WARRIOR is the cast of characters, many of whom actually have personalities, wants and needs, and emotions that go beyond the typical “must get laid” attitudes of 1980s slasher movie characters. There’s a bit of a love triangle between Neal, Sarah and Brent, her old boyfriend who still carries a flame for her. Patterson and his co-writers actually treat this element of the script with a lot of care. When Hassmiller calls Brent out for trying to hit on Neal’s girlfriend, Brent rightfully points out that Hassmiller is currently sleeping with, you guessed it, a woman in a relationship. This leads the two men to have a somewhat heartfelt ethical conversation about relationships and love and… I don’t know. It’s not poetry, but the fact that a film called DEMON WARRIOR has the audacity to stop in it’s tracks so two of it’s male characters can have a kind of heart-to-heart about their love pangs is, well, kinda neat.

Not that anything really comes of it, as Hassmiller’s love interest exits the narrative as quick as she enters it and Brent is shot with an arrow before he settles on a course of action, but it’s the thought that counts, right? I mean, no one in the cast is a world class actor and all the characterization is in service of a plot about a shirtless man in a Halloween mask chasing people through a field for 26 minutes, but I have to say that in a world full of obnoxious, can’t-wait-for-them-to-die slasher movie characters, the knuckleheads on display here are actually really likable.

Unfortunately, everything else about DEMON WARRIOR is not so likable. All of violence (minus a few arrows to the chest and a nice, juicy scalping) is off screen, the Final Girl never gets to be a proper Final Girl, and the whole film boils down to a long scene of Indian magic and unconvincing lightning optical effects. There just isn’t a lot of movie here. Most of it is running through fields and making sandwiches. There is however a rather ludicrous car accident and at least one memorable nightmare sequence. So it’s not totally useless, I guess. It’s just not very good.
Posted by David Grant at 11:39:00 PM
Email ThisBlogThis!Share to TwitterShare to FacebookShare to Pinterest
Labels: 1988, Demon Warrior, Frank Patterson, Horror, Native American monster, slasher, Slasher movie