HAVE A NICE WEEKEND 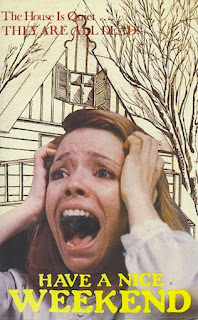 HAVE A NICE WEEKEND begins innocently enough with a melodic score playing over out-of-focus footage of two middle school football teams smacking the hell out of one another on an empty field. Just as I was getting invested in the downtrodden underdog Team in Blue Shorts, who would have won the game had idiot Davey not fumbled the ball (fuck you, Davey), the movie decides to forever dash my dreams of a middle school slasher film and focuses instead on Frank, the middle aged football coach, and his dwindling love life with his girlfriend. Wouldn’t you know it, just as I was getting invested in whether or not Frank would ever get his mojo back, the film decides to give me Chris, a Vietnam War vet fresh off the plane home. Chris calls his parents and informs them of his wishes to have a reunion at the old family vacation home conveniently located on an island in the middle of nowhere.  And I don’t need to tell you why that’s a bad idea. This is a horror movie from 1975 and anyone who has ever seen a mid-70s horror film knows better than to ever go some place secluded with a Vietnam War vet, especially one that is having flashbacks of dead children and suspiciously rushes off to shave in a train station bathroom before burning his uniform behind the building. That sort of thing never leads to having a nice weekend.

So off to the vacation home we go with Frank, Chris, Chris’s sister Muffy (yes, that’s her name) and Muffy’s college roommate, Ellen. Also on board for the weekend trip are Chris’s parents, Paul and Laura, and Joan and Donald Kraft, friends of the family. It becomes apparent rather quick that every one of these individuals has problems. Paul has a knife fetish, Laura is depressed by her ageing, Muffy recently attacked Ellen over some dude, Joan is flirtatious with the younger guys and her husband knows it. They’re only at the home for about 24 hours before Frank is viciously stabbed to death out in the woods.  Because this is a horror movie, the phone lines aren’t working so calling the police isn’t an option. Maybe they could build a fire big enough to see from the mainland? Maybe they should… whoa, never mind all of that. Chris freaks out and goes into full blown armchair general mode, dividing the island into separate areas for each individual to check. And that isn’t good because now Chris can bump them off one-by-one without anyone oh wait Chris is dead, his skull split with a garden hoe. Huh. Kind of unexpected.

You would think the discovery of two dead bodies would drive the rest of the group into hysterics but nope. No one seems all that bothered by it. They quickly sink into calm, rational detective mode, sitting around the house, quietly questioning each others' motives and alibis. We learn a bit more back story through flashbacks and rumors. Frank and Laura were having an affair. Paul was a strict, borderline abusive father and is now seeing a shrink. Muffy has a pretty strong attraction to her roommate. Ellen’s older brother is in an asylum. The film begins to pile up insinuations and incriminating angles, but does absolutely nothing with them for the next 20 minutes, choosing instead to just end with a sudden reveal of the killer. Worse, after the film ends proper, we get a near five minute long epilogue where a psychologist explains the murderer’s state of mind, a kind of halfhearted attempt to add some last minute intellectual depth.

But you know what the real twist in the story is?

It’s not an altogether bad film. In fact, it’s one of those films that have really grown on me over the years. It has this kind of strange atmosphere to it, a weird vibe where everything is skewed just enough to be bizarrely fascinating. This isn’t an empty headed thriller. It’s a strange statement about social confines within family units, about personal tragedies that go unnoticed, about a war abroad that paralleled social unrest back home. The killer in HAVE A NICE WEEKEND is an oddly tragic figure, a victim of circumstances beyond their control. The epilogue goes to great pains to explain all that and ends up coming across as more than a bit pedantic and almost condescending in tone, ruining what I feel is the films single best moment, the brief monologue given by the killer that spells out, stream of consciousness style, all the subtext lying behind the subterfuge of drab, by-the-book thriller surface images the film offers up. In those final moments, HAVE A NICE WEEKEND becomes something more than the previous 70 or so minutes combined.

There is also the beautiful autumnal scenery, the sweeping and slightly ironic score, the acting that feels like impressions rather than performances… all of this adds up to create a film that works on a strange sort of level. It’s an anti-thriller thriller, a movie that is just slightly arthouse and just marginally grindhouse, a weird fever dream where every passing moment ladles just a bit more absurdity into the mix. It isn’t high class entertainment, nor is it bottom of the barrel trash. HAVE A NICE WEEKEND is a genuine oddity with its own insular kind of charm, a proto-slasher that deserves a second chance at an audience.

Posted by David Grant at 12:23:00 AM
Email ThisBlogThis!Share to TwitterShare to FacebookShare to Pinterest
Labels: Have a Nice Weekend, slasher