TO ALL A GOODNIGHT 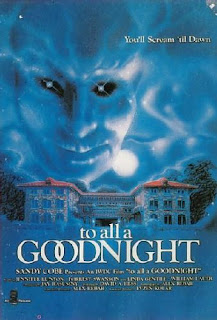 Within the first 30 seconds of David Hess’ directorial debut TO ALL A GOODNIGHT, some random girl takes a tumble off a balcony after being playfully chased by her schoolmates at the Calvin Finishing School for Girls. An indeterminate amount of time later, we meet our group of heroines, a half dozen ditzes planning on a hot night of debauchery with some hunky out-of-towners. They give the den mother a glass of warm milk and send her off to bed before settling down for a little skin-on-skin action with the boys. Once everyone has had an orgasm and the Final Girl has had her fifth or sixth run-in with a slow-witted, Bible-thumping, Messenger of Doom gardener named Ralph, the real action starts. A killer dressed as Santa Claus shows up and starts plowing through the cast. Could this have anything to do with the Prank Gone Awry from earlier in the film?

Do I really need to answer that question?

At the 45 minute mark, I began to notice a few things. One, I didn’t know a single character’s name. Two, the movie never really explained the central plot set-up, that these girls were staying behind on Christmas break. Three, that this film was even supposed to be set at Christmas time. The first bit of Christmas decoration doesn’t show up until about an hour in and the movie appears to be happening in the spring. Four, I still didn’t know who knew who, from where and for how long. I’m pretty sure one of the girls mentioned the lead guy by name before he arrived, but I might have just imagined that and I sure as fuck wasn’t going to start the movie over again to check. And five, why exactly did the guys arrive in a plane? Where exactly is this finishing school located?

That’s when I realized that it doesn’t matter. None of this mattered to me. I’ve seen so damn many of these movies that the details of the set up simply don’t interest me anymore. In fact, I would prefer to just skip all that junk and get straight to the bloodletting. Every minute the movie spends explaining the minutiae of the narrative just drags out my suffering.

And suffer I did. Even by early 1980s slasher film standards, this was pretty abysmal. While I would be lying if I said that the film doesn’t offer up some strikingly good gore effects from time to time, the build up to virtually every murder set piece is nonexistent. Characters just… well, die. There’s no real attempt to build suspense or even mild intrigue. I mean, this is ostensibly a murder mystery, right? So shouldn’t we, ya know, spend a little time trying to figure out the murderer’s identity? Shouldn’t we have a moment or two where the characters actively try to survive instead of just standing around while the killer sllooooowly approaches? What we have here is a film so damn lazy that it doesn’t even offer up a single red herring, content to just kill everything in sight as recompense for its own lack of imagination. Worse, the killer turns out to be someone everyone in the house knows. So why even bother dressing up in a creepy Santa Claus outfit? And why doesn’t anyone in the house know the relationship between the girl they accidentally killed and her… you know what? I’m not even spoiling it. It’s the only thing this movie has going for it. Admittedly, that’s not saying much.

Now yes, I know I just said that I don’t care about the details, but there’s a difference between the set-up and the pay off. The set-up for these films literally doesn’t matter. Just take an isolated location, toss in some eye candy, chuck in a hulking dude with a sharp object and let him go to town. But there needs to be something to sustain the blood and guts parade, some reason to keep watching, otherwise the stretches of film between the murders become unbearably boring. There just isn’t anything going on in this film. It is an empty experience in every way.
Posted by David Grant at 12:42:00 AM
Email ThisBlogThis!Share to TwitterShare to FacebookShare to Pinterest
Labels: Bah humbug, slasher, To All a Goodnight