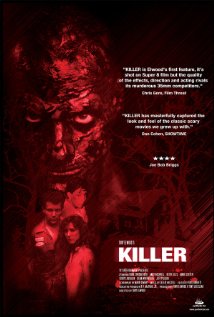 It’s entirely through presentation that these films work. Both Jonker and McNaughton turned their entirely workaday stories into something special through, respectively, rapid fire pacing and gooey effects, and cynical, almost clinical attention to gruesome detail. KILLER, the debut feature from Tony Elwood, substitutes slapdash, borderline cartoonish violence for a serious tone, turning his otherwise ordinary tale of a spree killing nutjob, warped by childhood trauma, terrorizing a small group of 20somethings into a giddy, wildly entertaining geekshow. In terms of substance, this film has none. In terms of minute-by-minute gleeful excursions into absurd blood pornography, this film has aplenty.

It also has a great sense of genre awareness to it. Every stab or gunshot is accompanied by a sound effect three times louder than everything else on the soundtrack (a soundtrack which constantly throbs away in the background and ironically seems to rise to unheard of levels of creepiness during the more mundane scenes). Every wound, no matter how slight, sends a gluttonous, impossibly large spray of blood across the scenery. You have a killer who was driven to madness by finding his mom servicing a cop. This unnamed killer wears sunglasses, devouring each scene with buffoonish relish, like Arnold Friend reimagined as a Looney Tunes character, constantly undone by his inability to control his bloodlust, leading him to be caught several times in the act of murder because he’s soooo insane that he simply cannot resist killing people outdoors in broad daylight. The killer claims he cannot die, a claim the movie backs up several times even though it makes no logical sense. It’s just how things are in these kinds of movies. The hero is a largely ineffective git named Ash who just so happens to get his ass throttled over and over again as the movie barrels towards its climax.

To watch KILLER is to watch the low budget horror film in a constant state of equal revelry and semi-contempt. It encapsulates pretty much every quality you and I love about low budget slasher films, from the cheap and convenient plots to the overabundant gore. But when the credits roll, the undeniable feeling sets in that while you had a decent amount of fun, you’re still hungry, because what you just watched was as insubstantial as a handful of marshmallows. But to complain about a lack of any meaningful substance in a movie like KILLER is to miss the point of a movie like KILLER. Sometimes it’s nice to just shove some candy down your throat and enjoy the teeth-melting sweetness, even if you know those empty calories aren’t going to do much to keep you alive. I enjoyed this movie for all the right reasons, even if my brain bitched and moaned once it was all said and done.
Posted by David Grant at 1:58:00 PM
Email ThisBlogThis!Share to TwitterShare to FacebookShare to Pinterest
Labels: Killer, Killer!, slasher, Tony Elwood