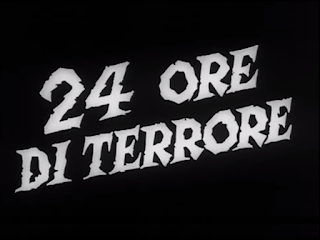 Unlike DARK PURPOSE, 24 HOURS OF TERROR is shot in glorious black and white. The film begins with the arrival of a man named Hughes in France. Who this man is is unknown to us. At this stage of the game, all we really know is the company he keeps, as we witness his driver shoot an armed thug to death in the airport bathroom. As Hughes and his driver make their way to a hotel meeting room, they discuss the plan. They aim to intercept a man named Tronche, a gun for hire on his way to do a job for a drug dealer named Jean. Hughes manages to subdue Tronche, knocking him out. He changes into Tronche's clothing and leaves the hotel, meeting another thug waiting for him in a car at the side of the road. Hughes gets in and the two men drive off.

Is Hughes a member of a rival drug gang? Is he an undercover cop? The answer is left until the very end, and that is massively unfortunate as that piece of the narrative is by far the strongest and most interesting story the film has to offer. The minute by minute narrative here is largely uninspired, carried out in fits and starts with only a few eye-catching set pieces to break the monotony.

The bulk of the story deals with the gang, a handful of lifeless individuals holed up in a French villa while they wait for the arrival of “the merchandise”. There's Jean, the kingpin with a penchant for playing the piano. There's Maria, his young sexpot of a girlfriend, and Danielle, a pretty blonde, low level thug who is the real center of Jean's attention. There's Pierre, the cook and look-out man, and Lafitte, a tough guy prick that takes an instant disliking to Hughes. Much of the film deals with their personal squabbles, whether it's Jean's desperate attempts to woo an uninterested Danielle or Lafitte's attempts to undermine (and at one point, even trying to murder) Hughes. The film does however take a sharp right turn at around the half hour mark when the other member of this gang, Theo, ends up dead with a knife in his back.

But as quickly and unexpectedly as that happens, the murder mystery angle is dropped in favor of more interpersonal squabbles and bickering. For a few moments after the discovery of the body, the film flirts with the Amateur Detective narrative, with Hughes anxious to find out who the killer really is. The film returns to this narrative several times over the next hour, but only briefly, only long enough to remind us – and the characters – that someone in their gang was murdered just a few hours ago. As the film winds on, it becomes more and more of a bog standard crime melodrama. The only scene with any measurable amount of tension is a three minute set piece of Hughes crossing a rickety suspension bridge, but that has more to do with the hand held photography than it does with any kind of purposeful construction on the part of the director.

When the film reaches the final half hour, the body count ramps up quickly but so does the campiness. The killer shows back up, knocking off Lafitte (the discovery of the body prefigures a very similar scene in Argento's THE BIRD WITH THE CRYSTAL PLUMAGE). In the films most unintentionally comedic moment, the killer terrorizes Jean, Danielle and Maria by turning off the lights and shining a flashlight at them. Jean fires pot shots around the room, aiming everywhere except for the flashlight, as the killer unloads canned, maniacal laughs on the soundtrack. This quick and sudden shift into horror territory is as unsuccessful as its attempts at crime drama. It's ridiculous and ham fisted, but after an hour of largely stoic melodrama, it's a nice change of pace.

Then the final reveal comes around and the film once again morphs into something more serious. The motive for the killings is one of revenge, murders carried out to avenge the painful overdose of a loved one. The way the finale plays out, with not one but two reveals after the unmasking of the murderer, is an indicator of just how good this film could have been had it decided to be a thriller rather than a lukewarm crime drama. The ending is a fast and furious bit of fisticuffs and gunshots with a delectable bit of irony tossed in for good measure. But is a good five minutes worth sitting through 81 minutes of forgettable mediocrity to get to? Not really.