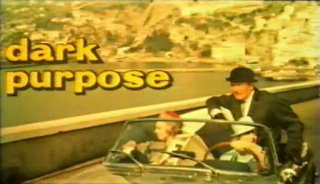 An inauspicious film that feels positively regressive after the self-aware, visually bombastic films of Mario Bava, DARK PURPOSE was an adaptation of a potboiler written by Doris Hume Kilburn. It is, in every way, matinee fare, an Italian-American-French co-production populated by two American stars soon destined for TV films and set in the picturesque city of Salerno, Italy (which we see precious little of). The film had two directors, only one of whom, George Marshall, was listed on my print. Most well known as a prolific director of comedies, Marshall had a few crime thrillers under his belt before he took on the film, most notably the excellent THE CRIME OF DR. FORBES from 1936. The other director on the film, Vittorio Sala, really seemed to contribute only exteriors shot in the streets of Italy with the rest of the film shot either on sets or in an American stand-in for Salerno.

It's a strange film. It feels completely disconnected from its setting and its underlying mystery narrative, offering up this weirdly shifting tone from polite comedy to dreary melodrama to full blown Hitchcockian thriller. It feels as though no one involved really wanted to go all in on any particular style or atmosphere. As a result, DARK PURPOSE feels like a mishmash of other, more accomplished works. There's a bit of Rebecca here, a bit of Wuthering Heights there, all wrapped up in the soppy wet clothing of a soap opera.

The film concerns Karen Williams, the pretty, young assistant to Raymond Fontaine, a smarmy British art appraiser. They arrive in Salerno to stay with Paolo Barbarelli, a reclusive, wealthy man who takes a liking to Karen. As the week goes on, Karen and Paolo grow closer, eventually becoming romantically involved. After Raymond leaves for Rome, Karen stays with Paolo, but grows suspicious of his intentions upon meeting Cora, a woman living in the Barbarelli villa. Paolo introduces her to Karen as his daughter. Cora is suffering from partial amnesia and paranoia, the result of an unfortunate accident. When Cora regains her memory, she claims to be Paolo's wife. Shortly after her recovery, Cora is found dead at the bottom of a seaside cliff. Her death is ruled an accident but Karen has her doubts. Maybe Cora was telling the truth. Maybe she really was being slowly poisoned by her husband so he can lay claim to her significant inheritance.

The death of Cora is the event which pushes this film into the land of the giallo. Before that event, the film dedicates its running time to a wholly unconvincing romance. The first hour of this film feels like an eternity with two barely interesting characters saying barely interesting things about barely interesting things. We learn a lot about Karen and Paolo during that time, but they're simply not very interesting people to learn about. Karen has a dead father. Paolo, according to him anyway, has a dead wife. He's twice her age and has twice her money. She's naive but outspoken. And behind all this driveling melodrama, there's Cora, the character that promises us a mystery, wafting through the story like a ghost in a classic British horror tale. The film largely ignores her character, only giving its attention to her long enough to spill the beans about Paolo. Then, having served her ten minutes of purpose, it tosses her off a cliff.

The final 30 minutes rises above the stifling mediocrity of the first hour. DARK PURPOSE is where we see the first variation of the Poisoned Past narrative come to life. In this film, it isn't someone in the protagonist's past that threatens their well being. It's their lover, compelled to murder or harm because of a buried secret in their past. We learn that Paolo caused the accident that robbed Cora of her memory, locking her away in the house, slowly killing her behind closed doors. Using her obvious mental issues as cover, he dismissed her claims of marriage, citing the now largely ignored Jungian idea of the Electra complex to explain her outbursts. Forced to act when Karen became too suspicious, he murdered his wife so that he and Karen could live happily (and wealthily) ever after.

I can't honestly recommend this film to anyone outside of the giallo faithful. It's only role in the evolution of the giallo was in introducing the first (of many) Poisoned Past variations, one that will become awfully familiar to you as we continue this journey. But apart from that, DARK PURPOSE is a total bore, wasting its appealing leads and lovely locations. It neglects a perfectly good mystery set-up in favor of diving into tired melodrama and as a result loses all momentum. It's a plodding, dull affair with only a lively Shirley Jones as a saving grace.