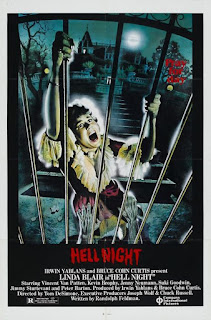 Say what you will about slasher films being formulaic, but that underlying narrative formula kept most of these movies moving along at a brisk pace. Born from the “every ten minutes” rule codified by drive-in masters like Roger Corman, slasher movies were the ultimate in apologetic cinema. Sorry about the bits of story going on here, guys. Have a complimentary decapitation! We're really sorry about this bout of exposition. To make up for it, here's a scene of someone being eviscerated! You really have to try hard to mess up such an easy formula, but here we are. HELL NIGHT, a film that confuses spook show for freak show and takes way too long winding up for a pitch only to have it fly five feet then thud straight back to the ground.

What I'm trying to say is that this movie is so damn boring.

The film begins at a costume party thrown by the Alpha Sigma Rho fraternity. Despite being absolutely jam packed with people, I have to wonder just how popular this fraternity is as there appears to be only two pledges, Seth and Jeff. When Lambda Lambda Lambda has more pledges than you do, it might be time to close the doors. Anyway, as part of the hell night initiation ritual, the pledges will have to spend the night in Garth Manor, the obligatory haunted house of the film. Legend has it that Raymond Garth had a bit of a meltdown one night and murdered his entire family. But there may have been a survivor of that bloodshed, a son who is now a raving lunatic, killing anyone who sets foot in his home. Think THE HOUSE ON HAUNTED HILL except full of people who say “radical”.

So Jeff and Seth are locked in the property by Peter, head jerk of the fraternity, and to keep sexual tension high, they're partnered with two girls from a sorority, final girl Marti and Denise. Now I'm not entirely sure what college these people attend, but I wouldn't be surprised if it turned out to be Scooby Doo University as Peter and his friends begin tormenting the pledges using plastic skeletons on fishing wire, hidden speakers that play canned haunted house effects and two-way mirrors. A good portion of the film plays out like this: Peter plays a prank, spooking one of the girls. Enter one of the guys to carefully and meticulously explain how the prank was done. Rinse and repeat. It's like watching the worst episode of Ghost Hunters imaginable (which says a lot). Unfortunately, the TV show these pledges should have been recreating in their spare time was MythBusters because whadda ya know? Turns out the legend of Garth Manor is true and one-by-one they're all bumped off by a killer.

Which could have been fun if this movie wasn't so damn boring.

I have a few questions. If the Garth Family Massacre only happened about a decade ago, why does Garth Manor look like it was ripped out of a Hammer movie? There are candles everywhere. No electricity at all. Were they Amish? And most certainly Garth Jr. would have killed someone during the set-up for this little prank, right? I mean, it must have taken a full day for Peter and Co. to put all those fresh candles all over the house and set up the speakers and the mirrors and all the other pranks. They've clearly done this before too so why hasn't anyone else ever been killed before tonight? Do I even care? Not really.

But there's nothing else to focus my brain on because this movie is so damn boring.

I did appreciate the films willingness to kill off virtually everyone, sparing us a forced happy ending. If only it spared us the forced romance angle between Marti and Jeff. They're not terrible characters on their own, just thinly sketched, two white do-nothings bitter about their upbringings. Maybe if only one of the two was a self-important whiner, I would have been more engaged, but together they combine to form an unholy personality vacuum that just sucks all the fun out of everything. Seth and Denise on the other hand are so pumped full of hormones that I wouldn't be surprised if Denise's vagina had become sentient, screaming “feed me!” over and over again in the middle of the night. Seth does become the unlikely hero of the film later on, but Denise's sole character trait is that she likes her quaaludes and her Jack Daniels. I think I was supposed to be enamored by this early 80s drug and alcohol abuse, but I could see through the charade. It was just an excuse to get a lingerie-clad Suki Goodwin in bed and keep her there for the majority of her running time. In fact, a good portion of this film is devoted to people just lying in bed.

One of the many reasons why this film is so damn boring.

It's also too fucking long, clocking in just shy of two hours. That is far too long to spend with six or seven characters you wouldn't want to share a three minute elevator ride with. The film takes so long to get to the killings that I honestly started to wonder if this film was ever meant to have a killer in it at all. Maybe this was just a reworked spook show script? The killer is uninspired visually, but as the survival of these characters was the only thing standing between me and my ability to do something better with my time, I found myself rooting for him the entire film. I could see the light at the end of the tunnel. Faster, Ugly Guy in Overalls! Kill! Kill!

Once the film was over, I was noticeably happier. No more pranks. No more listening to people I don't care about talking about living lives I can't relate to. No more bad 80s humor. No more unironic uses of the word “radical”. No more overacting. No more Linda Blair running around in a corset… wait, that was something I liked about this movie.

Overall, HELL NIGHT is too damn boring to recommend. Watch something else instead. Like paint drying.
Posted by David Grant at 12:57:00 PM
Email ThisBlogThis!Share to TwitterShare to FacebookShare to Pinterest
Labels: Absolutely boring, Hell Night, Horror, slasher, Slasher film