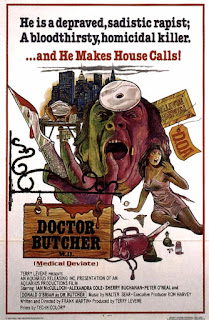 Italian genre film in the late 70s and early 80s was little more than a fad machine. A film would be released, make some money, and imitators would follow suit. Some fads took a bit longer to burn out than others. By the time 1980 rolled around, the cannibal film was on its last legs, quickly losing ground to that other giant of exploitation anthropophagy, the zombie flick. But there was still some gas left in the tank. CANNIBAL HOLOCAUST was released to both acclaim and disgust. It was then, as it is now, the paragon of Gut-Munching Natives vs Civilized White Folk films. It made an impact, reignited (even if only for a brief time) interest in the cannibal film and, as expected, gave birth to a few copycats.

The other film making waves around the same time was Fulci's ZOMBI, a far less salacious, yet every bit as repugnant, shocker that was finding great success outside of Italy. And that brings us to this film, ZOMBIE HOLOCAUST, one of the greatest regurgitators ever produced by money hungry hack Italians. Now, when I say “greatest”, I am not referring to its quality. No, I'm referring to the scope of its regurgitation. It has a set-up (and a score) ripped right from EMANUELLE AND THE LAST CANNIBALS, with a beautiful woman discovering that her place of employment, a hospital, is playing host to a cannibalistic weirdo who treats the morgue as his own personal buffet. When the cannibal is caught, he leaps from a window (pay attention to when the dummy hits the pavement; it's one of the best chuckles the film has to offer), muttering the word “Keto” as he dies. Our heroine, Lori, notices a strange marking on the man's body, a symbol belonging to a long lost cannibal tribe.

Heading off to the island of Keto, Lori is joined by Peter, an anthropologist played by Ian McCulloch. That is the first of many ZOMBI references (aka rip-offs) to come. It's temping to think McCulloch is still playing the character of Peter from Fulci's film. They act the same, talk the same, look the same. Just think of ZOMBIE HOLOCAUST as the second chapter in the epic tale of Peter the Schlub. You might get more enjoyment out of it that way.

When we arrive at Keto, the cannibal film references begin in earnest. There's a smattering of SAVAGE TERROR here, some spike trap shenanigans lifted from JUNGLE HOLOCAUST, and later, a full nude body painting scene torn from MOUNTAIN OF THE CANNIBAL GOD. All the various cliches and tropes are trotted out and displayed, though thankfully the film contains not a whiff of animal cruelty. In short order, a couple of redshirts are chewed up, Peter's assistant George has his eyeballs gouged out, a reporter named Susan goes missing, and Lori is kidnapped by the cannibals. That just leaves us with Peter and his guide, Molotto (played by yet another actor from ZOMBI, the fantastically named Dakar).

Oh and there are zombies wandering around now, the byproduct of a mad scientist trying to unlock the secrets of eternal life via brain transplantation. While Peter finds himself in the clutches of the crazy Dr. Obrero, Lori is crowned Queen of the Cannibals. These two bizarre strands of bullshit collide when Lori leads her army of flesh eaters to Obereo's laboratories (which are just reused sets from ZOMBI). Will our heroes make it out alive? Do we even care?

So yeah, this movie is garbage. It isn't without its charms though. The gore effects are pretty great, featuring some nifty disembowelment and a sloppy brain transplant. There are some genuinely hilarious, if unintentionally so, moments, like how Peter responds to every death with an annoyed order of “bury him and get moving”. In hindsight, the funniest thing about the movie is the beginning. How exactly did a member of a far off cannibal tribe get a job working at a New York morgue? Who checked his references? I would love to see that man's resume.

In the States, ZOMBIE HOLOCAUST was renamed to DR. BUTCHER, M.D. (MEDICAL DEVIATE), a much more interesting and catchy title. It's also much more appropriate. There isn't much of a zombie holocaust in ZOMBIE HOLOCAUST. There's maybe a dozen of the suckers walking around and they never even get to kill anyone. All the bloody work is left to the cannibals and Dr. Obrero. That's more than a little disappointing as the film could have really used a more satisfyingly absurd conclusion. I mean, we have two damn groups of flesh eaters running around, but we never even get a real final confrontation. One group runs in, manhandles the other for a minute or two, and that's about it.

And that's the biggest problem with ZOMBIE HOLOCAUST. It never gets as absurd as you think it's going to get. It's all a big cop out. They should have just stuck to one rip-off at a time. Putting zombies and cannibals in one film makes no sense, commercially or otherwise. It's like going to a restaurant and ordering the ham steak with a side of Canadian bacon. You're just getting more damn ham. And sure, the film manages a few decent bits as it chugs along (for example, it's always nice to see Alexandra Delli Colli in a movie where she isn't being toe fucked or raped, and the murder scenes really do pack a queasy punch), but it really is just the proverbial Boulevard of Broken Dreams, moments of joy that lead to long stretches of regret and emptiness. There really isn't anything much to see here, folks. Move along, move along.