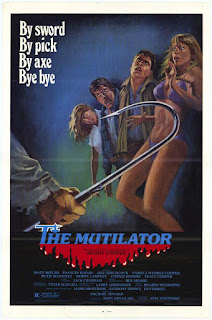 THE MUTILATOR is a movie with two directors but zero brain cells. It began its life with the far less catchy title of FALL BREAK, only to re-titled THE MUTILATOR by its distributors. I have to wonder if that stuck in the craw of its directors. After all, they probably paid good money for the horrible Fall Break song that plays over the opening credits. The biggest failure of the film isn't that it offers up zero chills or thrills. No, its biggest failure, its most glaring and egregious flaw, is that it's boring. So very, very boring.

So what's this film all about? Well, it's about Ed Jr., or as I like to call him, Little Ed. Little Ed is estranged from his father, Big Ed (not a joke, that is how he is referred to in the film). When Little Ed was literally Little Ed, he accidentally shot his mother to death while attempting to clean his trophy hunter father's hunting rifles. This has understandably led to a bit of awkward separation between the two. So imagine Little Ed's surprise when he receives a phone call from his father asking him to head up to the family condo on the beach and close it up for the winter. Little Ed complies with his father's wishes, taking along with him a gaggle of friends. Little do they know that Big Ed is lurking around the property with a big, sharp war ax, just chomping at the bit to cut his son to ribbons.

And after 45 minutes of watching a group of lousy characters drink beer, sit on the floor and walk around the property, Big Ed finally gets down to business, drowning, pitchforking, chainsawing, and all around mutilating our cast of dullards and dip shits.

The film plays it straight, by the way. I kept expecting some last minute twist to happen, like finding out that Little Ed and Big Ed were in cahoots the whole time. That would make sense here, because although Big Ed is a certifiable lunatic that keeps a framed photo of a man he accidentally murdered via ski boat on a mantle piece (and yes, the picture is of the man's bloody corpse), Little Ed is every bit as weird as his dad. Little Ed, with a smile on his face, regales his friends with all kinds of gruesome boyhood memories, including the time he watched his dad slice open a pregnant shark, its little babies flopping all over the floor. I have to wonder, given Little Ed's behavior in the early part of the film, if that plot twist wasn't in the works from the start but dropped as revisions went along.

The acting isn't any good, but its difficult to perform well in a film that is total shit. They're barely even characters anyway, with no real sense of camaraderie or chemistry between them. I know friends often take the piss out of one another, but having Little Ed's best friend tell him “hey, if you hear anyone downstairs, don't shoot. It's just me” comes off as a bit insensitive, don't you think? The film is filled with idiotic lines like that, my favorite being when Little Ed's girlfriend wakes him up in the middle of the night. She's discovered that everyone is missing, a development she explains to Little Ed by saying “All the kids are missing”, which is odd as she's the exact same age as her missing friends. Let me just say this, when Ben Moore, world famous actor from TWO THOUSAND MANIACS! and SHE FREAK, delivers the most convincing performance in your film, you may have made a total turd.

There's also a smattering of weird comedic bits that don't work and a final act that looks like it was filmed in a bowling ball. I could barely tell what the hell was going on as Little Ed and Big Ed had their climactic tussle inside a garage, a tussle that would have had some kind of dramatic oomph to it had the film bothered to give Little Ed time to see that the guy trying to kill him was his father. Sure, the kills are gnarly and suitably gory (effects legends Mark Shostrom and Anthony Showe provided the goods here), but if I only wanted to watch people being fake killed for 90 minutes I would have just watched FACES OF DEATH. It would have been nice to have at least one character worth rooting for or at least one plot development that was interesting, but all THE MUTILATOR wanted to give me was a needlessly tasteless scene of a woman having a giant hook rammed into her vagina.

And maybe that's enough for you, Dear Reader, but not me. No, not at all. I needed something more than that. For 90 or so minutes, I was bored stiff by THE MUTILATOR.
Posted by David Grant at 7:35:00 PM
Email ThisBlogThis!Share to TwitterShare to FacebookShare to Pinterest
Labels: Garbage, Horror, slasher, The Mutilator