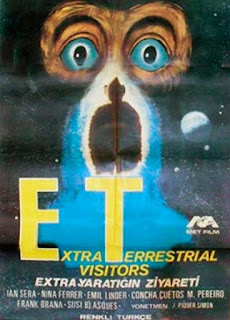 As a lifelong (aka since 1988) fan of Mystery Science Theater 3000, I have a lot of love for EXTRA TERRESTRIAL VISITORS, better known by its US distribution title POD PEOPLE. Episode 303 is unarguably one of the finest MST3K episodes ever produced. It was the perfect pairing of bad movie with sharp witted comedians. But as the years rolled on, I began to wonder...

Outside of the Godzilla and Gamera films (and a smattering of others), I had never seen a single film used by the MST3K crew outside of the show. Can I really say that I've seen EXTRA TERRESTRIAL VISITORS if the only way I've seen it is in an edited, compressed version with people talking over it? Can I really say that I've seen THE UNEARTHLY, MANOS: THE HANDS OF FATE or CITY LIMITS? I suppose I can. I know plenty of people who will claim to have read certain books when in reality they only listened to the audio book. Is there really that much of a difference?

So I decided today that I would spend 80 minutes of my life watching EXTRA TERRESTRIAL VISITORS without the accompaniment of Joel and the Bots. I would try to push the jokes I know by heart out of my mind. I would give it, for what it's worth, an honest chance. How did that work out for me? Well…

EXTRA TERRESTRIAL VISITORS is all about a family and a pop music group under assault by a murderous alien after three poachers destroy the recently crashed alien's egg nest. The only surviving egg ends up in the hands of the family's young son (and budding entomologist), Tommy. The egg eventually hatches and Tommy begins a friendship with the young alien, a curious and relatively harmless little chap Tommy names Trumpy (he looks like ALF with a snout). But Trumpy's mother (or father or whatever) is roaming the forest, obliterating the cast with surprising efficiency, all in search for her (or his or whatever) offspring. How will Tommy's family react when they find out he's been sheltering a potentially dangerous animal? And moreover, who will survive and what will be left of them?

I closed out that paragraph with a quote from the theatrical poster for THE TEXAS CHAINSAW MASSACRE. Why did I do that? Because I wanted to mention, if only for a sentence, a good horror movie. That way, this review won't be completely negative. Because EXTRA TERRESTRIAL VISITORS is NOT a good horror movie. I know, right? I can't believe it either!

That isn't to say that the film is uninteresting. Had I said that, I would be lying. But the reason the film is interesting has nothing to do with the quality of the material on display. It has to do with the fact that EXTRA TERRESTRIAL VISITORS is a Frankenstein film. Not literally, mind you, but figuratively. The film was directed by Juan Piquer Simon, a Spanish filmmaker who was, up until this films release in 1983, best known for his double dose of nastiness, SEA DEVILS and PIECES, the latter being one of the finest bits of over-the-top slasher film action ever made. EXTRA TERRESTRIAL VISITORS began life as a cheapo sci-fi/horror film about an alien running amok in the woods, only to be forcibly transformed into a more family friendly picture when Spielberg's E.T. THE EXTRA-TERRESTRIAL made a killing at the box office.

You can see the seams everywhere you look. What child would sympathize or identify with our pop music group? They're characters clearly meant to be body count fodder and a few seemed to have been hired for their willingness to wear skimpy outfits and disrobe for the camera. But because this is now a family film, the skimpy clothing becomes blouses and blue jeans in a matter of scenes, and the sole shower scene is nudity free. The aliens rack up quite the body count as the film goes along. But because this is now a family film, all those murder scenes are bloodless. I swear, you can actually hear Juan Piquer Simon audibly gritting his teeth as Tommy's grandfather is casually killed by a slap to the belly by one of the aliens, a scene which probably ended in a gory disembowelment before the studio heads decided to neuter the whole film.

Another casualty of the studio decision was the aliens themselves. I can't imagine Simon was thinking of furry, long nosed creatures, which look a bit like someone hollowed out a plush toy and then stuck a child inside of it before sewing it back up, when he started working on the film. But as this was now a family friendly film, I suppose the sight of Tommy cavorting with some kind of giant, drooling arachnid-looking beast wouldn't have appealed to the kiddies all that much. So Trumpy and his mother (or father or whatever) became non-intimidating, cute little beasties with glowing eyes and the ability to make a room full of junk dance around in the air. The overall adorableness of the monsters kills all suspense and terror before it can even start.

So what then are we left with? Well, not much. We have a cast full of nondescript characters that don't do an awful lot, a duo of villains that threaten a chick with rape before being quickly shown the door, and a whole lot of day-for-night photography rendered even more laughable by the overuse of fog machines. There's also a handful of original, though horrible, ditties that play on the soundtrack (I'm sure you know the words to one of them already, don't you?) and some wholly unconvincing special effects detailing the crash landing of the aliens and their various telekinetic powers.

It's shit, really. But it is pretty far from being intolerable shit. Trumpy the Alien has more personality than Trumpy the 45th President of the United States. The cast contains the always likable Ian Sera and some lovely ladies. The bad dub job lends the film some unintentional hilarity (and at least Tommy sounds like a child, unlike Bob from THE HOUSE BY THE CEMETERY). But let's be honest, the version featured on MST3K was a helluva lot better, not only because of the hilarious commentary, but because it cut out a decent amount of the films padding. There are long stretches of nothing to be found in EXTRA TERRESTRIAL VISITORS and they make an otherwise brief and steadily paced turd feel like its taking forever to hit the water.

So in summary, EXTRA TERRESTRIAL VISITORS is still best viewed as Episode 303. Sure, you'll miss out on some profanity (f-bombs in a family friendly film, eh?) and some bickering between the protagonists, but you won't have to make up your own jokes as the film goes along. Win-win, really.