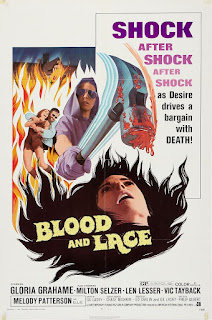 Philip Gilbert's 1971 shocker BLOOD AND LACE feels downright prophetic in many ways, anticipating the later breed of cynical exploitation roughies like THE CANDY SNATCHERS and PETS while also prefiguring the slasher films that would come around near the end of the decade. It begins with the familiar face that launched a thousand slasher films, the POV murder set piece. Here we see an unknown killer bludgeon a middle aged prostitute and her John to death with the claw end of a hammer, all before setting the house ablaze. Luckily, the prostitute's daughter, gorgeous 17-year old Ellie, survives the ordeal unharmed.

As she is still considered a minor, Ellie finds herself a ward of the state and is sent to an orphanage run by the domineering Mrs. Deere. Little does Ellie know, her stay at the orphanage isn't going to be a pleasant one. We've already witnessed Mrs. Deere's right hand man, Tom, chase a young man through the woods. The chase ends when Tom cuts the boy's hand off with a cleaver, leaving him to bleed to death in the bushes. This is just how things work at Mrs. Deere's place. First offense, you get slapped around a bit. A second offense might end with you being tied to a pole in the attic and left to starve to death. Trying to run away… well, we know how that ends, don't we? Mrs. Deere can't allow children to run off, can she? That would hurt her bottom line. After all, every kid she takes in comes with a nice stipend from the state.

But Ellie's first few days at the orphanage aren't that bad. She meets a few of the other kids, like Pete, a wormy chump who is always trying to steal food. She is given a roommate, a slightly younger girl named Bunch (seriously). And then there's Walter… Oh, dreamy, dreamy Walter.

Ellie also has a friend of sorts in Detective Carruthers, the man investigating her mother's death. But I'm not too sure Carruthers is the kind of friend Ellie needs. Maybe it's the way he looks at her or the way he describes her as “good breeding stock”. Truth be told, there might not be a single person Ellie is safe to be around. We already know that Tom is a killer, but Mrs. Deere is showing instabilities of her own. She sometimes creeps into the basement to have conversations with someone unseen. Worse, Ellie begins to see a man standing above her bed at night, his face charred, a hammer clutched in his hand. As the walls slowly close in around her, is there anything Ellie can do to escape this nightmare? Or is she destined to end up like all those missing “runaways”, slowly rotting inside Mrs. Deere's meat freezer?

BLOOD AND LACE is probably best described as “comfortable”. I know that might sound like an odd way to describe a movie that contains murder, implied pedophilia, attempted rape and child abuse, but the attitude of the film is far more unoffensive than you might think. Sure, it's sardonic and confrontational at times, but the film somehow manages to skirt around the potential offensiveness of its subject matter by being effortlessly charming and not forgetting its sense of humor along the way. Despite some narrative and thematic similarities, it lacks the cruelness of films like HOUSE OF WHIPCORD and though the violence on display is sometimes graphic, the film doesn't wallow in its bloodshed. It's a good Saturday afternoon kind of horror film, the kind you watch when you want some thrills and chills, but don't want your day ruined by being reminded that the world is a toilet in desperate need of flushing.

The film is good looking with a swift and steady pace, doling out new developments and fresh shocks every ten minutes or so. The casting is absolute perfection. We have Gloria Grahame (of OKLAHOMA and THE BIG HEAT fame), Len Lesser (good ol' Uncle Leo from Seinfeld), Vic Tayback (Mel on the great sitcom Alice), a young Dennis Christopher (probably best known by horror fans as adult Eddie in IT) and most importantly, the lovely Melody Patterson (who looks a bit like a prototype of Naomi Watts) as Ellie. Put simply, these people have personality and as Sam Jackson once said, personality carries great distances. The entire cast is full of life, just a parade of great faces and voices. Even if you're finding the story of BLOOD AND LACE a bit underwhelming, chances are the performances by this first class batch of character actors are going to pull you through.

And there's a damn good chance you WILL be underwhelmed by the story at times. BLOOD AND LACE is all too familiar and some of its shocks have been rendered somewhat moot by decades and decades of higher profile films that played many of the same games. You're likely to guess the identity of the killer from the first scene (even if you'll probably never see the second and third twists of the ending coming) and because of the age of the film, it never commits to either of its two closest sub genres. Had the film been made three or four years later, it would have tumbled down the hole of crass sexploitation, a hole it spends a full half of a film digging. Had it been made around 1979 or so, it would have descended into full blown slasher territory. I can imagine some people growing frustrated with this films commitment issues.

Personally, I find the lack of a clear identity to be one of the films strengths. I like that the film sometimes meanders a bit thematically before ratcheting up the sleaze and intrigue. I like that the slasher elements only creep into the film once the trap surrounding our heroine has been set. When the man with the hammer makes his first appearance, it's already too late for Ellie to make a move. Stay or leave, chances are she will end up dead either way. With decades and decades of horror and exploitation films still fresh in memory, the undeveloped land BLOOD AND LACE inhabits comes complete with not quite recognizable back alleys and boulevards. The film doesn't need to work to subvert your expectations. It just needs to do its thing. We, the audience, are the people with historical hindsight and we, the audience, are the ones expecting the film to behave according to rules that no one had written yet. So when BLOOD AND LACE takes a sharp right, it sometimes feels counter intuitive. It's that element of the film that I enjoy the most. It's like taking a new path to a familiar place. You may end up where you always end up, but the way the trip plays out feels wonderfully different.
Posted by David Grant at 12:09:00 AM
Email ThisBlogThis!Share to TwitterShare to FacebookShare to Pinterest
Labels: Blood and Lace, sexploitation, slasher