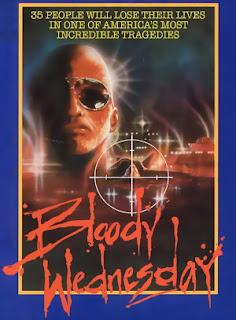 “The evening news on television keeps reminding us we live in a violent world. After sundown most of us try to keep off the streets, and stay out of public parks. We feel safe in our homes behind locked doors. The last place we would feel threatened is our neighborhood coffee shop. The film you are about to see depicts what happened in one of these coffee shops.”

That's the opening text crawl from Mark G. Gilhuis' BLOODY WEDNESDAY, a cult oddity that was released on VHS in 1987. At first, I didn't know what that title referred to. I figured it was just another lazy, direct-to-video slasher film, like SPINE or 555. But no, the title BLOODY WEDNESDAY refers to a real life event, a mass shooting that occurred at a McDonald's restaurant in San Diego on Wednesday, July 18, 1984.

To be honest, that all but killed my buzz. Here I was, bored and in desperate need of entertainment, and what film do I choose to watch? A movie based on what was, at the time, the single deadliest mass shooting in American history.

But truth be told, BLOODY WEDNESDAY is as concerned with an accurate portrayal of those events as I was interested in watching an accurate portrayal of those events. What Gilhuis, working from a script by Oscar winner Philip Yordan (do NOT let that fool you into thinking this is an award worthy film), delivers is about as realistic as Celebrity Death Match. This is perhaps the shining example of exploitation. It takes a real life tragedy and reduces it to camp fodder. BLOODY WEDNESDAY might be inspired by atrocity, but it is beholden to idiocy.

Our lead character is Henry, a man having a bit of a rough patch. His unnamed (and probably undiagnosed) mental troubles have left him unemployed. He is long since estranged from his wife, almost entirely reliant on his older accountant brother to live, and, to put it bluntly, quite bonkers. After wandering through a church service naked, Henry is locked up in an asylum. He meets with his psychologist, Dr. Johnson, a statuesque, lovely blonde. She thinks Henry should be locked away for good. Naturally, Henry disagrees. But Dr. Johnson persists, calling him a danger to others, but Henry assures her that he doesn't want to harm anyone, that he just wants to leave. After three or four minutes of being condescended to by his doctor, Henry finally snaps, giving Dr. Johnson a nice verbal lashing. Instead of that outburst confirming her suspicions about Henry's temper, Dr. Johnson decides to let Henry go.

Someone take this woman's license from her, please.

With nowhere else to go, Henry's brother sets him up in an abandoned, probably condemned, hotel. Henry spends his days talking to his stuffed teddy bear and playing with toys in the bathtub, only occasionally bothered by the usual things. You know, ghosts, hallucinations and a trio of thugs dressed like Rambo. After a short time living in his new digs, Henry's condition begins to worsen. He imagines a friendly bellhop, a jovial chap that tells him about all the nasty things that went down in room 1327. And as all of this is going on, I'm sitting here in front of the TV asking myself

WHAT THE HELL DOES THIS HAVE TO DO WITH NOT FEELING SAFE AT COFFEE SHOPS?!?

Well, Henry finally does go on a mass shooting spree, albeit in a diner, not in a coffee shop (this film is a fucking liar), but that little bit of slightly unnerving action only takes place in the final 10 minutes of the film. And that's a big problem because the other 80 minutes are spent watching Henry bounce around inside this obvious and uninteresting clone of THE SHINING. At one point, Henry becomes desperate for money. He asks his friend the bellhop where he can get his hands on some moola and the bellhop tells him all about a rich jerk that comes by now and then looking for a suitcase full of money. So what do we get to watch Henry do? We get to watch him fight a man for a suitcase full of money.

Only we know the man isn't real. We know the bellhop isn't real, either. And we damn well know that the suitcase Henry finds isn't going to be full of diamonds. So what's the point of this eight minute sequence of events? Is it to illustrate that Henry is going insane? That's clearly evident already. In fact, it's been evident from the first scene in which a despondent Henry all but says “yo, I'm going nuts”.

I suppose the point of putting such an obvious bit of nonsense into the film was to make us doubt the veracity of pretty much everything else in front of us. At one point, Henry is chased by the returning trio of thugs. He produces a gun from inside his stuffed bear and holds the three jerks hostage, all before playing an impromptu game of Russian roulette with them. He then lets the three men go, only to have them show up again later on. They decide, instead of dealing with Henry directly, to give him the machine gun he desperately wants. Better for Henry to get himself offed or arrested than to risk arrest for killing him themselves.

But did that really happen? We know that Henry hallucinates a seduction scene between himself and Dr. Johnson, but are Henry's other visits to Dr, Johnson hallucinations too? Henry's soon-to-be ex-wife visits him at the hotel and attempts to seduce him. Henry drowns her in a bathtub. As her body floats in the tub, Henry's brother visits. When he goes to take a piss, there's no body in the bathtub, but when Henry walks into the bathroom after his brother leaves, the corpse is still there. So what was the hallucination? The murder or the visit from his brother?

This kind of thing could have been incredibly interesting had any of it served any real purpose. As it stands, very little of the first 60 minutes informs the final 30. For most of the film, Henry is a passive character, doing little more than sitting around, having freak outs and being berated by his brother. Had the troubles in his life, like his madness, his failing marriage, his unemployment, been used as a vehicle to push him towards his date with destiny, it would have felt like a meaningful progression. Unfortunately, none of that is of any real consequence. Instead, around the 60 minute mark, the film suddenly takes on unprovoked anti-classism attitude. Henry becomes angry at the rich people, the people with good jobs and security, all the things he's lacking. As a result, Henry kills a diner full of working class people because…?

The allegory doesn't work because the allegory isn't earned. The violent coda of TAXI DRIVER, another obvious influence on this film, works because it was the logical conclusion to its story. It served a purpose. The violence that caps BLOODY WEDNESDAY feels tacked on, added just so the film could earn that “based on a true story” tag line. The logical progression from Henry the off-his-rocker sad sack to Henry the machine gun totin' mass murderer doesn't make much sense here. It's a weird shifting of tone and action that feels completely at odds with itself. Sure, it's a tough scene to watch, especially with the knowledge that it was based on a real life massacre. But that's really all it amounts to, just a tough scene to watch. It's a proper ending to some story. I'm not convinced though that it was the proper ending to this story.
Posted by David Grant at 9:00:00 PM
Email ThisBlogThis!Share to TwitterShare to FacebookShare to Pinterest
Labels: Bloody Wednesday, Great American Massacre, Horror