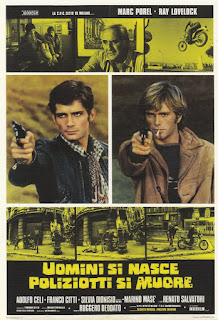 The simple mathematical equation “Italian police action film + writer Fernando Di Leo + director Ruggero Deodato” should have resulted in a film so full of nihilistic energy that it would have leapt off the movie screen to create a black hole of meaninglessness so vast that it could swallow the entire universe whole. So how then did we end up with LIVE LIKE A COP, DIE LIKE A MAN? It's a perfectly valid question that I simply don't have a perfectly valid answer for. To say that this film is a little bit idiosyncratic is like saying the sun is a little bit hot. It's a weird film, both in its construction and its motives. Half of me wants to dismiss it as some kind of joke. The other half is too busy chuckling.

It seems like Deodato is playing the same game Andrea Bianchi played with STRIP NUDE FOR YOUR KILLER. Bianchi's 1975 giallo film is half send-up, half serious genre entry. But while Bianchi took everything the giallo is known for (the machismo, the sleaziness, the violence, the sex) and cranked it all up to 11 in an attempt to see just how seaworthy his flimsy vessel was, Deodato and Di Leo take everything the poliziotteschi was known for and… well, they just screw around with the equalizer a bit until it all sounds decent.

Our main characters are Fred and Tony (played by pretty boy actors Marc Porel and Ray Lovelock, respectively), two cops assigned to an unnamed and unexplained “special squad”. They're not just partners, they're roommates too. In fact, the pair seem inseparable, doing their jobs together, drinking coffee together, raising a cage full of love birds together. In short, the homoeroticism is pretty evident. From the opening scenes of our two handsome men riding a motorcycle through the streets to the way they playfully roll around in the dirt while shooting tin cans for target practice, they're one “I wish I could quit you” away from being nominated for an Oscar.

In fact, from what I can gather, the original intention WAS to have these characters be closeted gay men. That little bit of characterization would have clarified much of the overt “look how much masculinity I can project” mannerisms these characters give off throughout much of the film. As it stands, Fred and Tony's sexuality feels a bit odd, like the way they half-heartedly flirt with a secretary or engage in a bit of sex with a young nymphomaniac with a level of excitement that registers one notch above “meh”. Italian genre films usually treated gay men as perverts, red herrings or comedic relief. I can imagine the glee Di Leo, the purveyor of some of the roughest police actioners ever made, felt when he came up with the idea of subverting the straight, macho action hero. But alas, that angle was dropped.

And to be fair, it feels like a lot of angles were dropped here. This is ostensibly a movie about two special squad coppers trying to take down a mob boss named Bibi, a ruthless man not above plucking out someone's eye to settle a debt. But the film constantly veers away from that narrative to give us wholly unconnected (or very flimsily connected) scenes of Fred and Tony driving their motorcycles, taking down whole gangs without breaking a sweat, and even torching a whole parking lot full of cars. It feels like we're watching a condensed version of a television series about two good looking cops that play by their own rules. Throughout the action set pieces, I kept expecting the screen to freeze and hear a voice say “looks like the boys have gotten themselves into quite a pickle”. To my surprise, there was no scene of the increasingly frustrated special squad commander lifting his fists into the air, shaking them wildly as he screams “MAVERICKS!!!”.

There's a real playful air about the film. We see our coppers getting chewed out for always leaving dead bodies in their wake. They decide to go get a cup of coffee immediately after and within two minutes are shooting a whole gang of would-be bank robbers to death in the street. Fred and Tony are, in every way, shape and form, Paul Kersey with badges and more cheerful dispositions. They show up to a hostage situation, tell the person in charge of the entire Rome police force to back off, and then proceed to drive their motorcycles through the windows of the home, gunning down every hostage taker in sight. They rack up a higher body count than most slasher film villains and they do it all without ever once appearing stressed, angered, depressed or cynical. They are, without a doubt, gods among men, the kind of action heroes these films love and admire.

Only they have their sexual advances spit back into their faces by every woman they meet, except a nymphomaniac to whom their charms matter less than their ability to simply get an erection. They also don't even get to finish off the bad guy in the end. They're too busy being distracted by a barely clothed Swedish girl (who also appears to be totally uninterested in them). They're also told that they're little more than delinquents, robbing them of the kind of authority movies like this tend to heap upon their heroes. We're supposed to be impressed by how masculine these characters are and how macho they appear, but in the end, that air of awe inspiring masculinity comes across as a facade. They're just pretty guys with guns who are actually not very good at their job. They're just better shots than their opponents.

Of course, LIVE LIKE A MAN, DIE LIKE A COP has the unmistakable whiff of social commentary these films always have. Political and police corruption always creep into the narrative of poliziotteschi. This film is no exception, but the harder edges of the poliziotteschi have been sanded down here. For as violent as the film can sometimes be, nothing is really of consequence. Actions rarely lead to dramatic gut punches. An early scene of a special squad member getting gunned down in front of our heroes doesn't lead to a rousing speech about vengeance and resolve. It's followed by a lightly comedic scene of Fred and Tony setting fire to a bunch of cars. The film never reaches any kind of critical mass in terms of drama or tension. As I said, this is a sometimes very bloody affair, but the weirdly cheerful and playful tone, while downright intoxicating for fans of that kind of stuff, always reduces the blood and misery to little more than a punchline.

This might very well be the most lighthearted poliziotteschi film I've ever seen and for as inconsequential as it all is in the end, LIVE LIKE A MAN, DIE LIKE A COP is still a movie I would recommend watching. Personally, I find the schizophrenic tone confusing and the lack of dramatic pull disappointing, but I'll be damned if the film isn't wildly entertaining at times, even if I never quite knew what the hell I was supposed to be feeling as the film unraveled before my eyes.

Posted by David Grant at 10:55:00 PM
Email ThisBlogThis!Share to TwitterShare to FacebookShare to Pinterest
Labels: Fernando Di Leo, Live Like a Man Die Like a Cop, Poliziotteschi, Ruggero Deodato