THE DORM THAT DRIPPED BLOOD 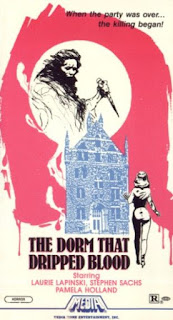 Trying to review THE DORM THAT DRIPPED BLOOD is a bit like trying to review silence. No matter how you approach it, you're just going to wind up talking more about absence than substance. Because what exactly can you say about silence? What exactly can you say about this movie? The phrase “nothing happens” is usually tossed out to describe how boring a movie is. Of course it isn't true. Things happen in every film. Hell, things happen in THE DORM THAT DRIPPED BLOOD. But just barely. Just enough for it to qualify as a movie. Nothing more, nothing less.

The movie is about four college kids spending time all alone in a soon-to-be renovated dormitory. They spend their days tossing out desks and cleaning the place up, and their nights being spooked by some weirdo with Art Garfunkel hair. Soon enough, a killer shows up to bump them off one by one. That's it. That's the plot of THE DORM THAT DRIPPED BLOOD. I wouldn't be surprised to learn that those three sentences comprised the entirety of the films screenplay.

So yes, things happen in this film, but every action and plot point exists without explanation or clarity. For example, why are these four college kids tasked with doing a floor-by-floor clean-up, all alone, of an extremely large campus building? What's the story behind that large group of college kids we saw at the beginning of the film in the pick-up truck? Who was that guy that got killed just before the credits? We never saw him before and we certainly never hear of him again. What's the story with John, the creeper at the dorm? Is he an ex-student? Does he work there? He clearly isn't some random guy because everyone knows his name. So what's his story? Why does the film set up a love triangle between Joanne, our Final Girl, her boyfriend (a character so memorable I can't even remember his name) and bashful Brian if Joanne's boyfriend leaves the film around the 15 minute mark?

Worse, the film introduces yet another love interest, but only in a single scene, then has that character disappear for nearly the entirety of the film, only showing back up for the final five minutes so the film can have an oh-so-ironic twist at the end. We have a killer whose motive revolves around being madly in love with Joanne even though the film never once hints at anything close to that when we spend time with the killer pre-final reel reveal. Everything here, everything the film throws at us during its last hour, feels made up on the spot. Nothing gels and nothing holds together, all because the film is missing vital connective strands of narrative. Without those bits and pieces, all the action feels disjointed, random and even pointless. Sitting here now, trying to review it, trying to think of a way to somehow connect those dots...

I'm reviewing silence. All I can focus on is what is missing. All I can think to do is to describe the absence.

Truth be told, the first 15 or so minutes of the film are decent. We meet our characters, get acquainted with the setting, and get our first taste of blood. The triple murder of the lovely Debbie (played by the always fetching Daphne Zuniga) and her parents is suitably nasty. It's a good set-up for a slasher film. After that, the film just meanders and the whole thing goes off the rails. I kept waiting for it all to gel, for the film to finally commit to doing something, ANYTHING, with its characters and its set-up, but it never did. Everything after those first 15 minutes is lazy, half hearted and utterly empty. Sure, there's some gnarly deaths from time to time and the film does manage to get its shit together for a longer than usual climatic chase, but all I could think about the entire time was how little actual story this film was telling.

I don't even need to mention the terrible acting, the lackluster direction or the score that desperately wants to be the score from FRIDAY THE 13TH. I don't need to mention the idiocy of some of the scenes, like the way the pre-reveal killer behaves as if there's a camera on him at all times, even pretending to knock himself out to throw us off, as if there was anyone else around to see it except the audience. I don't need to mention any of that, because that isn't really a problem with a z-grade slasher film. I can accept all of that to some degree. No, what truly sinks THE DORM THAT DRIPPED BLOOD is the utter lack of gravity and narrative cohesion.

There's no story here. There's no motivation. There's nothing to hold my interest, no real characters to give a shit about, just people on screen doing uninteresting things for reasons never clearly explained. The level of narrative reductionism present here is absolutely aggravating. There's a moment in the film where a character named Craig talks about how he sweet talked a professor into giving him a good grade. When his love interest tells him that she thinks students should earn their good grades through hard work, Craig scoffs at her. That is THE DORM THAT DRIPPED BLOOD in a nutshell. It does the bare minimum of work, tossing out a few nasty death scenes along the way, all in hope that the sight of a drill splitting open a skull will so utterly charm us that we will forget that what we're watching is just a lazy, incompetent do-nothing.
Posted by David Grant at 1:52:00 AM
Email ThisBlogThis!Share to TwitterShare to FacebookShare to Pinterest
Labels: Death Dorm, Horror, Pranks, slasher, The Dorm That Dripped Blood, Video Nasty