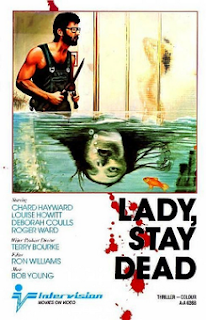 The oddly titled LADY, STAY DEAD is an Aussie thriller from 1981, written and directed by Terrie Bourke, probably best known for his Worst Film of All Time contender INN OF THE DAMNED. It's a film that begins by juxtaposing a scene of a woman swimming naked in a pool with a scene of a bearded man in women's underwear cuddling up in bed to an exquisitely dressed mannequin. That man, Gordon, has a relationship with that woman, Marie. Not a romantic relationship, mind you. He's the caretaker around her large, expensive home, a home she purchased with the copious amounts of money she makes as a pop singer.

Those issues become crystal clear when he clumsily attempts to seduce Marie a little later on. When she tells him to take a hike, Gordon looses control. He violently rapes her. And when Marie refuses to show her rapist any gratitude for her bodily violation, Gordon looses it again, this time drowning Marie in a fish tank. Once he regains his composure, Gordon attempts to carry Marie's body out to his car, only to be interrupted by Marie's kindly old neighbor and his dog. Guess what happens to them?

So far, so family friendly. For most exploitation films, that might be enough, but because we're only 25 minutes (!) into a 90 minute movie, things start to go even further downhill. Marie's sister, Jenny, shows up at the house. She meets Gordon and, for awhile at least, everything goes well enough. As the night wears on though, Jenny begins to worry about her sister. She also finds the poor dead dog washed up on the beach. When she makes the trek over to the kindly old neighbor's home, she finds the kind, old fella strung up in his garage. Justifiably freaked out, Jenny runs home to call the police, only to have Gordon show up in a nice suit, all ready to spend a nice, relaxing evening with the new object of his affection.

What follows is a bit like STRAW DOGS, only shittier. LADY, STAY DEAD slips out of the murderer focused thriller territory and jumps headlong into the home invasion flick. Gordon cuts the phone, cuts the lights, attempts to break though the window, etc.. His attempts at gaining entry are thwarted at every turn by Jenny, who turns out to be rather capable of taking care of herself. But then two coppers show up for the long climatic battle and Jenny becomes as useless as a Comcast customer service representative.

LADY, STAY DEAD is a weird film with a constantly shifting tone and a rather blasé attitude towards its own violence. It wants to be a roughie, but it lacks the misanthropic fortitude. It wants to be a tension filled thriller, but its too damn lazy to put in the work. Instead, the film just tosses in violence because it knows movies like this contain violence. It tosses in a shootout because movies like this usually have shootouts. It turns our otherwise capable heroine into a screaming damsel in distress because films like this usually have them in droves. Hell, Bourke turns Gordon, an ordinary, nothing special individual into goddamn Jason Voorhees near the end of the film. Why? Because films like this usually contain antagonists that can shrug off grievous bodily injury for the sake of false endings.

And don't get me wrong. LADY, STAY DEAD is a perfectly watchable, sometimes quite enjoyable, cult oddity. But it's the “oddity” bit that kind of sticks in my craw. The film reminds me a bit of Luis Alcorzia's TERROR AND BLACK LACE, another weird thriller, this time from Mexico, that was released in the 1980s. Both films feature a bizarre lead villain (in Alcorzia's film, it's a sex pervert that collects tufts of women's hair; here, it's a dude that is clearly wearing a stolen pair of Marie's panties while he dry humps a mannequin dressed exactly like her) and a more than capable heroine that eventually gets the better of him. But Alcorzia's film largely wastes its more idiosyncratic flavor, devolving into something stereotypical and tiring. It becomes, in the end, just another light weight thriller that checks every single box on the long list of “things people expect to see in a thriller film”.

LADY, STAY DEAD ends up pretty much the same way. It never really steps outside the comfort zone and as result, it never really forms its own identity. It clearly had some kind of influence from films like PSYCHO or DEATH WALKS ON HIGH HEELS, both excellent thrillers in which our female leads meet sticky ends only for a new narrative to start up in their wake, both headed by a close relative of the victim. But LADY, STAY DEAD needed to do something different instead of simply repeating the first act all over again, only this time with more pots of boiling water. Sure, the arrival of the cops and the subsequent shootout (and a darkly hilarious accidental death by immolation) punches up the fun by a few notches, but the whole thing, while enjoyable enough, felt like a familiar walk through the same old damn park.

What the film needed was one detour, one new route through the old stomping grounds. But hey, what the film does, it does well enough to warrant a recommendation. I suppose not every film needs to reinvent the wheel, right?