A CANDLE FOR THE DEVIL 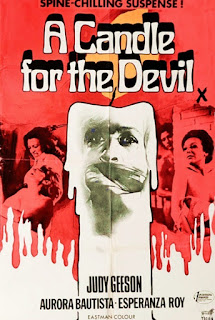 A CANDLE FOR THE DEVIL takes place in a small, quaint village in Spain, so inconsequential that it doesn't even have a police force. Somewhere near the center of the village sits an old hotel, owned and operated by two sisters, Marta and Veronica. The village feels like a place stuck in time, not too dissimilar from the town of Accendura in Lucio Fulci's DON'T TORTURE A DUCKLING. Though there are a few young men roaming the streets, the women we see are mostly older, middle aged at best. Into this setting, several younger women are introduced, all products of the women's liberation movement. Their bare midriffs, outgoing nature and flirtatious personalities are all greatly appreciated by the men in the village. The women, however… That's a different story.

Marta in particular has no patience for these city women and their newfangled sexual liberties. She shows no hesitation in putting them in their place using all manner of implements from kitchen knives to axes. Marta believes her actions to be the result of “divine providence”, that she is to carry out “God's hand of justice”. While struggling a bit more with the consequences than her sister, Veronica enables her sister's “justice”, even helping her with the disposal of the bodies, a nasty bit of business that involves dismembering the corpses before dumping them in an unused vat of red wine in the cellar.

The arrival of Laura, a well mannered British woman, begins the downward spiral. She's in town to meet her sister, May, one of the many victims of the sisters. Though Marta insists that May skipped town, Laura is unconvinced. As more and more of the hotel guests, all of whom are younger women, begin to disappear, Laura starts to suspect that the sisters are up to no good.

If you're a fan of budget DVDs and VHS lots, chances are you've come by A CANDLE FOR THE DEVIL once or twice in its butchered US form, IT HAPPENED AT NIGHTMARE INN. While the title is far more appropriate, the treatment Eugenio Martin's 1973 shocker received in the US is a damn crime. Most of the quiet moments were removed, much of the dialogue shortened. Gone were many moments of religious symbolism, the emphasis placed instead on the film's multiple and oftentimes gruesome acts of violence. It may have helped a bit with the pace, but it definitely blunted the impact of the film.

A CANDLE FOR THE DEVIL is a slow moving, character oriented film. There is no grand moment where everything falls apart, no tremendous display of explosive violence to cap it all off. The film is all crescendo with no bombast. The narrative doesn't build and descend quickly like a roller coaster. It slowly and methodically crumbles to pieces right alongside the lives of its characters. It is, shall we say, more than a little anti-climatic, but I feel that the quiet, almost melancholic ending feels appropriate. This is an understated film, through and through, and surprisingly so given its exploitation underpinnings.

The film touches a bit on ageism. Marta was left at the altar, her finance having run off with a younger woman. Veronica is having a love affair with Luis, a man half her age who sometimes works at the hotel. When Laura arrives to find her sister, Veronica forbids Luis to talk to her, worried that she too may be left behind for a younger woman. Marta, pumped full of religious fervor, still stops off to spy on Luis and some boys prancing around naked in stream. After gazing at the genitals of what appears to be a prepubescent boy, Marta walks through bristles, effectively scourging herself for her sin of lust. They are women who feel betrayed by their age, swept aside by the sexual revolution, slowly (if not already) made disposable by time.

This feeling of neglect and jealousy becomes mixed with fire and brimstone Catholicism creating a dangerous concoction. Again like Fulci's DON'T TORTURE A DUCKLING, people are killed for the supposed sin of youthful sexuality. May must die because men look at her with lustful eyes. A visiting free spirited girl must be killed because she drinks and flirts with men. The only woman Marta shows kindness to is a mother traveling abroad with her infant child. When they first meet, the woman tells Marta that she is married, but a simple bit of harmless banter with a grocer comes back to bite her on the ass. Marta is told that the woman staying under her roof is looking for husband, not married to one. So she too must die. As the sisters clean up the mess, Veronica finds a letter written by the woman's husband. She was in fact married but unhappily so. Her child was not a bastard, as Marta feared, just an unfortunate party to a collapsing union between a man and a woman. No matter, Marta tells her sister. It doesn't matter if she was married. She was seeking a divorce. She was wishing for liberation. Moreover, she was young and Marta, her mind warped by both jealousy and religious fervor, views both as sin.

A CANDLE FOR THE DEVIL is a film drowning in jealousy, repression and Catholic guilt. It is full of religious symbolism and reductive moralism. While it never becomes as pointed in its criticism of the strict religious mind set as DON'T TORTURE A DUCKLING, the film never shies away from calling out hypocrisy when it sees it. It never makes heroes out of its murderous leads, nor does it ever once condone the homicidal fury they carry out. But A CANDLE FOR THE DEVIL isn't really all that interested in moralizing or lecturing. There are no moments when a character looks at the camera and says “this is a perversion of moral thinking and theology”. It lets the characters act according to their natures and trusts us to form our own condemnations as the film goes along. It clearly has an opinion of its own, that's for damn sure, but I appreciated the film never grand standing or screaming that opinion in my face. I could just sit back and watch these characters destroy themselves under the weight of their own poisonous and misguided attitudes.

Visually, the film is a treat, but the oftentimes free form nature of the narrative does make the film drag a bit, especially in the second act. Top billed star Judy Geeson feels superfluous, because even though Laura does eventually get around to snooping and talking with the police, it isn't her investigation that brings the sisters down. It's a simple (but grotesque) oversight that does that. Her character brings little to the film, except maybe a bit of overseas marketability. But that is all that I can find wrong with the film. For all its seriousness, there is a bit of black comedy to be found here and more than enough moments of delicious irony (much of the on-screen nudity is provided by our morally righteous antagonists). It's pleasant in its unpleasantness, a nice tall glass of exploitation goodness that I can't recommend highly enough.

Posted by David Grant at 2:52:00 AM
Email ThisBlogThis!Share to TwitterShare to FacebookShare to Pinterest
Labels: A Candle for the Devil, Eugenio Martín, Horror, It Happened at Nightmare Inn, Judy Geeson, religious thriller