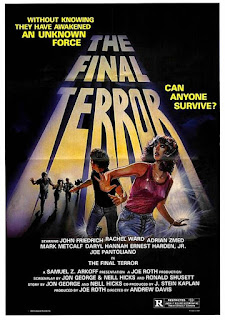 THE FINAL TERROR, a 1983 slasher film from future THE FUGITIVE director Andrew Davis, has all the hallmarks of your typical 80s slasher film. It features a group of horny men, all forest rangers, heading off to some remote part of the woods for some quality time with their weekend girlfriends. It gives us a possibly insane, often bullied, doomsaying weirdo in Eggar, a mechanic with every reason to want these people dead. We get the usual campfire story about an evil urban legend, in this case an insane woman roaming the woods, looking for fresh blood. We get a dilapidated cabin, complete with body parts in glass jars. For the first 50 minutes of this 82 minute movie, everything goes according to plan.

It's the last half hour or so of this film that sets it apart from other 1980s killer in the woods flicks. What makes THE FINAL TERROR worth seeing, what makes it memorable within the pantheon of lazy, xeroxed cash grabs, isn't what it does in accordance with the rules of the slasher film. It's what it doesn't do. Shortly after the killer bumps off what we would presume to be our lead characters, the film shifts in tone. It ceases to be a routine slasher and becomes more of a survivalist thriller. We leave the comfortable waters of JUST BEFORE DAWN and descend into the rapids of SOUTHERN COMFORT.

Our surviving characters choose a leader from their ranks, a Vietnam vet named Zorich. They smear their faces with mud and ditch their white shirts for more easily camouflaged browns and greens. They organize a raid on the rundown cabin in the woods, hoping to catch the killer off guard. They become proactive in their survival instead of waiting to die at the hands of a raving lunatic. There is no Final Girl in THE FINAL TERROR. There are no cops coming to the rescue. There is no long and drawn out climatic chase scene. Our characters become the hunters, the killer becomes the prey.

It's an interesting change of pace, to be sure, and the gorgeous forest scenery makes for a beautifully claustrophobic setting. Yes, the film ends with a moment of credulity shattering nonsense, the kind of action set piece you would see in some ludicrous 80s action flick, but for the majority of the last third, THE FINAL TERROR is a remarkably effective thriller, far more satisfying than the slasher bits that came before.

In terms of viscera, the film is sorely lacking. For sheer sexual gratuity, you would be better off looking elsewhere. I imagine for audiences in 1983, THE FINAL TERROR must have felt like a disappointing bit of bait and switch. It's generic title promises generic scares. The fact that the film has become a bit of a cult classic doesn't surprise me. The way it plays with slasher tropes and circumvents expectations makes it feel like a bit more unique than its contemporaries, even 34 years after the fact. It would be a gross exaggeration to claim that THE FINAL TERROR is a masterpiece of 1980s horror, but I think it's a film that should be seen by fans of the slasher film, if only to serve as an example of how little variation actually existed within the sub-genre back in the 1980s. It would have been easier for Davis and Co. to just make yet another simplistic, by the numbers slasher film. Hell, it probably would have made them more money.

But THE FINAL TERROR decided to ditch orthodoxy for unconventionality. At the end of the day, the film might not be much more than a skillfully crafted bit of 1980s exploitation, but I thoroughly enjoyed its company over those 82 minutes. The fact that it's a generally well acted and oftentimes gorgeous film was just icing on the cake. There's pleasure to be had here, folks, and if you're the kind of person who adores the heyday of stalk and slash thrillers, you really do owe yourself the opportunity to experience just what can happen when a filmmaker throws out the rule book. THE FINAL TERROR is a curve ball of a slasher film and that, more than anything else, is reason enough to watch it.
Posted by David Grant at 3:10:00 PM
Email ThisBlogThis!Share to TwitterShare to FacebookShare to Pinterest
Labels: 1983, Andrew Davis, Horror, Slasher film, The Final Terror