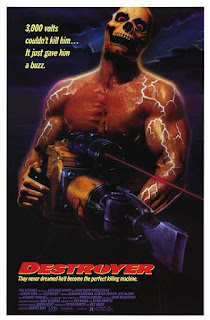 Robert Kirk's 1988 slasher film DESTROYER is equal parts PRISON and RETURN TO HORROR HIGH. It's a simple little tale. A film company is currently shooting their sleazy women in prison flick, Death House Dolls, in an abandoned penitentiary. Although everything looks pristine, the old jailhouse was the site of a riot, 1,000+ prisoners strong, only 18 months prior, a riot that occurred on the night serial rapist and murderer Ivan Moser was sentenced to die. Thanks to a faulty bit of wiring, the electric chair Moser was strapped into caused a blackout, locking the coppers and the prison staff in with the frenzied inmates. When the lights finally came on and the riot was contained, Moser's body was nowhere to be found.

We meet our bevy of stereotypical characters. Robert Edwards, the suffering director, and Sharon Fox, the bitter diva actress who pines for the earlier days of her career. There's Rewire, the hippie technician charged with pulling off the special effects, and Russell, the night watchman left in charge of the prison. Our leads are David, the screenwriter of the film, and Susan, his stunt woman girlfriend. As the film goes on and more and more people go missing, Susan begins to see messages scrawled in blood on the walls, all directed towards her. Whoever is behind the killings has a serious fixation on our stunt woman lead, a fixation that places David directly in harm's way.

And this is where the problems with DESTROYER begin. The film opens with Moser's execution and the beginning of the riot. After somehow surviving 200+ volts to the brain, Moser, a hulking wad of bug eyes and muscle, breaks out of his restraints, attacking the guards in the room, one of whom is revealed to be Susan. This is, of course, nothing more than a nightmare sequence, but it also seems to indicate some kind of connection, psychic or otherwise, between Moser and Susan. As the film progresses and the bloody messages begin to appear, this subtle psychic insinuation becomes more and more explicit, right down to the messages disappearing whenever Susan calls someone over to witness them. The film feels like it's building to some grand reveal, that maybe Susan and Moser share a past and that by killing Moser, his spirit is somehow free to assault her from beyond the grave.

But no, that isn't what the film is doing at all. Turns out, Moser isn't dead. He's simply been living in the prison for the past 18 months, helped and cared for by a secret accomplice, someone involved with the filming. So why exactly does the film ladle on the supernaturalism? Why exactly is Moser targeting Susan through all of this? As I've said, the film goes through a lot to establish some kind of unexplained connection between the two characters. It's a little bit frustrating that nothing ever comes of it, making much of the first half feel like little more than a lazy bit of bait-and-switch.

There are other unexplored or under explained bits of plot here too, like why the old warden of the prison feels threatened by David investigating the riot. Hell, even the riot itself is a bit confusing. 1,000 plus prisoners rampaged through the place, apparently causing enough damage and loss of life that they were… what? Transferred to another prison? Why? The place looks pretty much spotless, easily the most livable abandoned building in the history of abandoned buildings. The way the old warden reacts to David's questions about the riot and the way the townsfolk speak in hushed tones about the violence… Again, the film seems to promise something more, something a bit less natural than simple inmate violence, and again, it fails to ever deliver on that promise.

But enough about what DESTROYER doesn't do. What about the stuff that it does do? How does that turn out?

Well, believe it or not, DESTROYER is actually rather fun once it settles down into familiar slasher territory. Unfortunately, it requires quite a bit of patience on your part to get there. The film is virtually slasher trope free for the first 45 minutes. Thankfully, watching a sardonic Anthony Perkins direct a squawking Lannie Garrett makes the wait less torturous. The filmmaking sequences in the film are all great fun to watch, especially the scenes dealing with special effects, like the one in which an important stand-in mannequin accidentally melts when Rewire can't turn off the juice to the electric chair. Scenes like that highlight the aggravation and mishaps that come with independent, low budget filmmaking. As someone who has engaged in that sort of thing in the past, I found the filmmaking scenes in DESTROYER strangely cathartic, maybe even a little bit nostalgic.

As for the slasher film stuff, watching ex-NFL defensive end Lyle Alzado, smash, bludgeon and manhandle people is surprisingly fun. Alzado's performance as Moser is pretty damn far from subtle. There's a bit of Freddy in his performance, all one liners and exaggerated threats, and while I generally prefer my slasher villains to be a bit more on the serious side of the spectrum, Alzado's hyperbolic acting fits well within the cheesy world of the film. The violence is a major letdown though. I don't know whose decision it was to have the massacre of a handful of naked women take place off screen, but that person clearly doesn't know their audience very well. The bodies of those actresses are never found either. We don't see the execution or the aftermath. That should have been a set piece on the level of THE BURNING raft massacre. Instead, we only hear the sound recording of the killings, captured by the sound engineer's boom mic. Kind of a bummer.

But DESTROYER does go out with a bang (literally) and doesn't leave an unpleasant taste in your mouth, more than can be said for other cheap-o slasher movies made in the late 1980s. This isn't a groundbreaking work of art or even a particularly great horror movie. It's a pleasant diversion and a fun enough way to spend 90 minutes. If all you want is a decent time waster, DESTROYER won't disappoint, even if it will cause you moments of severe frustration along the way. I suppose that's the highest praise one can give a slasher film from the late 1980s.