RUN IF YOU CAN 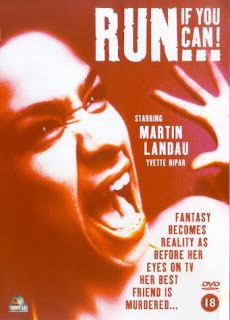 There’s a killer stalking the streets of Beverly Hills, leaving the naked corpses of beautiful women in trash bins all over town. So far, the unknown maniac has left eight bodies in his wake. What the killer doesn’t realize is that whenever they watch their homemade snuff movies of the murders, their video feed is being picked up by a satellite dish on the rooftop of a local Beverly Hills estate.

That estate is currently home to Kim, a pretty college student house sitting while the owners are out of town. Kim writes off these nightly bouts of shoddy murder as errant signals. The dish must be picking up some lurid horror movie on another channel. Despite the murders matching the MO of the nasty killings making headlines all over town, Kim writes this all off as little more than a nuisance. That is until her friend Jill makes an appearance on Snuff TV.

At first, the cops in charge of the case write Kim off as a wacko, just an over-sensitive girl mistaking horror movies for the real deal. Then they find Jill’s corpse (conveniently stuffed in the trunk of one of the cop’s cars). They attempt to rig Kim’s VCR so that she can record the video feed she’s been seeing every night. Unfortunately, pressing record scrambles the signal so Kim does the only thing she can think to do. She snaps some pictures of the TV screen. Thanks to a nosy asshole at the police station, word reaches the local press that Kim has been seeing these murders broadcast on her television. And just like that, the killer begins tracking down our heroine, eager to add her to the body count.

It’s an engaging premise, a little bit VIDEODROME, a little bit slasher movie. RUN IF YOU CAN milks that premise for all it’s worth and therein lies some of the problem. At 90 minutes, the film is too long, too meandering in its set-up. Jill, a character marked for death from the moment we catch a glimpse at her “too many men, too little time” bumper sticker, doesn’t shuffle off the mortal coil until 40 minutes into the film. The shift to stalk and slash thriller doesn’t occur until 20 minutes after that. The first 40 minutes are all set-up, just character moments like Kim talking with a slightly aggressive older teacher, Kim being creeped out by someone selling her shoes, Kim dealing with a mildly sleazy TV serviceman…

Those entire 40 minutes are set up solely so that we can grasp that every man in this film not played by Martin Landau or Jerry Van Dyke is a possible threat to women. In fact, the whole damn world itself seems threatening to women. Spooky music plays over innocuous scenes like Kim walking around a room, a satellite dish slowly panning to the right, or a car driving down the street. This attempt at creating a foreboding atmosphere just comes off as a great, big waste of time. After all, we have a young woman living alone and a serial killer on the loose. Had the film tied the two together earlier, it could have saved both of us a lot of time and energy. I’m sorry, but I just don’t find spooky music playing over scenes of busy city streets during rush hour to be an effective creation of tension.

Thankfully, when the film finally recognizes that its best, most untapped source of tension is Kim being stalked by a killer, RUN IF YOU CAN comes to life wonderfully. While it never escapes its low budget, made-for-TV feel (even though this film is definitely not something you would have ever seen on broadcast television thanks to its oftentimes brutal violence and penchant for bared breasts), the film does manage to be a nice, tight treat in its final third, culminating in at least two unexpected deaths and a skillful retread of the climactic confrontation in Hitchcock’s REAR WINDOW. But, and this is a big BUT, the final reveal was a little underwhelming for yours truly. When the mask was pulled off and the killer’s identity was revealed, I struggled to remember just who the hell this person was. After all, the killer made their appearance late in those first 40 minutes of the film and by the time they were introduced, I was genuinely struggling to keep my eyes on the screen.

The aforementioned Martin Landau and Jerry Van Dyke both turn in good performances here, as does Yvette Nipar in the role of Kim. Virginia Stone directs with a solid eye for detail. Everyone involved in the film takes the material quite seriously and that helps to make what is a rather cheap and sordid affair into a thriller with genuine ambition. Sure, the film stumbles thanks to a lack of money and an unfocused first 40 minutes, but I definitely wouldn’t call RUN IF YOU CAN a bad film or even a mediocre one. I quite liked the film once it stopped wasting time and I imagine that if Stone and Co. had a few more days and a few more duckets, RUN IF YOU CAN would be much more fondly remembered.

It has a hell of a premise, good performances and a final third that delivers everything you hoped for when you popped it into the VCR. There’s a lot of great stuff here. You just have to work for it.
Posted by David Grant at 11:32:00 PM
Email ThisBlogThis!Share to TwitterShare to FacebookShare to Pinterest
Labels: 1988, Horror, Jerry Van Dyke, Martin Landau, Run If You Can, snuff, Thriller, Virginia Stone