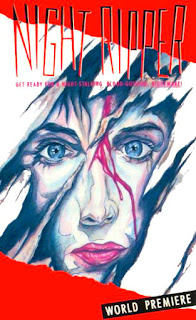 Here’s a tidbit of information about yours truly that you don’t know and probably don’t care to know. When the weather changes, I get sick. It happens all the time, almost without fail, and that’s pretty shitty, especially since the weather here in Bumblefuck, Pennsylvania has been fairly schizophrenic as of late. For the past two months, we would go from five days of 30s to two days of 50s to straight down to Siberia levels of wind chill. Three days of 60s gave way to a snow storm. All throughout the month, the weather would stabilize then stroke out. As a result, I spent much of mid-to-late December and early-to-mid January with night time sniffling, sneezing, coughing, aching, stuffy head, fever and couldn’t rest even with medicine.

As a result, I didn’t write very many reviews, mostly because it’s difficult to concentrate on writing complete sentences when snot won’t stop dripping down onto the keyboard. I did however watch a metric shit ton of movies, specifically shot-on-video slasher movies. I figured, I already feel bad so why not feel worse? And worse is exactly how I felt.

But as I was going over the list of films I had watched and checking them off on my “you’re wasting your life watching movies” Excel spreadsheet, I realized that a few had slipped through my sweaty, might-as-well-be-diseased fingers. Like this film, NIGHT RIPPER, a 1986 kinda-sorta giallo/slasher clusterfuck from director Jeff Hathcock. Hathcock is a director I’m quite familiar with. I also kind of fear the man. After all, he made VICTIMS, an absolutely abysmal film that, to my great shock, had a Blu-ray release not too long ago. I didn’t have high hopes for NIGHT RIPPER. Do you think the film exceeded my infinitesimal expectations?

NIGHT RIPPER is set in a world where everyone is cheating on their wife, fiance or significant other. It focuses largely on Dave, a soft-spoken chap with Eli Roth eyebrows, who runs a small photography studio with Mitch, a man we’re supposed to find creepy because he speaks very slowly and in monotone (Mitch is played by Larry Thomas, aka the Soup Nazi from Seinfeld, and yes, that never stops being distracting). There is a murderer wandering the streets, slicing up models, a few of whom just so happened to be patrons of Dave’s studio.

One day, a pretty European woman named Jill shows up at the studio eager to have some risque pictures taken for her boyfriend. Dave is immediately smitten and begins pursuing her romantically, which is kind of a dick move if you ask me because Dave is already engaged to a woman named Karen. We’re let off the ethical hook rather early on as it’s revealed that Karen is having regular trysts with a man twice her age and four times her weight. Tossed into all of this melodrama is Janet, a slightly sinister lesbian delivery woman with some rather unsavory views of models. After the Ripper claims his fourth victim, Dave and Mitch are questioned by the police. Despite the fact that Mitch answers every police question sarcastically and grins like an idiot every time the coppers mention “murder”, “death”, “blood”, “mutilation”, etc, the cops let them go. A little later, Karen ends up dead and the cops turn to Dave, for reasons unknown, to help them catch their culprit, all while Mitch and Janet circle around Jill like two hungry sharks.

NIGHT RIPPER is exactly the kind of film you think it is. Shot on what looks to be a commercially available home video camcorder, filled with terrible sound, questionable acting, and bad special effects, NIGHT RIPPER moves with the speed of a geriatric on downers. To the film’s credit, it keeps the cops off screen for the vast majority of the running time. I’ve said before in some review of some godawful piece of shit, shot-on-video slasher movie, that if you ever see cops in a film like this, run the fuck away. Cops in shot-on-video horror films don’t act like cops, don’t look like cops, don’t do cop stuff at all, and generally only exist to regurgitate information we already know. Oh, you’re going to tell us for five minutes that a woman was murdered last night? Well, thanks, assholes, I already saw that happen a scene or two ago. Thanks for wasting my time.

Not only does the film leave the cops out of this, it largely leaves Dave out of it too, which is odd because, well, he’s the lead character. The final confrontation in the film is a three way affair between every speaking character that isn’t Dave. He doesn’t get to reveal the killer or even have the killer reveal their identity to him. He shows up on the scene after the killer is already dead. What a goddamn hero!

The motive is just a generic “I hate models” cop-out with nothing else added in for flavor. The violence meted out is certainly bloody, but it’s not at all convincing. Most of the murders happen in single shots. We’ll see the knife coming down and then cut to a cheap effect of the blade sticking in someone’s face. Clearly, the special effects budget couldn’t support anything too elaborate. A knife is dragged across an already cut throat. A knife dragged across a woman’s skin leaves a bloody trail of grue, but doesn’t appear to actually break the skin. That sort of thing. Disappointing, but forgivable.

The highlight of the film is the way the killer dies. See, this isn’t called NIGHT RIPPER for no good reason. It ties, or at least tries to tie, itself to the infamous Jack the Ripper murders of 1888. The cops mention the mutilation of corpses (mutilation that we never see; in fact, we often see the killer leave the scene immediately after haphazardly stabbing their victims) and how the killer would have to have medical training to cause such elaborate wounds, just like the Ripper case. Mitch was once a butcher, a theory floated around for Jack the Ripper’s then-current or past profession. Of course, that means the models we see are, according to this film anyway, tantamount to prostitutes, a line of thinking that some might find distasteful.

During the final confrontation between everyone but our hero and the killer, the killer talks about mannequins being like the corpses they’ve been leaving behind. Hollow on the inside, mwahahahaha! AHEM In a moment I’m sure we’re supposed to find wonderfully ironic or woefully poetic, the killer gets their knife stuck in the hand of a mannequin as they tumble to the ground. The mannequin tips over, stabbing the killer to death. And thus the victims have risen from the dead to slay the beast and put their souls to rest.

It’s a dumb ending to a dumb movie, but I will admit that the absurdity of the ending did leave me with a smile rather than a pained grimace. In fact, there are some really unintentionally funny moments in the film, like how numerous scenes of phone calls end with the actors looking slightly confused at the contraption in their hand, almost as though they’ve been suddenly and inexplicably dumbstruck by 1980s telephone technology. A displeased loved informs her paramour that their frequent sex meet-ups are not love, rather they’re “...just sweaty bodies fucking under flood lamps!”. Clearly the film’s composer never got to finish the job as the creepy synth score sometimes gives way to bubbly elevator music.

Depending on your mood and taste for awful movies, you might get a chuckle or two out of NIGHT RIPPER. You certainly won’t find your hunger for wanton violence and sexual mayhem satisfied, nor will you be at all surprised by who turns out to be the killer. As far as Jeff Hathcock films go, I can’t say NIGHT RIPPER is the worst, but it isn’t going to convert anyone into a Hathcock devotee. It’s just a waste of time, shot-on-video shitter. It’s pretty damn bad, that’s for sure, but it ends with such a delightfully stupid final confrontation that I’m almost – ALMOST – willing to not throw my VHS copy into oncoming traffic.
Posted by David Grant at 1:33:00 AM
Email ThisBlogThis!Share to TwitterShare to FacebookShare to Pinterest
Labels: 1988, bad movie, Horror, Jeff Hathcock, Night Ripper, shot on video, slasher