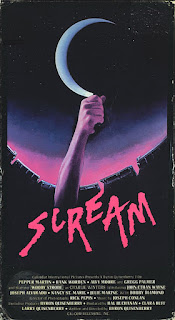 A dozen or so rafting weekend warriors meet sticky ends at the hands of an unseen, and quite possibly supernatural, killer in Byron Quisenberry’s 1981 slasher flick, SCREAM.

I imagine that made several of you perk right up. After all, it’s a well worn tale, one loved by many a horror fan. It’s the engine that powered everything from FRIDAY THE 13TH to DON’T GO IN THE WOODS. Exceedingly simple and, if performed well, extremely efficient, the potent mix of isolated, often unaware characters and bloodthirsty masked killer drove many films right up the box office charts. Truth be told, despite being one of the most over used narratives in all of horrordom, it probably has a gallon or two still left in the tank. It’s the kind of story that just never gets old or goes out of date.

However. getting it to work well can be rather tricky. The concept is sound and exciting, but if the execution of the concept is garbage, you’ll just be left with nothing more than a reminder of how well it had been executed a thousand or so times before. It’s so simple. It’s so easy. So when a movie fumbles it as badly as SCREAM does… well, you have to wonder just how in the hell a full creative team failed to grasp the most basic of all horror film premises.

Here we have a dozen or so characters, many of whom blend together into one fleshy blob of stale characterization. I finished watching the film about an hour ago and I can only remember a few names. There’s Bob, the cranky, chain smoking asshole and Laura, the only member of the group who is at all creeped out by the decrepit ghost town they will be calling home for the next day or so. There’s Ross and his co-worker Al, and Lou, the stumbling, bumbling coward everyone bullies because he’s, of course, developmentally challenged. That’s it. That’s all the names I can remember. Everyone else is just cannon fodder.

Shortly after settling down for the night, three members of the party die mysterious deaths. One of the group is found hanging. Two others are found slashed to death. Fingers are immediately pointed and arguments begin to break out. When the sun rises, they find their rafts have been destroyed. A couple of guys on motorbikes show up and one of the group leaves with them to find help. When night falls and the clock strikes midnight, several members of the group are attacked by the unseen killer. The arrival of a tall stranger on horseback might lend a clue as to who (or what) is responsible. The stranger’s name is Charlie and the tale he tells stretches credulity for everyone involved. Old Charlie is a huntin’ and his prey just so happens to be the vengeful, rampaging ghost of a long dead sea captain.

SCREAM is dull as dishwater, the result of a writer/director with an idea for a film, but no real clue as to how to flesh it out. Most of the film consists of characters sitting around inside a single room with nothing much to do other than wait for one of their friends to go wandering aimlessly in the dark. That isn’t an exaggeration or a lie. The majority of the film’s running time is spent watching characters do absolutely nothing. Sure, they tie a few cans to a piece of rope as an early warning system of sorts but that’s about it. Hell, most of the deaths could have been avoided completely were it not for characters having sudden and momentous lapses in logic. Characters only die because the screenplay dictates that, for no discernible reason, otherwise terrified characters suddenly and inexplicably lose every shred of their survival instincts.

Our characters are completely, 100% reactive characters. And that’s a major problem, not just for this movie in particular but for any movie. You need your characters to be proactive. You need the characters to attempt some kind of escape or take some kind of action that will help them overcome their problems. But the characters in SCREAM just stay sitting inside a run down home. They might bicker every now and then. Maybe someone will say something encouraging from time to time. But no one actively tries to escape. No one actively tries to catch the killer or even fight back when attacked. SCREAM has both the weakest and most useless batch of characters I’ve ever seen in a slasher film.

The easy listening synth soundtrack certainly doesn’t help the mood, and neither does the slow and methodical directing approach Quisenberry chose for the film. The camera is either stationary or it is SLOWWWWWLY panning or tracking. There is no pulse here, no rhythm to the editing. At times, I got the impression that Quisenberry wanted the film to have an artistic edge to it. It’s as if he purposefully sacrificed excitement and audience engagement in an attempt to make a more serious minded film. Well, it backfired tremendously. All his careful attempts at framing and composition mean jack shit if the audience isn’t awake to see them.

I also get the impression that Quisenberry wasn’t just focused on theatrical success, but desperately wanted his film to reach syndication on television. Despite our characters all being on edge, no one ever swears. “You can take your positive attitude and stuff it”, Bob says to Laura. And how does she respond to this sexist, obnoxious asshole? “Listen, Mister, you can just kiss off”. There’s stronger language in Hollywood films from the 1950s.

No blood is ever shown during the multiple murder set pieces and almost all of the violence occurs off screen. There’s no sex, no nudity, no fist fights, no nothing. Absolutely nothing that would offend television censors exists in this film. If it weren’t for the fact that I know SCREAM played in theaters, I would have sworn that this was a made-for-television movie.

Now I’m not suggesting that a film needs viscera, nudity and fisticuffs to be worth watching. That’s simply not true. But their absence is notable when it comes to slasher movies. Even HALLOWEEN flashed a few breasts. So why should anyone watch this film? It’s missing the visual thrills, the bare flesh and spilled blood. It’s missing the proactive and likable characters that usually populate films of this kind. It has no forward momentum, nothing even remotely resembling a heartbeat. We don’t even get a concrete answer as to who was doing the killing. I think we’re supposed to believe that all these men and women were murdered by a ghost, but the film is so poorly put together that I couldn’t quite wrap my head around what the film was trying to say.

So again, I ask, why should anyone watch this film? I’m genuinely sorry, Dear Reader, but I can’t answer that question. There simply isn’t a reason why anyone should ever watch this film.