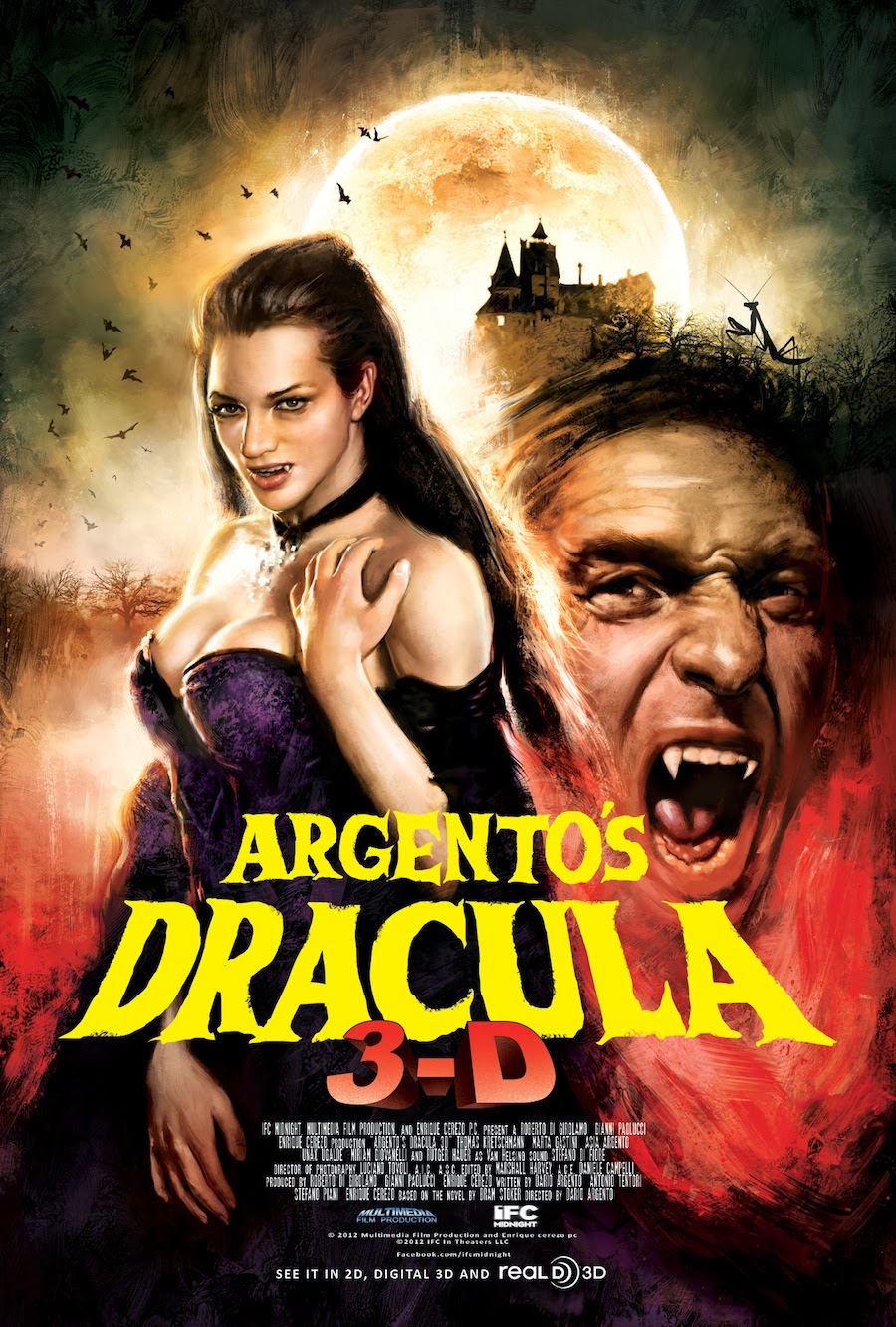 There are many ways I could write this review. I could, for example, spend whole paragraphs bemoaning the fall from grace that the once great Dario Argento has succumbed to over the years. I could walk the tightrope of apologetics, claiming that it isn’t Argento that has lost his touch but the Italian genre industry, that films as brave as THE BIRD WITH THE CRYSTAL PLUMAGE simply are not targeted for the kind of mass appeal dictated by the more commercially minded Italian executives of today. I could claim that the film is simply some kind of mistaken masterwork, that it is not meant to be taken seriously in any respect. That is to say, by trashing the film we are simply missing out on what the film really has to offer. That might be reaching a bit too far but there is some truth in those other statements, some valid points to make. I'll touch on a few of them later but for now, how about an opinion and a little bit of history?

Full disclosure: I am pretty much done with Dracula at this point. It’s hard to imagine a time when there wasn’t some variation or direct adaptation of Bram Stoker’s tale in the cinemas. Murnau’s NOSFERATU was the first to arrive back in 1922 followed by the Universal adaptation in 1931. Throughout the decade, Dracula would become a franchise, spawning no less than four installments. Hammer came along in 1958 with their more serious (and infinitely superior) adaptation. Again, Dracula would form the backbone of a franchise, this time upping the number of installments to eight. As the Hammer franchise was picking up steam, numerous adaptations were made around the globe, including DRAKULA ISTANBUL’DA, a Turkish production, a Western-horror turd called BILLY THE KID VS. DRACULA, a teenage rebellion flick from Herman Cohen called THE BLOOD OF DRACULA, a bizarre modern day interpretation from the UK called THE FANTASTIC DISAPPEARING MAN, a low budget shocker from Al Adamson titled BLOOD OF DRACULA’S CASTLE, a typically shoddy adaptation from Jess Franco, a camp comedy from Roman Polanski and many, many others.

By the time the inevitable blaxploitation adaptation came around in 1972, there wasn’t much left to do with the story. But that didn’t stop people from trying. We had TV-miniseries about Dracula, hardcore gay sex flicks about Dracula, family films about Dracula… Hell, in 1979 alone we had three adaptations all come out within eight months of each other: the Frank Langella-headlined adaptation, the pitiful spoof LOVE AT FIRST BITE and Werner Herzog’s remake of NOSFERATU. The 1980s were thankfully a bit less Dracula heavy, not something that can be said of the late 90s up until the present day. Since 1992 we’ve had Coppola’s adaptation, the Mel Brooks romp, DRACULA: DEAD AND LOVING IT, the godawful DRACULA 2000 franchise, the meta-horror of SHADOW OF THE VAMPIRE, yet another Jess Franco adaptation, the wonderful Guy Maddin ballet film DRACULA: PAGES FROM A VIRGIN’S DIARY, a new BBC television adaptation… They just keep coming. And really, what the hell is the point? We’ve had monstrous Draculas, emo Draculas, funny Draculas, porno moustache-wearing Draculas, misunderstood Draculas, reluctant Draculas, sappy romantic Draculas… Every flavor of Dracula has been brought to market in every possible variation of story, theme, setting, time period, etc. etc. etc.

So the idea of watching a new Dracula adaptation was not something I was looking forward to. Knowing that it was an Argento film made me even more reluctant to watch it. To go back to one of my opening points, the Argento of today does not resemble the Argento of yesterday. The last truly inspired piece of filmmaking Argento made was back in the late 1980s. OPERA represented the ultimate culmination of everything the Argento name used to signify. Graphic violence, black humor, sweeping, masturbatory camera work, a pounding synth score, inexplicable lapses in narrative logic and a barely there story that only makes sense within the diegetic world of the film. Argento would spend his next two films trying to break into the American market. Both of those films, TRAUMA and TWO EVIL EYES, failed miserably. But then Argento made THE STENDHAL SYNDROME, a meta-giallo well ahead of its time and easily one of the most overlooked gems in his entire filmography. For the first time in half a decade, it felt like Argento was back on track. His next giallo, SLEEPLESS, was, in every way, classic Argento. Everything was in its place again. The driving score, the brutality, the pretzel-like narrative, the chiaroscuro lighting, the fluid camera work… It is the best of Argento’s contemporary efforts but its glory would be short lived. The film did not make much of a mark. What was left of the giallo during the 1990s had been assimilated into the North American sex thrillers that flooded the market place and sometimes graced the big screen, the best example being Verhoeven’s BASIC INSTINCT. The giallo he helped to create was gone and his next two films, THE CARD PLAYER and DO YOU LIKE HITCHCOCK? felt like direct acknowledgments of that fact. They are stale and dull looking films, built around barely serviceable plots. They were not, as his Animal Trilogy was, artistic endeavors. Argento had become yet another “for the money” filmmaker.

The less said about MOTHER OF TEARS and GIALLO the better. The only thing I can say is that the DRACULA feels like a desperate attempt to make up for those failures. MOTHER OF TEARS was a desperate attempt to regain some level of fanbase support. GIALLO, with Hollywood heavy Adrien Brody in the lead role(s), was an attempt to regain some kind of directorial authority. Neither was successful. MOTHER OF TEARS was rejected by a majority of fans and GIALLO became a legal nightmare, one that eventually led Argento to disown the film entirely.

And that brings us here. Dracula is, in every way, an old man’s tale. It feels dated and tired. It is so familiar to us that nothing can really make it exciting again. However, it’s an incredibly safe bet. It’s one of those stories that people like to hear over and over again, despite having heard it a billion times. I can imagine Argento feeling quite secure in his choice to make this film. It’s a familiar, routine story (thus negating the need to do much work) but one that everyone loves. For a director fighting to retain some standing in the genre world, filming a well-loved story probably seemed like a safe bet. And, in the hands of virtually every other filmmaker, it would have been. How Argento fucked it up so bad is beyond me.

Let’s start with the look of the film. Close your eyes and imagine what a Dracula film should look like. Are you thinking heavy atmosphere? Gothic cathedrals and castles covered in cobwebs and shadows? Buxom, bodiced ladies slinking through dark corridors by candlelight? Those are the typical Dracula bits of filmmaking. None of that will be found here. In Argento’s world, everything is brightly lit and heavy on the artifice. Every set looks fake, every bit of decoration seems chosen at random from a box of left over dinner theater props, costumes range from period-appropriate to contemporary. It doesn’t look like Argento ever got around to sending the film in for color correction. Even the ghastly MOTHER OF TEARS managed to create atmosphere. But DRACULA looks plastic and fake. Because the majority of it IS plastic and fake.

Then there’s the score, a theremin-heavy clusterfuck that sounds like the soundtrack for a cheap, FMV-filled Sega CD game. Then there’s the completely inappropriate dubbing, the way the camera always seems to begin the scene by pushing in, the disregard for any kind of continuity in setting, the way the film just doesn’t bother to clue you in on the geography of the surroundings, the overly languid pacing, the fact that all the vampires hiss constantly throughout the entire goddamn film and the terrible CGI that figures in almost every single scene. THE STENDHAL SYNDROME was one of the first (if not THE first) Italian genre film to utilize computer generated effects. As you can imagine, the results were not top notch. The level of effects work here barely rises to the level of a Syfy movie. CGI spiders, CGI tiny Draculas scurrying up CGI walls, CGI skylines, CGI buildings, CGI streets, CGI fingernails, CGI fangs, CGI bullets, CGI fire, CGI insects, CGI animals, CGI blood, CGI teleporting vampires, CGI disintegrating vampires, CGI this, CGI that, CGI here, CGI there, CGI everywhere. And it is absolutely dreadful. The film does manage to whip out the practical effects from time to time and when it does, DRACULA becomes a bit more enjoyable.

And don’t get me wrong. I think a lot of people will in fact find this movie enjoyable. I’ve spoken to people who do enjoy this film. I won’t begrudge them their opinion but I want to make one thing clear. There is a difference between “camp” and “unintentionally comedic”. There is nothing in DRACULA to even suggest that Argento set out to make a camp horror film. Everything is played incredibly straight. Even when the film descends into total stupidity (ie. the infamous praying mantis scene) it does so with a straight face. But yet people keep telling me that this film is meant to be campy, that Argento was no more serious with this film than Paul Morrissey was with BLOOD FOR DRACULA. I call bullshit on that. Yet people will say “of course it’s bad! It’s meant to be bad!” Well, why is that a good thing? Why would anyone want to watch a film designed to be bad? Why waste your time? If that’s the best argument you can make for this film, your argument stinks.

So is there anything that DRACULA does well? Not really. If the best thing I can say about your film is that the actresses are all attractive, chances are your film is really terrible. But at least it isn’t painful. I suppose it has that going for it. I’ve seen a lot of terrible movies in my time, movies that have literally made me scream out loud. This isn’t that level of terrible. And while I don’t ever want to fall into the trap of comparing “new” Argento to “old” Argento, I cannot help but look at this film and think “Dario Argento, Thomas Kretschmann and Asia Argento once teamed up to make THE STENDHAL SYNDROME and now they’re making this”. I cannot help but think “Luciano Tovoli once did the cinematography for SUSPIRIA and TENEBRE, and now he’s making this”. I can’t help it. I cannot get it out of my mind. With each new Argento film, his genius seems to fade. So despite all the facepalming, groaning and laughing I did while watching DRACULA, when it was over all I felt was profound sadness.

Posted by David Grant at 1:59:00 AM
Email ThisBlogThis!Share to TwitterShare to FacebookShare to Pinterest
Labels: Dario Argento, Dracula 3D