FRIDAY THE 13TH: THE FINAL CHAPTER 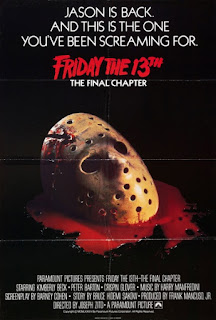 Describing the plot is almost pointless. Picking up right where FRIDAY THE 13TH, PART III ended, this so-called Final Chapter finds Jason reviving and killing his way out of the county morgue, eventually returning to Crystal lake to eviscerate and obliterate a handful of college age kids, and the remnants of a broken family living across the road. There's a minor subplot about a victim's brother roaming the woods looking for his sister's killer tossed in for a bit of variety, but the rest is pure slasher film, no different than anything you've seen before, just done here with a kind of ideological purity.

It's a no fuss, no muss film, one that never tries to apologize for its inconsistencies and ridiculousness. All the trademark elements of these films, the bits and pieces that were held up against them by the moral majority and the media watchdog groups… Well, those elements are what the film revels in the most. This film is rife with sex and death, revenge and terror. It contains a Jason at his most primal and presents us with some truly gruesome moments of bodily destruction (and censors be damned, the violence on display still has quite an impact). So it's with a bit of confusion that I have to type the following sentence:

Because that is NOT an element usually found in slasher films. For example, FRIDAY THE 13TH: THE FINAL CHAPTER contains one of the most tender and touching romances in the history of the slasher film. The budding romance between the virginal Sara and pretty boy Doug is surprisingly sweet. And as for the rest of the gang, they all feel like actual 20-somethings. They talk about sex, poke fun at one another, have petty jealousies and personal inadequacies. Hell, even Mrs. Jarvis, the divorced single mom raising her two kids in almost isolation, is given attention here. There's a moment when her children, the teenaged Trish and her little brother Tommy, meet the kids next door. The mother watches them from the window, slowly turning away in a kind of sad resignation, an understanding that, for the first time, she might be spending time all by herself at home as her kids go be kids.

Now don't get me wrong, the film never once treats these otherwise unique characters differently. They're still pummeled, stabbed, thrown from windows, axed and impaled with glee. In most teen films of the 1980s, young love is rewarded. Here, Romeo has his face crushed against the bathroom wall. That hasn't changed one bit, but a film like this is infinitely more terrifying and traumatic when we have actual characters to root for, not just a parade of well endowed, pretty bowling pins waiting to be knocked over.

And of course, this movie has its fair share of stupid shit like how an inflatable raft can stay inflated after a hockey masked killer sticks a knife through it. During the final chase, Trish opens the front door of the cabin only to find a dead body on the porch. Instead of jumping or merely walking over it, she backtracks through the entire house to climb out the kitchen window. The sequence of murders doesn't make sense either, with Jason killing one kid in the kitchen before climbing up the roof to throw one of the Doublemint Twins to her death, only to then return to the kitchen to get a knife. Even worse, Jason once again falls prey to the same kind of idiotic psychology tricks that got him cleaved through the collarbone less than 48 hours ago. As for the ending, not only could Tommy not have hit Jason in the face with the machete at that angle, I doubt he could have swung the blade with enough force to ever crack a skull in the first place.

But honesty, who cares? I nitpick because these films are as familiar to me as my own home. I have seen each of these films over and over again during my life. Hell, FRIDAY THE 13TH: THE FINAL CHAPTER was the first film in the franchise that I ever saw in theaters. I sat at the tender age of five years old with my mom and watched this film on the big screen. I didn't care about plot holes. I cared about the scares. Here I was watching a movie in which a kid (imagine that, finally a kid in a movie franchise that takes place at a Summer camp) was chased by Jason. That alone made my little brain go crazy. I was terrified by this movie. It really did a number on me.

But that was ages ago. I'm 38 years old now. These films don't work the same for me now as they did then. Familiarity has reduced them to nuts and bolts, and I see the seams and the plot holes and the nonsense and the cheap glue holding them together. I cannot go back to a time when these films were more than simplistic greed machines. They have lost their luster and their ability to frighten. And though I no longer have the same kind of appreciation for the FRIDAY THE 13TH films as I did when I was a teenager, I'm all for giving credit where credit is due. So allow me to conclude with the following statement:

FRIDAY THE 13TH: THE FINAL CHAPTER might not be a great film, but it is one hell of a slasher film.