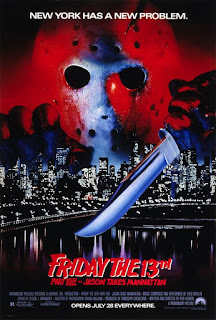 FRIDAY THE 13TH, PART VIII: JASON TAKES MANHATTAN was dead on arrival. It had been gutted by Paramount before filming ever started, neutered by the MPAA once post-production completed and was greeted with very little fan enthusiasm upon release. It would be the last of the Paramount produced FRIDAY THE 13TH films, released nearly a decade after the original. For many fans, the series had run its course. What director Rob Hedden offered up in 1989 seemed like a less than satisfactory diversion after the Jason versus Carrie theatrics of FRIDAY THE 13TH, PART VII: THE NEW BLOOD a year earlier. A more traditional sequel was simply not enough to attract much attention.

Even the promised romp through the streets of New York failed to raise eyebrows. For the few who were excited by the gimmick, watching the film was an exercise in frustration. Nearly two-thirds of the running time takes place on a boat. When we finally arrive in New York, we're confined to back alleys, nondescript abandoned buildings and sewer tunnels. The meager budget for the film simply would not allow for more than a handful of shots to be filmed in New York. Vancouver would be used instead and anyone with even a passing familiarity with New York City could see the seams. It was a pale imitation of a great city, much in same way that FRIDAY THE 13TH, PART VIII: JASON TAKES MANHATTAN was a pale imitation of a decent franchise entry.

The film looks cheap. The soundtrack is little more than reused cues and themes from the soon-to-be defunct Friday the 13th: The Series. Everything is bland and plastic. In an attempt to capture some of the visual imagination of the A NIGHTMARE ON ELM STREET franchise, awkward hallucination sequences pop up out of the blue, shredding any sense of reality this terrible film had to offer. Worse, it spit in the face of every franchise fan out there, offering up the single worst finale ever filmed for the franchise, a mind-bogglingly idiotic capper to a craptastic and tired exercise in audience exploitation.

Let's dig our fingers deeper into this turd, shall we?

The film begins like these films all begin. Jason is resurrected and offs a couple of unaware teenagers. From there, we meet Rennie and her English teacher, Mrs. Van Deusen. They have arrived at the pier, anxious to board the good ship Lazarus, a cruise vessel that will be carrying the entire graduating class of a local high school (all 15 or 16 of them) to New York City. Rennie is hassled a bit by her guardian, Charles, also a teacher at the high school. Charles didn't want Rennie coming along for the journey, anxious that her past trauma would be compounded by a trip on board a boat. You see, when Rennie was just a child, Charles pushed her overboard into the waters of Crystal Lake in an attempt to expedite her swimming lessons. Rennie was then pulled underwater by a young Jason and nearly drowned.

Rennie has a boyfriend named Sean, the son of the cruise ship captain, a man who acts like he's the captain of the goddamn Bismarck. Sean's dad wants him to grow up to be a captain, but Sean really just wants to mope about and awkwardly kiss his girlfriend. Other students aboard the ship include Tamara, a cocaine-sniffing prude, Wayne, the camcorder-carrying nerd, J.J., the hair metal wannabe, and Julius, the 90 pound boxer. Not that any of these characters really matter. The film does absolutely nothing with them, rarely having them interact with one another, let alone develop individual personalities.

They only exist so that Jason can have someone to kill when he stealthily creeps aboard the ship. As the Lazarus sails from Crystal Lake (don't ask me how it got into Crystal Lake to begin with) to New York, Jason starts wiping people out, eventually forcing a handful of survivors to abandon ship in the middle of a storm. With about 20 minutes left in the film, our heroes finally row their life boat to the New York City pier, unaware that Jason has apparently been swimming behind them the entire time.

Now, I would like to talk about a few very specific things.

First off, Rennie. Rennie is a very special character. I don't know else to put it. She might even be a mutant or something like that. I don't know how else to explain the fact that Rennie has managed to stay so young for so many years. I mean, Jason drowned in 1957 and it's child Jason that attempted to drown Rennie when she was about 10 years old. So clearly Rennie, who is 17 in this film, has been aging maybe one year for every three years she's been...

Nah, they just fucked up. And it's a pretty astounding fuck up that makes literally no sense. Is Jason supposed to be the same age as Rennie in this film's universe? That can't possibly be as the legend of Jason, told by one of the characters in the film, has him killing people for decades. So how is it that child Jason attacked her all those years back? And why does she seem to have psychic powers? She keeps having hallucinations of Jason, hallucinations that just so happen to start when Jason boards the ship and coincide with his killings. Was this an attempt at recapturing some of the old Tina magic from FRIDAY THE 13TH, PART VII: THE NEW BLOOD? Or did Hedden catch a re-run of HALLOWEEN 5: THE REVENGE OF MICHAEL MYERS on cable one night and think “what a great idea!”?

Beats me. It makes zero sense. In fact, it almost makes as much sense as Jason does in this film. And that's my second point of conversation, the fact that Jason isn't just invincible in this film, he's goddamn magic. There's always been a point of contention between fans of slasher films and people who would prefer movies to operate under the real world laws of physics. Slasher movie villains seem to be able to walk without making a sound, are able to go unnoticed even if they're only standing a few feet away from a character, and, most importantly, are able to move great distances without running. This is a staple convention of the slasher movie, one born from nightmare logic. No matter how fast you run, you will never be able to get away from the monster chasing you.

But FRIDAY THE 13TH, PART VIII: JASON TAKES MANHATTAN goes wayyyy the fuck overboard with this idea. At one point in the film, a student named Eva finds herself trapped in a ballroom by Jason. She tries turning to the left, but he's standing in the doorway. She tries turning right, he's standing in the other doorway. She turns around, but he's right behind her. He's like a gooey, rotting Kurt Wagner in a hockey mask. It is profoundly absurd. Even worse is the horrible, terrible, dreadful, godawful look they gave him in this film. It's like he's soaked in K-Y Jelly. When Jason first boards the ship after being resurrected, the sound his hand makes when it grips the railing on the boat sounds like a wet fart. When he's finally unmasked, he has the appearance of a poorly carved Jack-o'-lantern. I can live with the fact that Hedden gave Jason a few overtly comedic moments in the film, but man oh man, this might just be the least threatening Jason in the entire franchise.

Lastly, let's talk about New York City. Or rather, this films version of New York City. In terms of cynical representation, this might very well be the single most caustic and poisonous representation of New York City ever captured on celluloid. It makes TAXI DRIVER look like a Saturday morning cartoon. Frank Zito would have been scared off by this place. The Big Apple of this film is an endless parade of filth, rats, drums full of sewage, hookers, druggies, gangs, muggers, flashers, pimps and pricks. Within five minutes of climbing up onto the pier, Rennie is kidnapped by gang members, forcefully injected with heroin and threatened with rape. When this film began its advertising campaign, one of the posters featured a bloody Jason bursting through the heart on one of those I <3 New York posters. The New York City Board of Tourism complained about the poster, thinking it was an inappropriate image.

I wonder how they felt once they saw the movie?

This film is just loaded with stupid shit. Did they really think people would buy the idea that every night at midnight the sewers of New York City are flooded with toxic waste? Did they honestly think that people wouldn't be able to tell Vancouver from New York City? When Rennie and Co. run across a NYPD cop, he's the most obviously Canadian cop in all of New York City. Moreover, why the fuck would anyone need or want to take a cruise ship from New Jersey to New York? Not only would it be the shortest cruise of all time, but who is paying for that extravagance? You can drop 30 bucks on a Greyhound ticket and get there in less than an hour. When our hapless stooges decide to abandon ship, there's a good five minute chunk of the film in which our characters all act like they're starving and desperate. The air gets all foggy and the mood gets all dour, like we're watching a middle school theater rendition of VALHALLA RISING. Oh god, the struggle for survival, sitting in a lifeboat a half mile off shore. Will we ever make it?

Why didn't Jason just telefrag the lot of them right then and there? He could have just teleported next to them, tipped the boat and badda bing! End credits. But then we wouldn't get to see Jason being submerged in toxic waste, turning him back into a small, dead child. Yes, that happens here. That is the great, grand finale of this shit heap. I guess Ginny was right. Jason was just "a child trapped in a man's body”. And then finally, after we all get over the shock of that stupid ending, Sean and Rennie go wandering the streets of New York City at night. The screen goes dark and the credits begin to roll as a cheesy 80s rock track plays over the speakers. We all get up from our seats, heading back down the aisles and through the doors. We leave the theater and hop into our cars, driving home, safe in the knowledge that Rennie and Sean made it through the nightmare alive.

Even though they were probably killed by drugged out gang members ten minutes later because Jesus Christ is New York City a scary son of a bitch.
Posted by David Grant at 11:54:00 PM
Email ThisBlogThis!Share to TwitterShare to FacebookShare to Pinterest
Labels: Friday the 13th Part 8, Horror, Jason Takes Manhattan, slasher