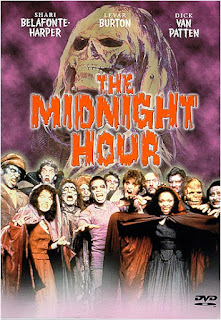 These days, talk of made-for-TV genre films usually revolves around whatever dreck the Syfy Channel has shit out that month, but there was a time not too long ago that you could find some genuinely chilling stuff in the made-for-TV market. TRILOGY OF TERROR, DARK NIGHT OF THE SCARECROW, SALEM'S LOT and WHEN MICHAEL CALLS are just a few examples of the really good ones. Hell, even the less than stellar stuff, like FROM THE DEAD OF NIGHT and GARGOYLES, put many of today's made-for-TV offerings to shame. Whether or not THE MIDNIGHT HOUR, an early effort from prolific TV director Jack Bender, belongs to the “great” or “less than stellar” category is definitely up for debate. In terms of chills and thrills, it barely registers. But criticizing it for its lack of traumatic shocks is to criticize it poorly. THE MIDNIGHT HOUR isn't out to scare you. It just wants you to love it.

Simply put, the film is a Halloween flavored gob of sugary goodness. Like NIGHT OF THE CREEPS, its main focus is on being entertaining, playing with tropes and cliches along the way. It tells the tale of a handful of high school kids (Phil, the preppy son of the town dentist, his love interest Mary, Mary's friend Melissa and her boyfriend Vinnie, and the school jock Mitch) who inadvertently raise the dead while prepping for a Halloween party. See, the town of Pitchford Cove has a long and troubled history with witches, chief among them the vampiric Lucinda, great, great, etc. grandmother of Melissa. Just before she was hanged by the town Witchfinder General (who is coincidentally Phil's great, great etc. grandfather), Lucinda put a curse on the town. When that curse is accidentally carried out by the kids, demons and zombies emerge from the cemetery, laying waste to the place.

Well, some of the zombies and demons lay waste to the place. The rest head on over to Melissa's house where they are mistaken for costumed party goers. As the zombies make out on the couches and demons slurp punch right from the bowl, Lucinda herself makes an appearance, slowly changing everyone in sight into vampires. Disappointed that Mary likes beefcake Rick more than she likes him, Phil takes off well before the carnage breaks out. He spots a lovely lass on the side of the road decked out in a cheerleader outfit. This is Sandy, a beautiful blonde who just so happens to be a zombie. Sandy has had a rough few hours. Not only did she crawl out of a grave, the malt shop, lookout point and even her old house are all gone, erased by the decades since she passed. Sandy and Phil hang out together, cruising around and flirting, before falling in love. Once the realization sets in about what is going on in town, Sandy and Phil rush to find a solution, even if putting things back to normal means that Sandy will be returned to her lonely grave.

So first thing's first: this movie is cornier than cow shit. From the ridiculous zombies, the half-assed werewolf that unconvincingly mauls a rent-a-cop, Sandy's constant use of the word “hep”, and an impromptu musical number that looks like it was planned as a cheap bit of MTV advertising, it's difficult to really take the film seriously. Again, if you want thrills and chills, definitely look elsewhere. But I'll be unconvincingly mauled by a half-assed werewolf if this film isn't charming as all hell. Watching our cast of good looking 20-somethings strolling through a patently fake graveyard while Wilson Pickett's The Midnight Hour plays on the soundtrack… it's just great stuff. It's the kind of stuff that just makes you wish tomorrow was Halloween and you, ya know, had friends to celebrate it with.

And then there's the Sandy and Phil Show. Heaven help me, I liked those characters. A lot. I liked their romance. I liked the fact that Sandy is pushy as hell despite her sweet demeanor. I liked that Phil is about as useless an asshole on your elbow. I liked their cutesy little flirtations. I liked literally everything about it, so much so that I wished there was more of Sandy and Phil just cruising around town and less of the whole vampire/zombie apocalypse thing. The dramatic push of the film, the fact that ridding the town of the curse means that Sandy will go with it, gives the film a much needed emotional boost. The climax is all kinds of sad as a result. And when was the last time you honestly felt moved by the climax of a made-for-TV genre movie? I know several times my bowels were moved by them, but I never felt genuinely bummed out by one before. Such is the power of likeable characters.

Oh, did I not mention the cast of this film? Shari Belafonte, LeVar Burton, Peter DeLuise, Lee Montgomery, Kevin McCarthy, Dick Van Patten, Kurtwood Smith, Dedee Pfeiffer and Cindy Morgan all in one film? Did I die and go to heaven? The soundtrack alone is worth the cost of admittance. The Smiths rubbing shoulders with Sam the Sham and The Pharaohs? Sign me up.

In summary, THE MIDNIGHT HOUR is indefensible as a straight-up horror movie. It just doesn't play that game at all. But if you're the kind of person that loves spending your evenings with a nice plate of cheese and corn, and definitely if you're the kind of person who sighs blissfully at the thought of tomorrow being the first of October, THE MIDNIGHT HOUR will likely tickle your happy places in all the right ways. It's dumb, wonderfully dumb, on top of being playful, fun and yes, even a bit sentimental. I personally think it's one of the made-for-TV greats.
Posted by David Grant at 9:05:00 PM
Email ThisBlogThis!Share to TwitterShare to FacebookShare to Pinterest
Labels: Comedy, Horror, Made-For-TV, The Midnight Hour