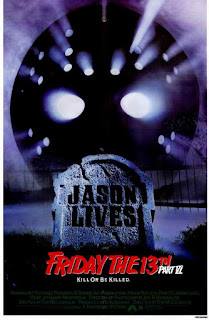 Given enough time, every movie franchise will collapse into self parody. In his role as writer/director, Tom McLoughlin decided to beat groaning irrelevancy to the punch and create JASON LIVES: FRIDAY THE 13TH, PART VI. With the mean spirited and sour taste of the prior sequel still in everyone's mouth, McLoughlin decided to craft a film that is steeped in irony and self awareness, trading the callous misanthropy of the previous films for a more lighthearted, humorous tone.

It's a shift that could have easily caused the entire fabric of the franchise to unravel. These films were exercises in graphic, cruel T&A bloodletting, after all. Changing the emphasis would seem counter intuitive, if not wholly destructive. Turns out, the single most surprising thing about JASON LIVES: FRIDAY THE 13TH, PART VI is just how well this new suit fits the bloated corpse of the franchise.

Like FRANKENSTEIN, the movie begins in an obviously fake graveyard. Into the scene comes two grave robbers, one of whom just so happens to be Tommy Jarvis, freshly released from whatever mental institution they stuck him in after the events of FRIDAY THE 13TH, PART V: A NEW BEGINNING. But Tommy and his friend are not here to steal a corpse. They're here to burn one and as a storm threatens to break out overhead, they begin digging up the grave of Jason Voorhees. Upon seeing the maggot-covered corpse of his tormentor, Tommy loses control, stabbing the wormy carcass repeatedly with a piece of metal ripped from a fence. Completing the FRANKENSTEIN homage, down comes the lightning, striking the monster, giving it life.

With Jason up and wandering around, Tommy turns to the local police. Unfortunately, they're assholes, especially Sheriff Garris, a trigger happy hard-ass with a hot daughter named Megan. As Jason cuts a bloody swath through the camp grounds, Tommy desperately tries to convince the police that his old nemesis has returned. For all his trouble, Tommy is sent packing, kicked out of town and warned not to return. Believing that the only way to stop Jason is to return him to the bottom of Crystal Lake, Tommy recruits Megan to help him bring an end to Jason's killing spree.

If anything, JASON LIVES: FRIDAY THE 13TH, PART VI ups the tempo compared to previous entries. It most certainly ups the scope. In addition to the stalking and slashing bits necessary for the film to operate like a FRIDAY THE 13TH film, we have Tommy, an actual involved protagonist, to follow. We usually don't see a lead character in a slasher become involved in the narrative action until the final third of the film, once all the dead friends are found and the film becomes a mano a mano fight to the death. Here, Tommy is actively involved and as a result, we have something dramatic to pull the film forward instead of just an increasing body count tally. There's also the police, a group often neglected by slasher films. Garris begins the film incredulous of Tommy's story then becomes increasingly suspicious of Tommy's true motives once the first bodies are found. By the time the final third arrives, they're yet another group determined to stop the slaughter.

For a FRIDAY THE 13TH film, that's a very busy narrative and while it means that the staple stalk/slash set pieces are pushed to the side a bit, the net result is a film that feels far more satisfying and interesting than virtually any other entry in the franchise. Sure, the humor on display can get a bit cornball (an old man finishes off a bottle of whiskey by softly telling it that it “will be the death of me” before unceremoniously having said bottle shoved into his throat; a kid asks his friend ”what did you want to be when you grew up?' as they hide from Jason; we see a young girl lying in bed sleeping, a copy of Sartre's No Exit tucked under her arm) and as the film goes on the jokes tend to clash with the increasingly more serious tone, but the narrative moves so quickly and so assuredly that everything just falls into place.

JASON LIVES: FRIDAY THE 13TH, PART VI is a joy ride. It's a cartoon, albeit a bloody one. It winks at the camera, it revels in its own formula and tropes. It does the self aware, meta-horror thing better than most pretentious horror oddities and it does it all without ever really betraying the franchise it sprung from. And of course it has problems and shortcomings, and I could spend three paragraphs pointing them all out if I wanted to, but the film, much like JASON X, is so damn entertaining to watch that I honestly couldn't care less about a single one of them. After sitting through round after round of nasty, bitter destruction for the sake of nasty, bitter destruction, JASON LIVES: FRIDAY THE 13TH, PART IV is like a breath of fresh air.
Posted by David Grant at 10:54:00 PM
Email ThisBlogThis!Share to TwitterShare to FacebookShare to Pinterest
Labels: Friday the 13th Part 6, Horror, Jason Lives, Slasher film