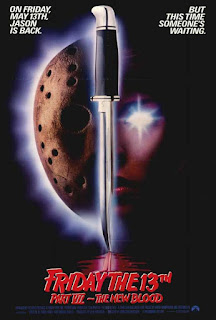 FRIDAY THE 13TH, PART VII: THE NEW BLOOD is a mixed bag. On one hand, you have the single most gnarly looking Jason in the entirety of the franchise, just a wonderful visual presentation of the character. On the other hand, you have everything else.

OK, OK, I'll admit that it is quite a bit of cheesy fun to watch telekinetic Tina psychically fling severed heads at Jason, but those moments come at the end of a long, hard slog of a film. Barring FRIDAY THE 13TH, PART V: A NEW BEGINNING, this was the entry hit hardest by the MPAA, so unfortunately all the sloppy, gooey gore effects were left on the cutting room floor. Maybe if the head crushing and entrail spilling were left intact, there would be something to recommend here. Alas, the absence of the gore makes the tedious first two thirds of the film into 60 solid minutes of torture.

The film begins with yet another recap of the entire franchise, as if anyone going to see FRIDAY THE 13TH, PART VII would not have seen any of the previous films. Jason is still at the bottom of the lake, his neck wrapped in chains. That's where Tommy Jarvis left him in the previous film. But a quick look around at the camp reveals that this film is taking place well over a decade in the future, probably sometime in the early 2000s. I already complained about that in a previous review so I'll just turn a blind eye and move on to all the other things this movie does wrong.

There's a group of obnoxious college kids staying in a cabin, eagerly awaiting the arrival of their friend Michael. You have a sci-fi geek, a pot smoking dweeb, two token black characters, a couple of preppies and two bimbos. We only care about Nick, the good looking drop-out with a serious crush on Tina, the girl next door. Tina is spending time at her old home, a cabin just across the way, with her mother and her shrink, the casually cruel Dr. Crews. Tina has been in a mental asylum for quite some time, troubled since childhood. This is understandable as when Tina was a young girl, she accidentally killed her abusive father, drowning him in the lake after losing control of her latent psychic powers. Crews wants to keep Tina in an agitated state, all the better for recording on videotape the effects of Tina's telekinesis.

But that all backfires when Tina runs out to the pier one night, trying to miraculously resurrect her dead father from the lake (why his body would still be in the lake after a decade is anybody's guess). But lo and behold, Tina resurrects a sleeping Jason and off we go to the races.

The slow and painful races.

There's no need to belabor the point. This really isn't a good movie. It isn't even a good slasher movie. The most interesting bits of the film all have to do with Tina and Crews butting heads. There's a whole movie that could have been made about their relationship or the inherent danger of a psychically endowed, mentally troubled teen girl (in fact, they already made it; it's called CARRIE). Whenever the two of them are on screen together, the film manages to have some spark of life in it. But director/special effects artist John Carl Buechler desperately wants this film to be a special effects showcase. That's a problem though because the set pieces in the film (including the one in which a character gets all dolled up to impress a boy and then, for some unknown reason, heads off into the woods alone) are as weak as day old coffee. And the payoffs, as previously stated, are all missing. They're jokes without punchlines. Where's the fun in that?

The fact that the film is way over-lit and lacking in any atmosphere is another problem, as is its shrieking score that mixes Harry Manfredini's original soundtrack with hideous discordant noise. I suppose the acting is as good as you could expect in a film called FRIDAY THE 13TH, PART VII: THE NEW BLOOD, but the characters are forgettable and largely unsympathetic. There just isn't enough film in this film to latch onto and every moment that goes by feels like an eternity.

But then you get to the finale, the throw down between Tina the Tight-Bodied Telekinetic Teen and Jason the Crystal Lake Slasher, and the mood brightens up a bit. The film barrels down the rabbit hole of nonsensical bullshit. There's a lot to enjoy about the final 20 or so minutes of the film, provided you like your cheese sliced a bit thick. Were it not for the truly insulting coup de grace, the final battle between Tina and Jason would have sent the film out on a high note. As it stands, it kind of makes up for the previous hour of godawful barf but just barely.
Posted by David Grant at 7:21:00 PM
Email ThisBlogThis!Share to TwitterShare to FacebookShare to Pinterest
Labels: Friday the 13th Part 7, Horror, Slasher film, The New Blood