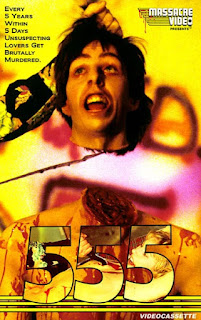 I rented 555 way back in 1988. I saw it sitting there on the New Release shelf of my local A-Z Video, right beside stuff like WHO FRAMED ROGER RABBIT? and THE KISS. Move your eyes an inch or two to the left. Look at that box art! What gore hungry 10 year old wouldn't want to see that movie? But if only I paid more attention… if only I heeded the advertising warning that was printed on the original box art, the one that stated “Caution: Viewing may cause severe damage to your brain cells”… Maybe then I would have known better.

555 is a shot on video slasher film from


Don't you dare click away to go read a review of something decent. I sat through this film again for YOU, damn it. The least you can do is give me a few minutes of your time. Let this review be your advertising warning. Let me spare you my unfortunate fate.

As their “investigation” (there's a reason I put that in quotes) continues, they discover that this series of murders closely resembles other murder sprees, all happening every five years on the fifth day of the fifth month (hence the title of the film). The coppers interview, harass and threaten a single witness/suspect during their investigation, a retired military man they feel is suffering from Crazed Vietnam Vet Syndrome. But keeping an eye on one middle aged man is too much work for our intrepid coppers and their suspect goes missing. All the while, more bodies are being found, mutilated and violated by some nut job dressed as a 1960s hippie.

From the opening credits that look like they were done in Windows Movie Maker to the obviously-dubbed-by-a-man screams of a woman, this film wastes no time in telling you, right there in its opening five minutes, that it will be a rough, miserable experience. Do not be fooled by its ghoulish box art, folks. 555 is NOT a slasher film. It is a police procedural through and through, and if there's one thing you need to know about shot on video police procedural movies, it's this: they suck, long and hard, and without mercy.

Prepare for endless scenes of people sitting around an obviously fake room, reading obviously blank pieces of paper meant to be police reports. Expect no real investigation to be done, just scenes of cops getting phone calls telling them expository facts (which they will repeat out loud for the sake of the audience), all because the filmmakers didn't have money to actually shoot these characters doing something resembling real police work. Expect characters to discuss the same seven or eight things endlessly just to pad the film out to feature length. Expect an ending that features all the action taking place off screen because making a good movie is too much damn work. Maybe they didn't expect anyone to actually watch this film all the way through. Maybe that's why we don't ever get a satisfying explanation for all this idiotic shit, just a lazy ending that barely makes sense.

555 is a boredom parade, only occasionally livened up by the cheapo murder scenes. For as hilariously fake as they are, some of them are really quite nasty. Had the movie been properly budgeted and filmed, it might have even rivaled films like MANIAC in the “needlessly brutal murder scenes” department. Unfortunately, none of the killings work well enough to escape their poverty row production origins. It's difficult to be shocked when the actresses can barely contain their laughter as they're cut to ribbons by a man dressed like Jerry Garcia. I don't know why you would zoom in and hold on the chest of an actress who can't even be bothered to hold her breath as she pretends to be dead. It kinda ruins the mood when a single stab wound causes a tidal wave of blood to splash all over the walls. Moreover, if you're going to use a fake knife rigged with blood tubing, at least instruct your actor not to squeeze the handle when the knife isn't touching the supposed victim's flesh. Still, all problems aside, the murder scenes do at least offer something of interest to slasher film fans, which is more than can be said about the characters.

Simply put, every single character in this film is a shit human being worthy of a slow, painful death. Not only do our three leads argue every single time they're on screen together, they throw histrionic temper tantrums at a moment's notice. They don't just bicker with each other either, they flat out go for the jugular. Our hero cop calls our hero reporter a “cunt” in their very first scene together. Instead of simply sharing information with our hero cop, our hero reporter starts off with “listen to me, you stubborn Irish cocksucker”. Every single character in this film is a fucking prick and their constant bitching and moaning and fighting and whining just made me want to finish watching this ungodly bag of puke with the volume off.

For a long, long time, 555 was my go-to answer whenever someone asked me to name my worst film of all time. Back in 1988, it took me the entire two day rental period to get through the film. I kept stopping it, ejecting it, cursing it, threatening it with violence… But today, I decided to power through the entire film in one sitting. I won't lie, it was rough. I found myself drifting off, getting up, wanting to do anything other than suffer through the tedium of it all. I did it though. I made it from opening credits to closing credits. I even watched the awful trailer for some other awful movie that was attached to the end of the film, another way for the filmmakers to pad out the overall running time.

Is it still my choice for the worst movie ever? No. I've seen thousands of films since 1988, many of which are far worse than anything Koz put on tape. But make no mistake, 555 is a cinematic atrocity. It is dull as dishwater and as appetizing as shit. It is barely competent, horribly written and full of actors less capable of delivering convincing dialogue than a whole Roomful of Tommy Wiseaus. It's no DON'T GO NEAR THE PARK, but man oh man, it ain't no TROLL 2 either.
Posted by David Grant at 9:54:00 PM
Email ThisBlogThis!Share to TwitterShare to FacebookShare to Pinterest
Labels: 555, shot on video, Slasher film, Wally Koz, Worst Films Ever Made