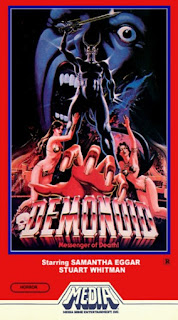 The universe is full of mysteries, large and small. Is there anything beyond the material world? Was there anything before the Big Bang? The intricacies of quantum field theory, the explanation of abiogenesis, how Friends managed to stay on the air for 10 goddamn seasons… Some of the great mysteries of our time, maybe even unanswerable ones. I would like to add to that list of magnificent mysteries the following conundrum: why the hell are there so many horror movies about killer disembodied hands?

While I don't doubt that chirophobia is a real thing, I would imagine a great majority of people don't find themselves losing sleep over the idea that a disembodied hand might be lurking beneath their bed. It's a ludicrous idea. What could it possibly do to you besides poke you in the eye or clumsily fondle your genitals? Good luck strangling someone to death only using the muscles in your hand. Good luck tossing something heavy through the air without using your wrist. I can buy the idea of Thing being a useful addition to The Addams Family. He would pick up lightweight items like a phone receiver or a post card or two. He would even play chess with Gomez (and no, I don't know how a hand knows how to do any of that) from time to time. Easy enough, right? Small, lightweight game pieces? Well within the range of possibility. But when you ask me to believe that a disembodied hand can throttle a human being to death... Come on now. Even I have my limits.

But the disembodied killer hand of Alfredo Zacarias' DEMONOID isn't just a regular old hand. It's the Devil's Hand and as such, this bad boy can do all manner of things. It can shoot someone in the back. It can stow away on a train. It can crush heads and break bones, possess people's minds and bodies, honk car horns, and even seal and mail a package. And it does all of this while being not just the Devil's Hand, but the Devil's LEFT Hand. Now THAT is impressive.

So what about the movie this Devil's Hand stars in? How impressive is that? Welllllll

Meet Jennifer, a bubbling brook of unbridled optimism. And meet her husband Mark, a man who is one Tequila shot away from putting a gun in his mouth. Mark is having a hard time with his recently purchased Mexican oil mine. Not only has it been shut down for quite some time, Mark can't even find anyone willing to work there. It is, as these things always are in horror movies, considered “cursed” by the locals. In an effort to show the locals just how cursed this "cursed" mine is, Jennifer and Mark decide to do a bit of spelunking. They find ancient remnants of some mysterious cult and a metal relic, the same relic thought to contain the dreaded Devil's Hand.

Turns out, it does indeed contain a disembodied evil killer hand. Once unleashed, the Devil's Hand possesses Mark and Mark in turns forces every local he can find into the mine before blowing it up with a large amount of explosives. His job done, Mark flees Mexico and spends an unspecified amount of time gambling in Las Vegas. You can add “great at craps” to the list of things the Devil's Hand excels at. But being good at gambling in Las Vegas has a downside. Mark is kidnapped by two hustlers looking to learn the secrets of his success. Unfortunately, their threats anger Ol' Leftie so Mark murders the both of them. In a moment of clarity, Mark decides to end his relationship with the Devil's Hand. He douses himself with gasoline and POOF! up he goes in a ball of flames.

Jennifer finally manages to track Mark down only to find out that he's been burnt to a crisp. Fearing the Hand has made it's escape, Jennifer enlists the help of a priest, an old boxer named Father Cunningham. When they visit Mark's grave, they find it destroyed from within, as if the crispy corpse of Mark had dug it's way out. And yep, that's exactly what happened. The Devil's Hand clumsily walks Mark's corpse over to a cop car, severs itself from the body using the car door, and then waits patiently for a beat cop to return. When he does, the Devil's Hand goes into action, possessing the cop before driving off into the night.

And that is, more or less, how the entire film plays out. The Devil's Hand possesses someone then attacks Jennifer. Jennifer gives a modicum of resistance before giving up. The hand is severed, the cycle begins again. Apparently, the Devil's Hand is out for Jennifer specifically. No real reason for this plot development is given other than “she was the one who found it and brought it home” which is a great excuse for why a rescue dog won't stop licking your face, but not a great reason for why a disembodied hand won't stop trying to kill a woman.

But logical thought and narrative integrity is clearly not what DEMONOID is interested in. This is a movie in which a possessed cop storms a clinic, gun in hand, and matter-of-factly tells a doctor “you cut my hand off or I'll kill you”. The doctor, of course, complies, gets himself possessed by the Devil's Hand, and then goes on a rampage, leading to a long car chase with the police. Why exactly does any of this happen? Is the Devil's Hand, a body-hopping supernatural entity, really concerned with getting arrested? Does he have priors on his record? Maybe child support payments due? The Devil's Hand can clearly reanimate whole corpses so why is it suddenly concerned with not being shot by the cops? Given that this hand can seemingly do anything it damn well pleases, there really isn't a reason for any of this to be happening. This movie could have been 20 minutes long.

But if it were shorter, we wouldn't have time for the obvious and wholly annoying rip-off of THE EXORCIST. Father Cunningham, like Father Karras, likes to box. He has a struggle with his faith. The end scene involves someone pleading for the Devil's Hand to possess them instead of it's current victim. Of all the thousands upon thousands of movies DEMONOID could have chosen for rip-off material, it had to choose one of the most serious minded and realistically portrayed supernatural horror movies of all time. DEMONOID is neither of those two things.

So there is a tonal problem with this film. Hell, there are many problems with this film. Even at 80 minutes, it feels 20 minutes too long, primarily because it keeps going over the same ground again and again. The dialogue is laughably bad, the direction is lazy and the score is grating to say the least. Roy Jenson and Stuart Whitman are both bored to tears by the material and it shows in their performances. Thankfully, even though she's spewing horrible dialogue and having to act terrified of a plastic hand that's been taped to her hair, Samantha Eggar is on top of her game here, all bug eyes and histrionics. She at least gives the film a pulse.

And yeah, the Devil's Hand is great, even if the effects work is shoddy. I got a few laughs out of the film as a result. It isn't a painful experience to get through, but it isn't a great time either. It's mostly a bore, with precious little in the way of gore or nudity to help pass the time. It's the kind of movie that would benefit from commercial breaks. You could get up every five or six minutes, grab a bite to eat, take a piss, or throw a brick at a neighborhood kid. Maybe even have a shot or two of whiskey. And that's how I would recommend watching DEMONOID, piss faced drunk or in six minute chunks over the course of a few hours. Trust me, it won't hurt the experience. There's really nowhere to go but up.
Posted by David Grant at 11:28:00 PM
Email ThisBlogThis!Share to TwitterShare to FacebookShare to Pinterest
Labels: 1980, Demonoid, Horror, killer hand, Messenger of Death, Samantha Eggar