THE GIALLO PROJECT - A... COME ASSASSINO 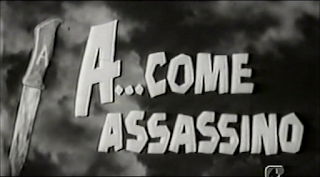 In a grand Italian villa, just shortly after 10 in the evening, a murder has been committed. Poor old John Prescott, the wealthy proprietor of an African diamond mine, has been found with his throat cut from ear to ear. Days later, his relatives gather in the villa to listen to an audio recording of John Prescott's will, joined by Prescott's most trusted business associate, his secretary Giacomo. We learn rather quickly why no one is in mourning. Prescott wasn't a kind man, nor was he especially loving to his family. In fact, it seems as if he hated every single one of them with a red hot passion. His will demonstrates this. Prescott's millions are to be divided in three, only payable after every man and woman in the room has spent a month living together in the villa. Then, after the 30 days have passed, the first three people to travel to Prescott's notary will be rewarded with one third of the inheritance. The not-so-subtle suggestion is quickly realized by Prescott's wormy nephew George.

“It's a provocation to...”, George screams out. He doesn't even have to finish the sentence. Everyone knows full well what John Prescott's intentions were.

The other members of the party include George's flirtatious wife, Adriana, an ex-stripper who was courted aggressively by the now deceased Mr. Prescott, and Martha, Prescott's sister, forever mourning the death of her husband. There's Angela, Prescott's pretty blonde niece and her milquetoast husband Armando. Rounding out the Prescott family is John's giggling idiot son, Julian, a man-child who is always seen playing with knives. The only real outsider is Giacomo, a beefy, bitter man not at all sorry to see his old boss dead. Around these suspects orbits a police detective, the ever watchful Inspector Matt. He's here to find out who killed John Prescott. What he should really be worried about is who is willing to kill for John Prescott's millions.

And that's the driving force behind Angelo Dorigo's A… COME ASSASSINO. To be honest, I shouldn't be classifying this film as an Amateur Detective story, in part because the Detective in question is a professional. It's also because A… COME ASSASSINO is more BAY OF BLOOD than it is THE BIRD WITH THE CRYSTAL PLUMAGE. It isn't a story with a single killer. It's a story practically littered with them. In the tally below, you'll only see two victims, but the film is stuffed full of dead bodies. See, no one actually cares who murdered John Prescott that night. They hated the man and he hated them in return. All anyone cares about is the money and it's that greed that sets the murderous mayhem in motion.

This is a film with many, many layers of deception going on all at once. We no sooner learn that Character A has been conspiring with Character B to frame Character C than we learn that Character B has been working with Character D to bring down Character A. It's an ever-shifting mass of bad intentions, ulterior motives and triple crosses. Of course, every character in this film is a horrible, despicable person so their eventual deaths don't exactly fill us with sadness, but there is a wonderful time to be had in watching these godawful creatures twist each other in murderous pretzels, only to have their greedy venom spit right back in their faces. It's such a joy to watch this all go down that I half forgot this was supposed to be a mystery rather than a glorious bit of cynical black comedy.

The solution to the puzzle of who killed John Prescott quite literally doesn't matter. It's just a MacGuffin, a bloody bit of plot to get this whole ball rolling downhill. What matters here is the whirlpool of immorality and greed, and the eventually drowning of all these disgusting characters in it. Taken as a tasty bit of hyper-cynical melodrama, the film works damn well. It has a brisk pace, the black and white cinematography is gorgeous (even though my copy of the film leaves MUCH to be desired), and the acting is all on point. Every actor, from Mary Arden to Sergio Ciani (aka Alan Steel aka the guy in all those awful Hercules movies), plays their part perfectly. They're just awful, terrible, horrible human beings.

But that's where I can see A… COME ASSASSINO losing much of it's audience. Because even though this is technically a giallo, there really isn't an awful lot of giallo in it. This is not a film that will appeal to murder mystery purists or even casual armchair detectives. Try as you might, you will not be able to piece together all the alibis, facts and lies in any kind of logical manner. Every character in this film is playing every other character in this film. It is lie after lie after lie for 70 straight minutes. So if you're looking for a puzzle to solve, stick with the jigsaw variety. But if you want a wonderful bit of immoral, blackly comedic melodrama full of backstabbings, rooftop brawls, shoot-outs and polite insults, A… COME ASSASSINO is a film to seek out. It's a great, entertaining ride.

A… COME ASSASSINO
(aka A… For Assassin)