THE GIALLO PROJECT - DATE FOR A MURDER 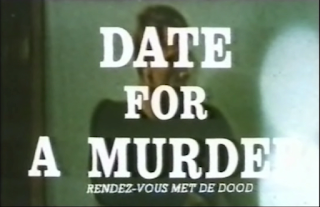 Vince Dreyser is an American living in Rome. He is, among other things, a private investigator and bodyguard to anyone with the cash to afford him. Vince has a chance meeting with an old friend, a chemical research scientist named Walter. Walter is off to be married in a few days time. The two friends, both on tight schedules, arrange a meet-up for later in the week. Only Walter never shows up. Shortly after, Vince catches word that Walter's traveling companions were found dead in an apparent car accident. Vince suspects foul play, a suspicion which proves to be all too correct. While nosing around, Vince is knocked unconscious by two thugs and left to die in a burning car.

Narrowly surviving the ordeal, Vince goes to work. He tracks down the mechanic who rented the car to Walter's traveling companions, beating the man mercilessly and threatening to set him on fire. The man gives him a name: Guido Salvatorelli. Vince tries setting Guido up, luring him out into the open at night to ambush him. Things go south however and Vince ends up in hot water with the local cops, men none too happy with an American shooting down an Italian, criminal or not, in the streets. The Police Commissioner, although weary of Vince's rough nosed tactics and penchant for shooting first and asking questions later, soon comes around to Vince's side. Men are being found dead all over the place, all of whom are connected in some way to Vince's missing friend.

Truth be told, DATE FOR A MURDER isn't really a giallo. It's more of a standard European action flick. Yes, there is a central mystery involving a string of murders and a few missing people, but the intent of the film is never to scare or even puzzle the brain. It's lightweight and airy, built around action set pieces rather than cold, spine tingling moments of suspense. But as the film is often referred to as a giallo, I thought it was worth a look and inclusion on the list, even if I don't personally feel that it belongs there.

DATE FOR A MURDER was co-written by Fernando Di Leo, one of the great masters of the Italian poliziotteschi. It feels very much like a first draft for the harder edged crime thrillers Di Leo would craft in the future, films like MILANO CALIBRO 9 and THE BOSS. It's filled with macho men, high fashion women, rooftop fistfights and flying bullets. The first time we see Vince, he's practicing dodging rubber bullets in his hotel room. The next time we see him, he's seducing a pretty blonde. The poliziotteschi preferred their heroes to be Men with a capital M. Often cruel and rarely above using violence to prove a point, the heroes of the Italian crime thrillers were often quite difficult to sympathize with or even care for. They're brutes, hyper-masculine alpha males, with blood lusts and libidos cranked to 11.

Thankfully, Vince Dreyser is more Euro-spy than gun toting rampage beast. As played by veteran Italian character actor George Ardisson, Vince is a likeable chap, one with a serious romantic interest in Fidelia, the fashionable upper class and sharp witted daughter of a wealthy family. The moments between the two are rife with flirting and light comedy, perfect for transforming a hard-nosed P.I. with a gun into the kind of character you can actually root for as he's gunning down gangsters and fear for as he rushes headlong into danger. And there's plenty of danger afoot, too. There's a terrific chase and scuffle on a rooftop, more than a few shoot-outs and a fantastic, tense climax set in a meat packaging plant. The highlight of the film however is the fight between Vince and an elderly cripple, the latter riding about in a wheelchair constructed from an old motorcycle. Watching the cripple try to run over a staggered Vince, swerving back and forth inside a cramped office, sums this film up better than I could ever hope to do.

The final confrontation in DATE FOR A MURDER is a surprisingly emotional affair, as is the moment just before the closing credits. Over the course of the film's 105 minutes, I found myself liking Vince quite a bit and as a result, I found myself becoming more and more invested in his search for his missing friend. I liked the film a great deal, even if it didn't turn out to be the giallo I thought it was going to be. It's free from the cynical excesses and graphic brutality that ran rampant in the Italian crime thrillers of the 70s. It's enjoyable and lightweight, shot through with just the right flavor of humor. Is it suspenseful? Sometimes, but rarely. Is it nerve shredding? Barely. Is it really a giallo?

Well, I guess the jury is still out on that. For my money, no, it isn't. It's a crime thriller with just a pinch of yellow.

DATE FOR A MURDER
(Omicidio per appuntamento)