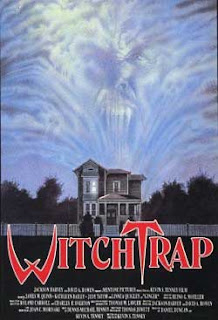 WITCHTRAP is the film that killed my first VCR. I arrived home one Saturday afternoon, a bag full of tapes in my hand. My mom was going out with my aunts. My sister was busy with her boyfriend. My dad just wanted to be left alone. I had the run of the place. The living room belonged to me and me alone. So down I sat, hopefully for some great bared breasts and awe-inspiring spilled blood. I popped WITCHTRAP in the VCR and it roared to life. I reached the 20 mark of the film when suddenly the VCR made a horrible, mechanical noise, what I imagine an Autobot fart would sound like had Autobots possessed bowels and assholes. And then… nothing. The tape lodged itself deep inside the guts of my beloved VCR, strangling it to death.

And somehow this was all my fault.

I got yelled at quite a bit that day. Did I push the tape in too hard? Was I fucking around with it as it played, maybe dropping it or throwing it against the wall? Nope. I just put the damn tape in and was sitting there waiting for the inevitable display of nudity from Linnea Quigley when the damn thing just died. The video rental shop made my dad buy a replacement copy of the film. From the growls he made into the phone, it couldn’t have been cheap. We would have to wait a full two months before the repair shop called and informed us that we could pick my dearest friend from the hospital. Those two months were the longest two months of my life.

I never did get around to finishing WITCHTRAP. I had never bothered to rent the film again. I’ve never been the superstitious type, but I feared what would happen if I rented it again and tried to watch it. Maybe this time it would catch fire instead of simply getting wrapped around the heads and pulling them out of place. But here I am today with a shiny, new Blu-ray/DVD combo pack copy of the movie. I decided to watch the DVD on my old laptop just to be safe.

Well, my old laptop survived the experience unscathed, but my brain cells sure didn’t. WITCHTRAP is an exceedingly stupid movie, horribly acted and written to boot. The plot is 45% The Haunting of Hill House, 5% GHOSTBUSTERS (no joke, there are ghost traps in this movie) and 50% bullshit. A group of special investigators spend the day in a supposedly haunted Gothic mansion in an attempt to prove the existence of evil spirits, all so the owner of the property can repackage the place into a haunted bed and breakfast tourist trap. The leader of the investigation is Dr. Agnes Goldberg, a spiritualist who is also, for no apparent reason, an atheist. Her husband, a mental medium, tags along, as does Whitney, a physical medium (and yes, the film explains the difference). Oh, and Linnea Quigley plays a video technician named Ginger whose sole job is to set up a single tripod, easily the best bit of casting in the entire film.

Then there’s the trio of security officers, one of whom is a skeptic with a bad attitude, a personality quirk that got him fired from the police force even though he’s apparently so damn good at his job that he can crack a 20+ year cold case in 8 weeks. They’ve been brought along to ensure the safety of the Scooby Gang, though I’m really not sure what good a gun would do against the ghost of an ex-serial killer warlock. But as there is a creepy, overweight peeping tom / groundskeeper wandering around, it’s better to be safe than sorry.

Truth be told, there’s a bit more going on in WITCHTRAP than you might expect. There are discussions of reality, the nature of belief and even a brief debate on theodicy. There is a short conversation about evil and whether evil is a kind of metaphysical force or merely a product of human nature. There is talk of God and the devil and the afterlife, and all the other bits and pieces of discourse that might pop up in a film all about conflicting metaphysical points of view. Shame then that the dialogue doesn’t adequately address any of those topics, coming off as middle school banter rather than educated thought. It also doesn’t help that the actors are all stiff, their voices all dubbed by people who sound like they were just woken up in the middle of the night by the sound of their careers crashing and burning.

The dialogue in this film swings wildly, sometimes risible, often times atrocious, sometimes a bit racist, and often times damn near unintelligible. Every character is flat and lifeless, with motivations that change from scene to scene. According to IMDb, the screenplay for WITCHTRAP was completed in just six days and hot damn, does it show. The dialogue is so unbelievably stilted and devoid of nuance. If you took a foreign screenplay and sent it through Google Translate, this is how the dialogue would read. There isn’t a single line in this film that feels natural.

But then again, nothing in this film feels natural. Nothing even makes sense. I could fill three reviews with all the inconsistencies and unexplained shifts in motivation. I could fill the next paragraph without trying, just rambling off things that either make no sense or ruin the tonal consistency of the film. Here, watch me go.

Oh man, supernatural stuff is going down, better call the police. Oh no, we just found our friend dead in the bathroom, better keep ghost hunting. Oh no, we just found that one cop that we all hated dead in the bedroom, better get out of the house quick. Damn, the gate has been padlocked, I guess I won’t bother climbing that four foot wall right beside it. There’s a car speeding towards me!, better not try to move out of the way. Bullet hits the gas tank of a van, van doesn’t explode. Bullet misses the van entirely, van explodes. This urn is clearly the source of the warlock’s power, better just leave it on the mantle place. Oh no, someone stole the battery out of the car, better not just walk off the property. Phone’s dead!, sucks that we’re like a half mile from town. Behold! I’m an all-powerful Satanic warlock reborn in the flesh, guess I’ll just punch this guy to death. I’m an atheist, though I still believe in Satan. Man watches as a knife is magically thrown at him from halfway across the room, nah there’s gotta be a rational explanation for that.

I know a lot of people will watch WITCHTRAP and walk away thinking “wow, what great schlock!”. No, sir. This isn’t great schlock. This is what schlock looks like once the sell by date has passed. This is rotten schlock, schlock that needs to be thrown away. This movie could have been fun were it not for the fact that it is so damn incompetent. There is no pulse to it, just 90 minutes of boring bullshit and badly executed sight gags. Worse, about 70 of those minutes are shot in the day time so all attempts at atmosphere and spooks are for naught. You can’t be scared when the movie looks THIS bad. You can’t be entertained when every single line of dialogue sounds THIS bad. And no, you can’t make it all better by having Linnea Quigley strip down for a shower scene or include a shot of a man’s head exploding. You can’t wallpaper a turd.
Posted by David Grant at 9:35:00 PM
Email ThisBlogThis!Share to TwitterShare to FacebookShare to Pinterest
Labels: ghost, haunted house, Horror, Linnea Quigley, NOT Witchboard 2, Witchtrap