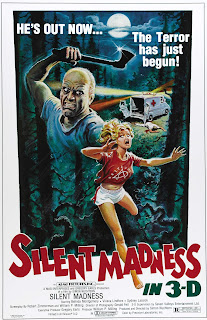 Do you like your slasher films convoluted? If the answer is “yes”, you might get a few kicks out of SILENT MADNESS, a 1984 slasher film from director Simon Nuchtern, the guy often credited for putting the snuff in SNUFF. There are about four different story lines fighting for dominance in this film, all of them wildly different in both tone and pacing. The primary plot of the film involves a madman returning to his old stomping grounds, a nice sorority house at the Barrington College for Women. 17 years prior, the madman, Howard Johns, had committed a string of brutal nail gun murders, leaving half a dozen sorority girls dead in the boiler room of the building.

The second plot line involves a psychiatrist, Joan Gilmore, who works at the Cresthaven Mental Institution, Howard Johns' former residence. Gilmore discovers that it wasn't Howard Johns who was supposed to be released back into the wild but a harmless man named John Howard. In any ordinary universe, the institution would call the cops, have Howard Johns picked up, and everything would be back to normal. But in the universe of SILENT MADNESS, nothing of the sort happens. The head of the institution, Dr. Kruger, instead lies and claims that Johns died recently and was cremated. His co-director sends Joan on a weekend holiday while the rest of the hospital administration can figure out how to sweep this otherwise innocent clerical error under the rug. Why? I honestly have no idea, but I think it might have something to do with the odd, never explained experiments being conducted in the institution, the ones that involve the patients being placed into giant zip lock bags and force fed psychotropic drugs.

Then there's the romance story line. Joan, now playing amateur detective, meets and falls for a newspaper guy named Mark. He has an idea. Borrowing an old Omega sorority ring from his secretary, he has Joan masquerade as a sorority alum, giving her inside access to the building. Joan is convinced that Johns has made his return to the sorority home, but needs to understand the man a bit better to bolster her chances of bringing him back to the asylum. She talks with Mrs. Collins, the bitter, whore-hating house mother. She learns all about the murders and all about Mrs. Collins' poor, dead son, Francis.

And then comes the fourth bit of the story. After Joan has a close encounter with Johns in the sorority house boiler room (and after being blown off by the bloated town Sheriff a couple of times), Joan contacts Dr. Kruger at the institution. Although outwardly helpful, Kruger and Associates decide to end this drama once and for all. They send two orderlies, a couple of scuzzy sleazeballs named Virgil and Jesse, to kill both Johns and Joan.

All because of a simple clerical error.

So yeah, this film is stuffed full of shit, some of which is actually rather entertaining. The only problem is that it never quite gets the balancing act right. SILENT MADNESS is clearly and unmistakable modeled after HALLOWEEN. It has an escaped (well, kind of) madman returning to the scene of his past crimes with a psychiatrist hot on his tail. It even gives us stand-ins for Annie, Lynda and Laurie in Cheryl, Pam and Jane. But this is HALLOWEEN if Loomis was wayyy less motivated and was the unequivocal main character of the film. Aside from a few first act deaths, the majority of the slasher stuff is kept for the final 20 minutes, the same 20 minutes that details the orderlies and their attempts at murdering both Johns and Joan. So the emphasis during the entire second half is on an investigation into a question (has Johns returned to Barrington College?) that we already know the answer to. Waiting for the killings to start up again is quite the wait indeed.

And if the stuff involving the asylum cover-up made any sense, that might be more forgivable. There's an entire film in there somewhere. When we finally get to see what goes on behind the closed doors of Cresthaven, you can feel the film wanting to drift into the “medical conspiracy” lane of the exploitation highway. We only get a few brief minutes inside the secret areas. We see patients strapped to odd machines and struggling inside clear plastic bags. What the hell is going on here? Why are these patients being treated like this? Is there some connection between the treatment of these patients and the murderous behavior of Howard Johns?

The answers to those questions are as follows: I have no idea, beats the shit outta me, and no. So what is the point of all of this? Again, I have no idea. It's just a MacGuffin really, but it's a remarkably interesting one and I kinda wish the film would have chopped out everything involving Gilmore's relationship with Mark the newspaper editor to give us some kind of insight into the madness going on inside the mad house. Because Mark just exists to hyper aggressively flirt with our lead and bark out commands to scared sorority girls. He's extraneous and ultimately completely useless. But nut jobs experimenting on nut jobs? Sign me up!

But for all my complaints about pacing and narrative continuity, I have to admit that I enjoyed my time watching SILENT MADNESS. It's a bonkers film, ambitious yet deeply flawed. The cast is great, especially the late Sydney Lassick as the fat, obnoxious Sheriff. A few SLEEPAWAY CAMP stars show up, like Katherine Kamhi and Paul DeAngelo. Joan is (somewhat) convincingly played by Belinda Montgomery, an actress best known for playing Doogie Howser's mom. And there's even an all-too brief cameo performance by one of my personal favorite 80s actresses, Elizabeth Kaitan, here playing a buxom skateboarder who has her lovely, wonderful head crushed in a mechanical vice.
Unfortunately, while the phrase “crushed by a mechanical vice” might perk you up a bit, the murders in SILENT MADNESS are mostly bloodless, largely off screen bits of mayhem, so if you're expecting FRIDAY THE 13TH: THE FINAL CHAPTER levels of gruesomeness, keep moving along. That isn't to say that the murder scenes are uninteresting. There's quite a bit of pleasure in watching someone get stabbed to death while playing a vintage Dragon's Lair arcade cabinet or in seeing the killer set a devious trap involving a light switch and a large electric drill. However, for pure, gory catharsis, SILENT MADNESS is undeniably a let down.

And so is the fact that SILENT MADNESS cannot be viewed as it was intended to be viewed. This was originally a 3D release and it must have been a nice sight to behold back in the day. Unlike FRIDAY THE 13TH, PART III, a 3D film content with just shoving a stick in our face every 20 or so minutes, SILENT MADNESS goes all out with a near constant barrage of thrown axes, outstretched hands and bloody crowbars being jammed in your face. Also hugely unfortunate is the fact that the only version of the film I could find is poorly (and I mean POORLY) cropped. There's an entire third act struggle that takes place off screen thanks to poor cropping. Every other dialogue scene had a character's head bifurcated in the frame and the overall look of the film is muddy and murky. While it isn't exactly a high octane thrill ride, the final chase of the film would greatly benefit from being seen in pristine widescreen. Not only would the action be, you know, visible, but the constantly shifting, Bava-esque color palette would probably be as visually arresting as Nuchtern intended it to be.

Alas, I had to make do with the copy I had at my disposal. But even though the 3D gimmick was nowhere to be found and the cropping always made me feel like I was missing out on something interesting in virtually every scene, I really did enjoy my time with SILENT MADNESS. It's charming, schizophrenic and unabashedly cheesy at times. It's just the right mix of homage, just the right flavor of inane. It might not be bloody or scary, but it has heart and it has a personality all its own. Now if only we could get a nice, restored 3D version of the film on Blu-ray. I'd buy it in an instant.
Posted by David Grant at 12:20:00 AM
Email ThisBlogThis!Share to TwitterShare to FacebookShare to Pinterest
Labels: 1984, 3D, Silent Madness, Slasher film