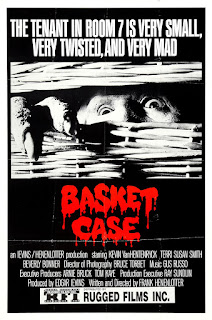 At this point, I think we have enough “Twin Terror” films for “Twin Terror” films to be considered a proper sub-genre, instead of something I just made up to give this sentence some awesome alliterative action. They all play more or less the same game. Twins are locked in a cycle of codependency, utterly reliant on one another, until one of the two meets someone special and the relationship turns sour, usually poisonous, oftentimes murderous. These films all contain some variation on that idea, whether it's Cronenberg's DEAD RINGERS or De Palma's SISTERS, but as is usual in the case of like-minded films, the devil lies in the details. SISTERS is a far more wonky bit of work than DEAD RINGERS, a film very much about psychosexual dominance and fear of femininity, running the gamut from voyeuristic fantasy to politically tinged satire to out-and-out freak show with its late game inclusions of split personalities and hypnosis quackery. One story, two different looks.

But that's because David Cronenberg and Brian De Palma are two very different sides of the same coin. Both have filmographies full of darkly sexual thrillers with their fair share of bodily atrocities, but Cronenberg is the abyss you gaze into while De Palma is the abyss that gazes back. Frank Henenlotter is neither of those things. He's the goof, the prankster, the slightly creepy uncle that knows all the best dirty jokes and has a collection of questionable, pervy magazines stashed somewhere around the house. Henenlotter's films are exercises in pure, visually audacious grossness, best exemplified by BRAIN DAMAGE, a film in which a talking phallic parasite named Aylmer pulls a woman's brain out through her mouth.

The twins on display here are Duane and his brother Belial. After witnessing some middle aged man being mauled by something unseen, we find Duane walking down the mean streets of 1980s New York. He's carrying a large wicker basket and sporting a fine 80s mop of hair. Duane gets himself a room at a cheap hotel, briefly meets his prostitute neighbor and then heads inside for some sleep. As the film progresses, we learn that the wicker basket contains Belial, Duane's once-conjoined twin, who is basically just a lumpy head with arms. They're tracking down the doctors that separated them at the age of twelve, Duane keeping watch as Belial tears them apart with his freaky oversized hands. Because that isn't bizarre enough, Duane and Belial have a psychic connection. Duane can telepathically hear Belial talk and when something happens to one of them, the other can sense it clearly.

Things proceed according to plan until Duane meets Sharon, a front desk clerk for one of the doctors he has marked for death. The two hit it off, even sharing a kiss on their first date. Naturally, Belial flips his shit, trashing the hotel room before taking out the rest of his frustration on the busy body down the hall. Whether it's out of jealousy or just out of frustration at this little hiccup in their plans for revenge, Belial soon targets Sharon for destruction, leading to the inevitable tragic climax of the film.

Let's get the obvious out of the way first. This film is weird. It's also remarkably cheap, shot on 16mm with a limited amount of actual production quality, like complex lighting schemes or fluid camera work. The script moves between gags that don't work (two of the doctors are named Dr. Kutter and Dr. Needleman. Hardy har har) and sequences that, strangely enough, work remarkably well (as idiotic as the idea is, the separation scene and the flashbacks that follow are actually quite emotionally resonant), leading to an ever-shifting tone that keeps the film perpetually off balance. The effects work isn't great either, with basement quality stop motion and obvious puppetry. The list of problems is long.

I'll be goddamned if this film doesn't work. The closest film I can compare this to is Paul Bartel's PRIVATE PARTS. These films have absolutely nothing to do with one another either thematically or narratively, but they're both made up of bizarre occurrences, filled with performances that are uniquely nuanced and crafted with such a strange, almost intangible, weirdness that everything just comes together perfectly to create a kind of peculiar verisimilitude. The film feels genuine (mostly because it was created by a man with an obvious love for his material) even though it's patently absurd. Even the ridiculous Belial, a puppet that looks like it was created by melting Halloween props together with a blowtorch, feels like an actual entity here. There isn't much going on behind the scenes in terms of meaningful subtext, but the onscreen action has a definite, unavoidable gravity to it. As I watched the film again after nearly a decade, I found myself invested in it. That's not something I thought would happen.

Pinpointing exactly what it is about BASKET CASE that elevates it above your typical monster movie is difficult, mostly because it isn't any one thing. For as cheap as the film is, there's some brilliant low budget filmmaking going on here and the writing, while predictable, has an almost avant-garde feel to it, vacillating between dead pan comedy and moments of on-the-nose immediacy. There's something to be said about camp played straight and how that can heighten the aura of nonsense while also normalizing all the batshit craziness of it all. Some of the best horror films do this. They balance nonsense with straight faced seriousness so well that we completely buy the idea of a crispy-faced serial killer massacring teenagers in their sleep. We buy into the idea that a masked maniac can take two clips and several axes to the torso but still get right back up. The vast majority of horror films are, at the end of the day, dumb as fucking dirt, and when you play that material completely straight without any recognition of the bullshit of it all, you tend to end up with films that are about as fun as castration and as scary as puppy dogs.

But when films knowingly and willingly acknowledge their logical lapses and idiotic mechanics, deliberately working them into a kind of alternate extant reality, you can come away with a film that engages an audience rather than separates it from an audience. BASKET CASE is pulled off with such verve and such self-awareness that it transcends its meager, dumb origins and becomes something genuinely affective and effective. And again, that's not something I thought would happen. I don't even know if I explained it well. Truth be told, I'm probably just as confused as you are by it all.
Posted by David Grant at 2:07:00 AM
Email ThisBlogThis!Share to TwitterShare to FacebookShare to Pinterest
Labels: Basket Case, Camp, Frank Henenlotter, Horror, There's a monster in your basket