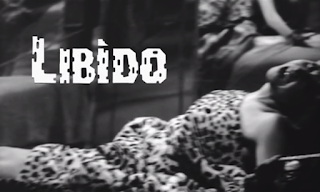 When he was a child, Christian witnessed his sex maniac father murder a lusty, young blonde. 20 years later, Christian returns to his father's home with an eye on selling the property once the deed is transferred to him in a few months time. Along for the visit is his finance, Helene, the estate caretaker (and close family friend) Paul and Paul's ditzy, younger blonde wife, Brigitte. There is obvious acrimony between Christian and Paul, the former eager to fire his longtime associate and the latter desperate to keep the estate in the family name. As the days go by, Christian gains the attention of Brigitte, Paul and Helene begin spending more time together, but far more worryingly, Christian begins seeing and hearing things around the estate. Is he going mad or is something far more sinister afoot?

LIBIDO marks the arrival of Ernesto Gastaldi, one of Italy's foremost genre film screenwriters, in the land of the giallo. The simple story of LIBIDO is by far the most typical form of the Poisoned Past narrative found in the entirety of the filone and Gastaldi would go on to refine the narrative of LIBIDO through multiple films including THE SWEET BODY OF DEBORAH, A… COME ASSASSINO and THE STRANGE VICE OF MRS. WARDH, a landmark title in the giallo. It's a simple premise that works, a character haunted by something in the past is tormented by someone in the present, someone close, someone who knows all too well the extent of their trauma. These usually skew towards the psychosexual, but LIBIDO plays it more straight, bearing little of the complexity that would go on to mark Gastaldi's later work.

The film begins with a quote by Freud explaining his idea of the libido (the psychic energy that exists in our subconscious) and from that we surmise that this will be more of a psychological thriller than a potboiler. Indeed, Gastaldi seems to be playing that game. It's easy to read the characters as metaphors for Freudian sexual/power dominance ideas with the id, ego and superego being represented by Brigitte, Helene and Paul respectively. But whatever psychological depth Gastaldi and his co-writer Mara Maryl (who plays Brigitte in the film) were trying to add to the film gets brushed aside for a more routine and simplistic mystery in the later half. That isn't to say that the second half of the film is therefore uninteresting or subpar. Far from it. Once LIBIDO takes its sharp right turn into mystery thriller territory, it becomes a bleak, delicious bit of filmmaking.

The final third of the film piles on the twists, turns and reversals as characters get caught in lies, divulge secrets and display signs of malicious intent. Christian owns up to having violent impulses just before Helene starts sporting scratches and bruises on her body. Is Christian harming her while in some kind of fugue state? Brigitte lets slip that while Christian may think Helene and Paul didn't meet until after their engagement, the truth is that Paul deliberately set up the meeting between Helene and Christian, hoping it would lead to their engagement. Christian follows Paul and Helene when they head off to do some shopping. He later spies them in an embrace outside of a hotel. Are they trying to drive him crazy to get their hands on his inheritance?

The final solution to this puzzle is a triple twist ending that would feel positively hackneyed had it not been set up with so much care. While undeniably twisted, the final moments of LIBIDO pack a genuine punch, wonderfully, blackly ironic in their machinations but almost heartbreaking at the same time. While the impact will likely be diminished if you're at all familiar with Gastaldi's later work (especially YOUR VICE IS A LOCKED ROOM AND ONLY I HAVE THE KEY), the send-off to LIBIDO definitely sold me on the films greatness. And I don't use that term lightly. With its abundance of memorable performances, stylish direction and suitably slippery narrative, this is a film that deserves a critical reappraisal. It is an easy film to recommend, especially if you're interested in the foundational roots of the giallo.