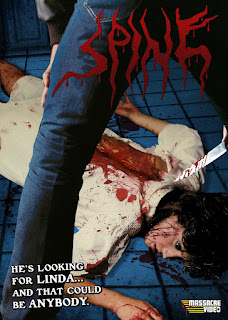 Back in the mid-90s, my high school pals and I made quite a few short films, usually mock commercials, but we did try our hand at making a feature length film. It was a corny, in-joke filled romp called LITTLE PLASTIC DEMONS. I was the writer, director and special effects guy. No lie, it was fun. We were making a movie! Many laughs were had.

Then it came time to edit the goddamn thing. Now, this is how you had to do it back in the day. You hooked one VCR into another VCR. The first machine was your playback and the other was your recorder. If you somehow managed to sync up the play delay of the first machine with the record delay of the second, you could, in theory, put a movie together. You could even dub the film or add sound effects using the camcorder microphone. Easy peasy, right?

Nope. It was a fucking pain in the balls, but it was what you had to do unless you could afford something more professional. We tried just filming in continuity, pausing the camcorder when we needed to change angles, but there was always a weird two second rewind that happened between hitting the pause button once and hitting it again. Of course, we didn't know this until we went back to watch the footage and realized that lines were getting cut off, actions were being truncated, etc. But who cares? We were making a movie! And it wasn't like shot-on-video stuff was even getting distributed, right?

Every video rental store in the 1990s was full of shot-on-video movies. It's a testament to just how hungry for content video renters were at the time. We would walk into a store and plunk down our hard earned cash just to watch someone's home movie. Quality didn't matter. We just wanted entertainment. We didn't care how it was made or where it came from. We wanted more, more, more, more, more. So to keep up with demand, distributors started grabbing whatever they could and vomiting it out into every A-Z Video they could find. And I watched 'em all, from SPLATTER FARM to 555. I didn't care, damn it. I just wanted stuff to watch.

This was back when I wanted to be a film director so watching these shot-on-video abominations was strangely inspiring. I mean, they could do I so why couldn't I? But watching any of these movies today is like pulling teeth. It never occurred to me back then that just because someone COULD make a movie, it doesn't mean that they SHOULD make a movie. Most of these films are terrible, but it isn't really because they're shot-on-video. John McNaughton could have shot HENRY: PORTRAIT OF A SERIAL KILLER on video and it would have turned out more or less the same (in fact, the most chilling moments in that film ARE shot-on-video). No, the reason most of these movies are terrible is because they try to be more than they possibly could ever be.

Case in point: SPINE, a 1986 slasher film written and directed by an ex-pornographer. It is routine and uninspired, just a sordid little tale about a nutjob with a hang-up going around slicing up nurses and plucking out their spines. That's not exactly the most exciting premise, but it gets the job done. All writer/director John Howard (and his co-director/co-writer Justin Simmons) had to do was keep it uncomplicated. Just deliver on the premise. There's no need to complicate things. With shot-on-video, your grasp should never exceed your reach.

Now, here's a word of advice from me to you, OK? Pay attention. If a shot-on-video film has a cop as a lead character, TURN IT OFF. Just do it. Turn that shit off and throw it away. Nothing good will ever come from it. SPINE, mostly because the film turned out to be far too short, has an entire throwaway plot line dealing with a few police detectives tracking down our mumbling, poorly written killer. I have absolutely no idea why the people making these kinds of films don't just rent police costumes from their local costume shop, but they never do. They slap toy badges on a couple of idiots dressed in street clothes, pin a map of the city onto a cork board in the middle of a room and think that we will all be convinced that these people are boys in blue. Any shot-on-video police character will speak in exposition, smoke multiple cigarettes in a single scene and grit their teeth anytime they're in close up. The shot-on-video cop is the single worst character in film history.

But thankfully, these characters only show up sporadically here. They mostly pop in from time to time to say “all the victims are nurses” or “I'm gonna get this guy” before pissing off for 15 minutes. The rest of the film is spent with our lead female characters, Carrie and Leah, as they're terrorized in their home by Lawrence, the one-eyed nurse hating psychopath. Problem is, the horror elements here are as weak as the police procedural elements. It's sloppy and disorganized, overwritten yet somehow also underwritten. Lawrence mumbles like a poor man's Frank Zito and his explosions of violence are laughable at best. Carrie and Leah are both nicely sympathetic and likeable, but they're never really developed as characters. They're just women in peril and that's not enough to earn our apprehension.

SPINE quickly deteriorates into blathering inanity before exploding once again in pseudo-off screen violence, and while I appreciated its willingness to ruthlessly kill off the central character, the film blows the whole damn thing by revealing that its final 20-25 minutes were all just a dream. Worse, this revelation doesn't end the film. It just adds a quasi-supernatural element to the proceedings. It feels profoundly out of place and frankly idiotic. Don't get me wrong, the entire damn film is idiotic, just a poorly written mess, but had this revelation started the film rather than ended the film, the circular nature of the climax would have had some kind of purpose behind it. It would have completely changed the nature of the film itself, but it would have been much, much better. In fact, it's the kind of thing this film needed to have working in its favor. As it stands, it's just a frustrating development that goes nowhere.

Had that change taken place and had the police procedural angle been removed (Howard and Simmons should have just expanded the time we spend with our true leads rather than complicating it with the worst cop stereotypes in existence), SPINE could have easily been a decent shot-on-video slasher flick. Slasher flicks can operate well enough within the confines of shot-on-video productions, but SPINE didn't want to be just another decent enough slasher film. It tried to be too damn much with too damn little and as a result, the film suffered. I have seen worse shot-on-video films in my life, but make no mistake, this does come close at times to scraping the bottom of the proverbial barrel.

Not a good film at all.
Posted by David Grant at 2:19:00 AM
Email ThisBlogThis!Share to TwitterShare to FacebookShare to Pinterest
Labels: 1986, shot on video, Slasher movie, Spine