THE GIALLO PROJECT - THE MONSTER OF VENICE 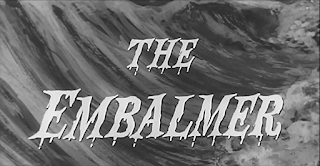 There's a killer loose in Venice. In the dead of night, the killer dresses in a diving suit, plucking nubile young lasses off the streets, drowning them in the canals. This unknown killer takes the corpses back to his hideout, a ruined monastery deep beneath the water. Using a special embalming fluid, he preserves their bodies, keeping them in glass cases. Andrea, a reporter for a local paper, knows there is a serial murderer among the populace, but the police won't have any of it, believing Andrea's theory is a ploy to sell papers. As more and more young women go missing, Andrea decides to track down the killer himself.

On paper, this is one hell of a setup. In execution, however, it's more than a little botched. When Dino Tavella's giallo THE MONSTER OF VENICE (easily found on DVD under its American title, THE EMBALMER) decides to focus on this strand of the narrative, the film works exceptionally well, if a little corny. But Tavella's film seems to forget its underlying murder mystery with staggering ease, giving nearly two-thirds of the running time over to your typical travelogue extravagances and weak romance. About a third of the way into the film, Maureen arrives, a teacher from Rome chaperoning a gaggle of pretty girls on a trip to Venice. Andrea and Maureen fall madly in love and thus begins the dramatic shift from modern Gothic horror to treacly melodrama.

The film picks back up during its final twenty minutes, but by then the effectiveness of the murder mystery angle has been largely neutered, if only because the film has worn out its welcome. That's a damn shame too, as the final act is where the film shines brightest, a descent into and then a chase through dimly lit, rotting, crumbling catacombs, complete with a room full of robed, skeletal monks. The killer's outfit, a crusty robe and cheap skeleton Halloween mask, actually becomes one of the most haunting images the film offers up and Tavella goes to great lengths to pile on the dread. There's a wonderful scene of the killer sitting among the dead monks, anxiously waiting for Maureen to wander by so he can grab at her. It's nicely effective stuff, but again, the effect is all for naught as Tavella can come up with nothing better to do during the climax than to have Andrea and the killer engage in a poorly shot, poorly choreographed fist fight that shatters credibility before plummeting down into unintentional comedy.

The real saving grace of THE MONSTER OF VENICE is its setting. There's something beautifully terrifying about Venice. It is equal parts tragic, haunting, lovely and unsettling. A drowned city, teetering on collapse, but so beautiful, so wonderfully mysterious. Tavella understands both the beauty and the terror of the city, and the moments when all we're doing is touring the city by gondola or walking through the streets are packed with hypnotic glory. Like in Nicolas Roeg's excellent DON'T LOOK NOW, Venice is a genuine character here. I just wish the film was as in love with its story as it is with its setting.

THE MONSTER OF VENICE
(Il mostro di Venezia, The Embalmer)

Posted by David Grant at 6:04:00 PM
Email ThisBlogThis!Share to TwitterShare to FacebookShare to Pinterest
Labels: Il mostro di Venezia, The Embalmer, The Giallo Project, The Monster of Venice