NIGHT OF THE DEMONS 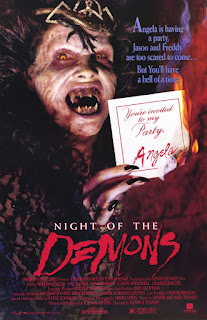 Break out the hairspray and crank up the Bauhaus, this is NIGHT OF THE DEMONS, the 1988 cult classic from WITCHBOARD director Kevin Tenney. When I first saw this film sitting on the shelf at the rental store, I thought it was a sequel of sorts to Lamberto Bava's DEMONS. I'm sure I wasn't the only person to have thought that. Amelia Kinkade's make-up job on the cover looks a bit like Geretta Geretta's ghoulish visage in DEMONS. The plot description on the back of the box wasn't all that dissimilar to the events of Bava's cult classic, even though this film takes place in a spook house instead of a theater. And really, if THE CHURCH can find itself subtitled DEMONS 3 here in the States… Well, anything goes really.

Even after watching it, I couldn't shake the feeling that Bava's film left quite an impression on the folks behind NIGHT OF THE DEMONS. Of course, I also noticed the homages to movies like THE EVIL DEAD and NIGHT OF THE LIVING DEAD, but damn it, DEMONS just wouldn't leave my mind. I never bothered to go back and watch the two films one after the other to do anything like a true comparison. Until today, that is. Oddly enough, it wasn't intentional. The films just happened to be sitting side-by-side on my To Watch pile. I won't bother you with a review of Lamberto Bava's film today (in fact, I may never write one because meh), but in watching both films, the suspicion that Tenney and Co. had, at the very least, seen and enjoyed Bava's flick was all but confirmed.

In a way, you could easily replace every single reference to NIGHT OF THE DEMONS with DEMONS and probably come away with the exact same review. Both films suffer the same problems and both films excel at the same things. They're definitely products of their time, riddled with cliches and stereotypes, but honestly neither film was ever meant to be more than a collection of cliches and stereotypes to begin with. They're both acutely aware of what they are, single minded about what they want to do, and both are far more intelligently put together than most people give them credit for.

Simply put, these films know they're corny, know they're flooded with routine archetypes, are proud of their spook show roots and all too happy to cater to the deviant wants and needs of their audiences. You often hear films referred to as “movies that are made for fans”. Well, NIGHT OF THE DEMONS is just that. This is a horror film made for horror film fans. It might be dumb as a rock, but it's as lovable and as eager to please as a puppy.

The film begins with a great animated credit sequence, the perfect way to introduce a film that is, by and large, a gooey, gross cartoon. We meet our bag of typical horror movie characters, like the virginal Judy, the loudmouth Stooge, the bad boy Sal and the sex pot Suzanne. They've all been invited by their mutual friend Angela to a Halloween party at the Hull House, a supposedly haunted house at the edge of town. There are whispers of the terrible history behind the ex-mortuary-turned-residence, tales of necrophilia and murder. Naturally, it isn't too long before our gaggle of stereotypes perform a séance and just like that, they're taken over one-by-one by something evil.

Like DEMONS, the plot is simple and to the point. The main difference between the two films (beside their settings) is in the way the set-up is paid off. For all its nasty gore effects, DEMONS, more or less, strays into action territory. It feels a bit like a siege movie at times. NIGHT OF THE DEMONS starts off as a ball achingly obvious spoof of teen horror films, descends into soft erotic horror at the mid point, and then resolves itself with a semi-serious attempt at actually being scary. In that regard, NIGHT OF THE DEMONS is missing the balls Bava displayed with his film. What it has instead, is boobs. Lots of boobs.

This is, after all, a film that introduces a main character with a rather inappropriately lengthy shot of her bent over posterior. NIGHT OF THE DEMONS, despite its supernatural underpinnings, relies more on slasher film conventions than it does on head spinning gags. The possessed females use their sexuality to lure their victims into traps, whether it be a nice, long kiss or a seemingly gentle fuck. The “show skin, show violence” formula is intact here. More often than not, a demon possessed individual will show up without warning behind a distracted character or make a sudden, noise accompanied entrance for a good bit of jump scariness. Characters are bumped off one after the other in ten minute intervals before the film settles down for a surprisingly long climactic chase.

And that's where the film basically loses all its forward momentum. Like DEMONS, NIGHT OF THE DEMONS is more fun as its setting up its end game than it is when it finally arrives there. Damn near 40 minutes passes before the demons are unleashed and the film burns through its supporting cast so quickly that we never really get to catch our breath. Sure, the film tosses us a few curve balls in its final act, like a certain male lead's demise and the wink-wink nudge-nudge survival of a certain person of color, but I found myself less interested in the film the more serious it became. Like Bava's film, the fun of it all lies in the self aware camp and the irreverence of its set-up. Both films descend into the territory of the mature as they go along, losing both their charm and their wit.

NIGHT OF THE DEMONS does give us a nice send off though in the form of an ironic wrap around featuring a bitter old man looking to kill some kids via razor blade-filled apples on Halloween night. It's the perfect end to the film, equally gory and funny. But it comes at the end of a final 30 minutes that strayed into safe territory and never looked back. The first hour of NIGHT OF THE DEMONS is its strongest, witty and funny, morbid and nasty. That hour alone earns this film whatever reputation it still has. Yeah, its final act is a bit of a letdown, but there is no denying that in a sea of horribly dull, terribly made horror films released in the late 1980s, NIGHT OF THE DEMONS remains a largely enjoyable, absolutely essential bit of horror movie goodness.
Posted by David Grant at 11:23:00 PM
Email ThisBlogThis!Share to TwitterShare to FacebookShare to Pinterest
Labels: 1988, Horror, Night of the Demons, Not the shitty remake