THE GIALLO PROJECT - THE MURDER CLINIC 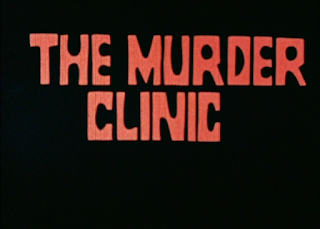 Elio Scardamaglia's THE MURDER CLINIC marks a first for the still growing filone. It's a period piece, set in the late 1800s. While watching the film, the time period seems apropos. It is every inch a Victorian Gothic melodrama, steeped in madness, repression and guilt, tied loosely together with a nice yellow ribbon. Pretty women skulk around dark corridors lit only by candlelight in search of answers to dangerous mysteries. Scenes like that exist in the more modern gialli of the 1960s, but THE MURDER CLINIC seems to be purposefully trying to recreate the Victorian Gothic rather than merely calling back to it, if not outright parodying it.

A good example of that sort of thing would be the opening scene of Mario Bava's THE GIRL WHO KNEW TOO MUCH, widely considered to be the first proper giallo film. We see Nora sitting on board a plane heading to Italy while a voice over informs us that Nora has an addiction to reading murder mysteries, a peculiar addiction that later calls into question whether or not Nora really did witness a murder and is now targeted for death. It might just be her murder mystery fueled imagination at work. Jane Austen's popular parody of Victorian Gothic melodrama, Northanger Abbey, likewise features a heroine with a particular obsession with a certain type of literature (in Catherine's case, Gothic novels). But in Austen's novel, Catherine's Gothic literature fueled imagination turns out to be fantasy. In Bava's film, Nora really is being hunted by a killer. Regardless of the difference, both Austen's novel and Bava's film use Gothic tropes to flesh out the backbone of their narratives, only to turn distinctly more modern as their stories unfold.

THE MURDER CLINIC however stays comfortably within the realm of the Victorian Gothic throughout, even as a straight razor wielding killer wreaks havoc on the narrative. The film concerns a small clinic somewhere in the English countryside. The man in charge is named Robert Vance. He has a wife named Lizabeth who has a frail heart and little patience for her husband's flirtations with some of his patients. Staying at the clinic are a bevy of interesting faces. There's Fred, a man prone to psychotic breaks, an elderly woman whose only friend is a stuffed cat, and Janey, a recently arrived mute. One night, Janey is chased from her room and slashed to ribbons by a killer. Vance discovers her body and buries it somewhere off the property. Unfortunately, someone knows about Vance's clandestine body disposal.

As all of this is going on, Gisele, a bitter, cheating wife, is being escorted back east by her husband. When their carriage breaks down, Gisele attempts an escape, clubbing her husband over the head. This spooks the horses and off they go into the distance, but not before trampling her husband to death. It is Gisele that sees Vance burying poor Janey's corpse. Gisele fakes an illness, taking advantage of Vance's lustful eye, and is brought back to the clinic where she proceeds to blackmail Vance into giving her an awful lot of money.

Vance has no choice but to pay up. You see, many years back, Vance was charged with attempted murder. Lizabeth's younger, prettier sister, Laura, had been visiting the couple at their soon to be constructed clinic when she suffered a horrible accident, falling into a pit filled with lime. The accident left her horribly scarred and Vance was brought to trial. Witnesses at the scene swore that they saw Vance push Laura into the lime, but a lack of physical evidence set him free. His reputation as a doctor ruined, Vance abandoned his dream of owning his own clinic and took the lead job at the nuthouse in the English countryside. If Gisele goes to the police, what little life Vance has will be over.

And amid all of this melodrama is Mary, the good-hearted nurse, madly in love with Vance. What about those strange noises that we hear coming from the attic? The noises that sound like footsteps? That would be Laura, the mad woman in the attic (the films very own Bertha Mason), kept there in seclusion as Vance works on curing her of her deformity through radical skin grafting experiments. Oh, and we can't forget about the killer, can we?

Except that the film does, because it doesn't quite feel like THE MURDER CLINIC was designed to ever be a straight forward murder mystery. The film was co-written by Ernesto Gastaldi, one of the great giallo screenwriters. THE MURDER CLINIC, in many, many ways, feels a dry run for Gastaldi's later giallo masterwork, YOUR VICE IS A LOCKED ROOM AND ONLY I HAVE THE KEY. Both films are built on the backs of Victorian Gothic literature tropes and both films are loaded with poisonous relationships, characters stuck in seemingly inescapable personal hells, and are rife with potential violence. Both films feature typical giallo killers slashing women to shreds, but neither film ever really commits to being a proper giallo film.

YOUR VICE IS A LOCKED ROOM AND ONLY I HAVE THE KEY is (more of less) an adaptation of Poe's The Black Cat, with the black gloved killer angle of the first half treated as a massive red herring, something that appears to have been included just to throw us off the films true motive. The killing scenes in THE MURDER CLINIC are more directly tied into the narrative, but they come off as afterthoughts, like they were given more and more emphasis as the script went through revisions.

That might be because the murder mystery angle of the film feels far less thought out than the more melodramatic angles. For example, it's a bit difficult to believe that Gisele would so brazenly attempt to blackmail Vance, especially when she believes him to be a cold blooded killer. The idea that Vance is keeping Laura in the attic isn't well thought out either. The film could have taken the more interesting EYES WITHOUT A FACE tactic of having Vance killing young women for their skin, all so he could carry out his guilt ridden experiments in skin grafting. I suppose we're meant to think that Laura is responsible for the killings, but the film never bothers to give her a proper motive. Fred is the only likely suspect the film offers up. There's a short scene of Fred attacking Gisele in her bedroom, a scene that only exists so the film can conjure up a believable guilty party.

THE MURDER CLINIC spends an awful lot of time (nearly 40 of its relatively short 87 minutes) just getting all of these characters under the same roof. It then spends another 15 or so minutes getting down to business working out the love triangles, the blackmail angle, telling us of Vance's troubled past and Laura's accident… It is one hell of a busy hour and through much of that hour, I was really engaged with the film. I was enjoying trying to figure out just who was playing who, why no one seemed all that bothered by Janey's first act murder, or where the film was going to take the characters as all these personalities began to clash and crumble.

Unfortunately, the film never really hits that high note of drama. It descends into slasher territory with characters dying left and right before petering out with a tired, easy resolution. However, I would say that the first hour or so more than makes up for the deficiencies of the final act. The murder mystery may not be the strongest, but the range of characters and the dramatic interplay between them is surprisingly delicious. I would have preferred the film to be longer. I would have preferred to have had the drama between the characters reach a boiling point and THEN have the killer step in to bring that drama to a bloody end. I think the film would have been better served that way. If THE MURDER CLINIC had more effectively tied the bloody business into its very well done melodramatic material, I would not hesitate in calling this film one of the best 1960s gialli out there. As it stands, I still recommend giving the film a watch, but I can't deny that it is, at the end of the day, kind of disappointing.