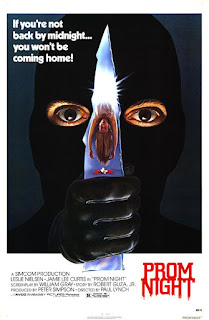 PROM NIGHT begins with the Past Trauma. A quartet of kids are playing hide and seek in an abandoned school house. Their juvenile shenanigans end when their friend, a little girl named Robin, takes a tumble out a window, falling to her death. The remaining kids, well aware that their needlessly callous behavior was what caused poor Robin to fall out the window, swear to never tell anyone that they played some part in the accident. The police begin their investigation, eventually targeting a sexual predator named Leonard Merch. When Merch's arrest goes south, the felon ends up badly burned. But no matter, the police have their man and Merch is swiftly institutionalized.

Six years later, we play catch up with our now teenage leads. Our original quartet – Wendy, Nick, Jude and Kelly – have all left the past in the past. Well, not all of them. Nick is still struggling with his guilt, something that is made all the more difficult to deal with as he is currently dating Kim, Robin's sister, and is even friends with her brother, Alex. Kim and Nick's relationship grates on Wendy's jealous nerves so she schemes with Lou, the high school bad boy, to play a naughty trick on Kim during the prom.

If they live that long.

Seems someone has it out for our leads, threatening them over the phone and vandalizing their lockers. Could it be Kim and Alex's father, the school principle? Is it Sykes, the weirdo school handyman? Or maybe it's Leonard Merch, the wrongfully convicted man. After all, he has recently escaped the asylum, leaving a dead nurse in his wake. Whoever it is, he or she is connected to the accident from six years ago. Something awfully bloody is about to go down at Hamilton High on the night of the big senior prom.

Time is a gigantic sieve. In the 1980s, slasher films were a dime a dozen, flooding theaters month in, month out at a relentless pace. Plenty of good films were wrongfully derided solely because they too closely resembled films that were rightfully derided. I remember watching slasher films in the 1980s and rolling my eyes the entire time, all because I had finished watching a similar film just two hours before. It's difficult to have perspective when you're bored with formula. I had been rendered numb by overexposure. Too many movies telling too many similar stories released in too short a time frame can add up to a seemingly insurmountable mountain of monotony. But time, that glorious bastard, has a way of taking a mountain of shit and separating out the diamonds. Plenty of slasher films have rightfully faded into obscurity. The ones that haven't are still around for damn good reasons. They're either spectacular trash or gnarly little gems.

PROM NIGHT is a definite gem of a slasher film. I remember seeing it on TV when I was a kid and thinking about how much it resembled HALLOWEEN and other films like it. But with a little hindsight, it's easy to see that PROM NIGHT is most definitely not like most slasher films. In fact, what really sets it apart is just how little “slasher film” this slasher film has in it.

By the time this 90 minute film hits the 60 minute mark, all of our characters are still breathing. There's a large amount of time given over to not just setting up the story, but purposefully misleading the audience into thinking the film will play out a specific way, only to change course a few scenes later, only to change course again. It relies on popular horror cliches to accomplish this. We have a sinister mystery man making phone calls to our guilty leads. Clearly, the killer will be Someone Who Knows What They Did Six Summers Ago. Then we move on to Merch, the escapee pursued by a cop and a psychologist, a la HALLOWEEN. Then we devolve into more personal thriller territory where our suspicions begin to be directed towards someone in our group of protagonists. While this is all going on, the film works in other bits of plot lifted from non-slasher horror films like CARRIE and more than a few moments lifted from non-horror teenage comedies or dramas.

In a way, PROM NIGHT reminds me of THE BURNING, another 1980s slasher film that spent more time developing the cast of characters than eviscerating them. Both films wait until the final third to really thin out the cast and both films are so much better for it. Simply put, suspense and horror work best when you actually care about the people trapped inside the celluloid, when the characters feel like people and not just bowling pins waiting to be knocked down. The characters on display in PROM NIGHT all have personality. They're all likeable. They might not look like teenagers, but they certainly act and talk like them. They have wants and needs and quirks and charm and the film goes so far out of its way to get you invested in their stupid little lives that when they finally shuffle off this mortal coil, it kinda sucks to see them go.

“But Dave”, you ask, “what about the horror in this horror movie?” Well, it exists. That much is for sure. PROM NIGHT features one or two well crafted stalking sequences, but for the most part, the violence is swift and never really lingered on. Of course, it was chopped to shit by the MPAA (worse, recent widescreen releases rob the film of its nudity thanks to cropping) so don't expect too much in the way of gore. However, there is a rather glorious scene of a disembodied head rolling across a dance floor, one of the all time great scenes in a 1980s slasher film.

But really, PROM NIGHT just is just as effective a slasher film as, say, FRIDAY THE 13TH: THE FINAL CHAPTER, just in a different way. It takes the giallo approach of being more character minded and steadily paced, leaving gory body count action for other films to indulge in. The attention to character gives immediacy to the set pieces and the finale is a diabolic downer. Far from being just another “me too” cash grab, PROM NIGHT is a genuinely good horror film, loaded with wit and charm. Depending on what you're looking for in a slasher film, it might come off as a bit long winded and anemic, but hey, it's not like you don't have 500 other 1980s slasher films to watch instead.
Posted by David Grant at 11:26:00 PM
Email ThisBlogThis!Share to TwitterShare to FacebookShare to Pinterest
Labels: 1980, Prom Night, Slasher film