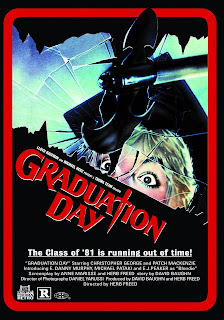 Sorry. I had to double check that I'm actually reviewing GRADUATION DAY and not FATAL GAMES.

So anyway, once the montage has tuckered itself out, we get to the grand instigation, the unfortunate death of a track and fielder as she crosses the finish line. The poor dead girl's name is Laura. The cause of death? A blood clot. Her boyfriend, Kevin, is moderately bummed about her passing, but everyone else just moves right along with their lives. It is, after all, graduation week.

Laura's sister, an ensign stationed in Guam, returns home, not for the funeral but to accept her dead sister's diploma in the graduation ceremony. She exchanges pleasantries with Kevin before all but disappearing from the first half of the movie. Meanwhile, the high school coach is on his way out, the blame for Laura's sudden death landing square in his overbearing lap. And the principle is having an affair with his blonde secretary, who is oh so cleverly named Blondie. And there's a pot smoking cop wandering around campus. And the music teacher is having sex with one of his students.

If you're wondering what any of these things have to do with one another, well… I don't have a fucking clue. I mean, there IS an unknown killer stalking and slashing Laura's teammates in hilariously cheap fashion, but the slasher action is so separated from all the other myriad bits of extraneous plot that the murders seem to be happening in a different movie altogether. It takes the film approximately 70 minutes before it remembers that its been offing teenagers left and right. In an attempt to cover that gaping plot hole, another cop makes a sudden appearance for no other reason than to say “yeah so like uhh a bunch of parents just realized that their uhh kids are missing sooooo...”

I would argue that the majority of the events in this film serve absolutely no purpose. Exactly what purpose does the principle serve, or his secretary, or the pothead cop, or the music teacher? None. They serve no purpose in the film whatsoever. Because this is a slasher film, right? So shouldn't we be spending time with the victims BEFORE we kill them off? Shouldn't they have personalities? Shouldn't they be, in some way, large or small, tied into the film instead of just lumped into the body count? I literally finished watching GRADUATION DAY 45 minutes ago. I cannot remember a single character's name outside of Blondie, Laura and Kevin. That's a huge problem.

And really, so is the motive for the killer. Believe me, within a half hour you will guess the identity of the killer. It's Kevin, the boyfriend, the only person who seems to remember (besides the coach anyway) that someone died at their school (and right in front of them, I might add) just a few days ago. But what exactly is the reason for Kevin's murder spree? It wasn't anyone's fault that Laura died of a blood clot. That kind of thing just happens. I mean, you could blame the coach, I guess. So kill the coach and be done with it. Why bother killing Laura's friends when they had absolutely nothing to do with it? I just recently reviewed PROM NIGHT. Watch the two films back to back and you'll see how this kind of thing should be done.

It would be like my 95 year old grandmother dying in her sleep and as a result, I decide to start butchering the employees of my local GameStop. That's how absurd the whole thing is. But even if we just forget the motive, the actual slashing in this slasher film is pathetic. For starters, the film does this weird thing of always having its characters walking along the same path in the woods, like these people are oblivious to the fact that their city has things called “streets”. A character (or two) will be shown walking along then the killer will casually stroll up behind them to put them out of their misery (and sometimes the knife the killer is carrying will literally be shooting blood out of its fake blade well before it even touches flesh). The indoor murder sequences are the same damn thing. The killer walks up behind his victim, the victim turns and says “what are you doing?”, and then BOOM. A piss poor effect will momentarily flash before our eyes and another person we don't care about disappears from the film. I mean, did these filmmakers really think they were being creative by having the killer stick a sword blade inside of a football before tossing it into someone's gut? I don't even need to go down the route of “dude, the ball would just deflate the second the blade ent...”. I don't even need to finish that sentence because the logic of it all doesn't matter. It's simply an idiotic scene. The fact that it is the single most memorable murder in the whole film says it all.

And when you have a slasher full of lazy set pieces, terrible special effects, and non-characters with non-personalities only doing things unrelated to the slasher business at hand, you have a film not worth recommending to anyone. I would love to tell you that there is some camp appeal to be had in GRADUATION DAY or that the cast (which includes Linnea Quigley, Christopher George, E. Danny Murphy and Michael Pataki) makes it all worth it, but I just cannot do that. This movie is terrible, no two ways about it. Stay away. Stay far, far away.
Posted by David Grant at 11:52:00 PM
Email ThisBlogThis!Share to TwitterShare to FacebookShare to Pinterest
Labels: Garbage, Graduation Day, Linnea Quigley, slasher, Slasher film